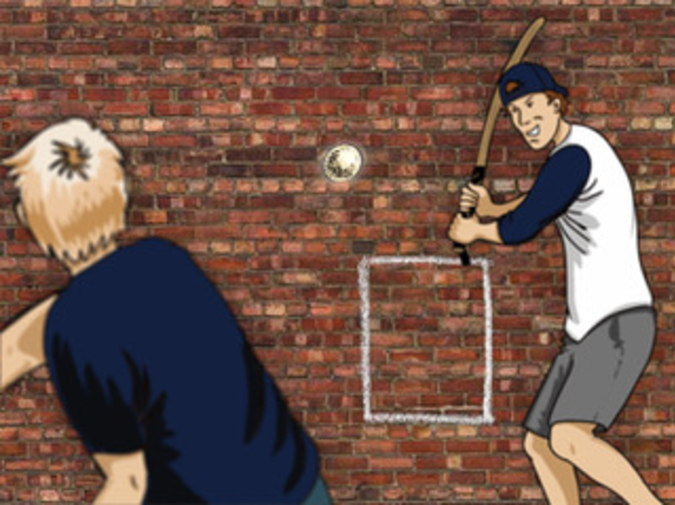 Mike and Nick and Tom are already playing stickball in the back lot when Dad drops you off at P.S. 236. On one brick wall they’ve chalked a strike zone, on the floor is a powder-blue pitcher’s mound and a bucket of tennis balls next to it, and behind the mound is a concrete crack filled with glass shards that you all call a fielding line. If the ball gets past the pitcher, a single. Past the fielding line, a double. Over the far back fence is a homer. No baserunners. You play automatics.

Teams of two: you and Tom, Mike and Nick. Mike is on the mound and Nick is at the fielding line. The bat is a headless broomstick and you let it sway over your right shoulder as the first pitch lands low. Mike takes another ball out the bucket and you bang the broomstick against the bottom of your shoe. The next pitch comes in high but you have to hack at it because the strike zone is drawn for their height, not yours—a pop-up barely behind the powder-blue mound, so Mike backpedals a bit and makes the catch.

“Always a fuckin’ pop-up,” you say, tossing the broomstick to Tom.

“It’s ’cause you drop your elbow,” Mike says.

“We’re playing with a bent broom and ten-cent tennis balls we got from the corner store,” Tom says as he settles next to the strike zone. “Doesn’t matter what you do.”

Nicholas DelloRusso delivers pasta sauce across New York City's five boroughs. He's currently enrolled in Adelphi University's MFA program. When not writing or driving, he’s pretty much a vagabond, crashing with family and friends somewhere in Brooklyn, Long Island, or Staten Island. His work can be found in Star 82 Review, Into the Void, and Nanoism. you can follow his very quiet Twitter account @Nickd929.