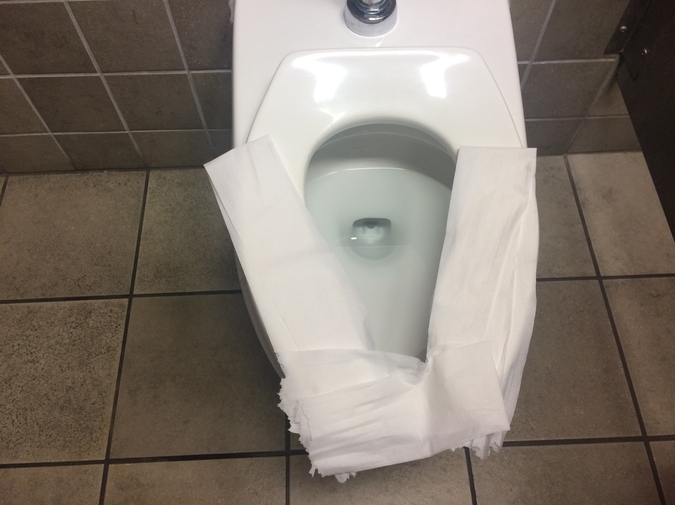 In the staff meeting she thought about enemas.  She thought about locking herself in the Ladies Room, where the lights dim automatically after eleven minutes if she sits very still.  She wanted also to vomit, but if she vomited she would pee her pants.  Maybe she wanted to do that, too.  She imagined a clean, warm bathroom, with white tile, many towels, and a thick cake of eucalyptus soap: a safe place to lie naked in her own effluvia.

She drew a row of tiny x’s across the top of her notepad.  She drew tinier o’s in the diamond shapes between the x’s.  She wondered why she needed to fill those spaces.

Procedures for administering enemas are recorded in the very earliest civilizations.  The ancient Egyptians had enema how-to papyri.

She wanted to burn her house down and lose everything.  Her books, and her frying pans, and her bed.  The bag of yarn and buttons.  Even her good Iverson snowshoes, the ones she varnished every summer and whose bindings had made permanent grooves in her winter hiking boots.  She wanted to stand over the steaming, noxious hole of her basement and kick chunks into the smolder.  It would smell terrible: burned plastic, hot metal, a toxic offering simmering unto heaven.  She wanted know there was nothing left to save.

King Louis XIII of France had more than two hundred enemas in one year.  Back then, it was called a clyster.

She reached across the conference table and picked up a donut with pink frosting and sprinkles.  She shook it once over the white bakery box to allow the loose sprinkles to tumble in with the other crumbs.  She placed the donut on her notepad next to her coffee mug, a greasy ‘O’ translucent on the page.  She wished her coffee was still hot.

She wanted to shave her head and lay on a flat orange rock in Utah until her skin blistered and peeled, until strips of muscle curled away from her bones.  She didn’t want it to hurt too much.

Saint Lawrence is said to have been barbecued alive for the crime of keeping lists.  He is the patron saint of cooks.  Legend quotes him as saying, “Turn me over, I’m done on this side.”

Her ass was sweating in the vinyl chair.  When she shifted her weight the chair made an obscene noise.  She knew her pants would stick to the backs of her thighs when, finally, she stood up.  In twenty minutes they would all stand, shaking their clothes away from their bodies, buttoning jackets, adjusting the waistbands of skirts, not making eye contact until appropriately resettled into themselves.

She licked the tip of her right index finger and pressed it on a blue sprinkle that had escaped to the blonde surface of the conference table.  She put the sprinkle in her mouth and chewed it between her front teeth.  One tiny bite, and gone.

Colovexus delivers powerful cleansing results or you get your money back.

She ate her donut.  She drank her coffee, now, before it got any colder.  She realized, after thinking about it, that there was no lock on the Ladies Room door.  The bathroom of her dreams was not in this building.

She was in love with the shredder.  Through the conference room wall she could hear the powerful growl of the Fellowes 485i cross-cut with self-oiling blades and the capacity to disincorporate paper for ten hours straight.  She envied the intern whose job it was to feed ancient books of green-bar reports into the machine’s patient slot, to watch the pages unfold and disappear.  She did her own shredding.  Phone messages, meeting notes, badly-formatted reports, obsolete files, page by doomed page grinding away, the motor smelling of warm electricity and the dust of lists.  She wondered what it would feel like to be the shredder.  Constantly fed and emptied, fed and emptied, accruing nothing.  The bin beneath the blades was large.  She could squeeze inside, let the confetti of all those words fill her ears and eyes.

Some of the colonic hydrotherapy clinics put photos of the shit they’ll clear out of you on their websites.  Some of the clinics cater to pets.

The kings of France were known to clyster a dog if it seemed unwell.

Ginny MacDonald lives in Michigan's Upper Peninsula with her husband and their dogs.  Her work has appeared or is forthcoming in Brevity, Sundog Lit, Temenos, and others.  This year, her green bean crop is spectacular.