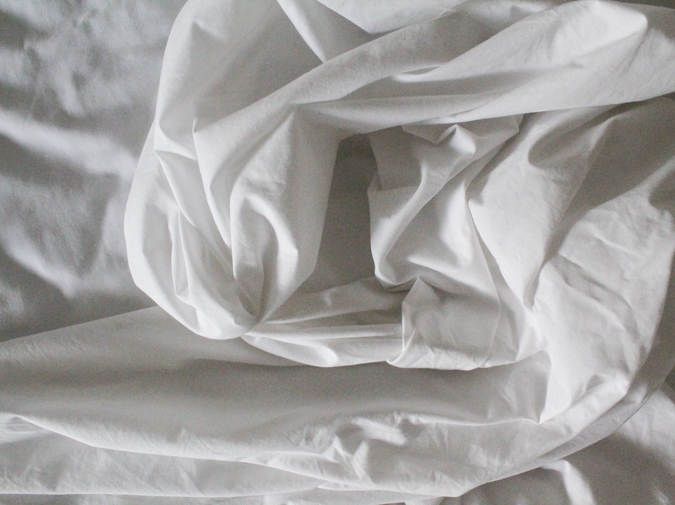 He shows up some nights. He follows me to my room, takes off his pants, and slides beneath the quilt. Sometimes we touch; sometimes he is so far away that the sheets stay cold between us. Always the smells of bourbon, rye, and beer stick to the blankets until I wash them. They linger there and I breathe them in and crumple them up.

He mostly comes on the weekends, usually a couple hours after the bars have closed. Sometimes earlier. I will see him three Saturdays in a row and then not see him for six months. I will think of him all June and not have him in my bed until July. One year he knocks on Valentine’s Day, I let him in, and before he comes to lie beside me, he pukes in the bathroom sink. When I clean it up the next morning I try to analyze it, but there is nothing in the brown, crusting mess that can tell me anything I want to know. It can only tell me that he ate meat and peas and carrots. Maybe that he ate some strange rendition of shepherd's pie, but it can’t even tell me that.

We used to live together. We fought over everything. We fought over produce. At the supermarket he told me that I spent too much time picking out watermelon. That he doesn't even like watermelon. That it is strange when I stand there and hold it up to my ear and shake it. When I knock on it. When I weigh two in my hands at once. He told me that he'd never seen a woman, a person, spend that much time cradling a fruit.

But that is how you choose a watermelon.

One time I see him in Boston after we no longer live together. He is standing on the littered sidewalk of a street I can’t remember. He is standing there puffing on a hand-rolled cigarette, looking like an old man. He’s not that old yet. When a bus headed to J.P. shows up, he flicks what’s left of his butt to the curb and boards without watching where it lands. I walk over and stub it out.

The first week I am alone I busy myself with plants. With ivy and ferns and peace lilies. With succulents, because the lady at the nursery tells me they’re easy. With orchids, because she tells me they're hard. I fill my sills with them; I have them draped over my furniture. Sitting in chairs, hanging from windows, resting on tables. The ones I put on top of the radiators burn up. Their leaves crinkle then drop.

Before he left there was a positive pregnancy test. A stick that showed two pink lines, one resting quietly next to the other. “Shit,” he said when I told him. His words slid down my body, just like the fetus did three weeks later.

After that, he became more careful. He accused me of pulling one over on him. Of purposely ignoring my pills. He slept with me less and less frequently, and when he did, when he had enough booze in his blood to lack the restraint, he pulled out and covered our sheets with his warm, sticky self.

I yell at him; I scream. I take his clothes and throw them out the window, out into the sickly, paved courtyard we share with nine other families. I tell him that I'm going to leave him. He becomes quieter and I become louder.

When he becomes so quiet that I cannot bear it, I follow him. I find him in bars and I hide myself. And when he leaves, I watch him. One time I find my way into an old apartment building and I knock on a door that I swore I saw him go behind. When no one answers I knock again and again until an old man opens it and yells at me for waking his wife.

After that I leave the building; I do not want to wake up any more wives.

When I get home, I roll myself up in the bed sheets like a slug. I roll myself up and then when it is not tight enough, I unroll and do it again. I do it so many times that I start to feel dizzy. And then I keep doing it. When I've at last rolled myself up tight enough to feel pressure equally dispersed across my calves and my knees and my thighs and my ass and my belly and my breasts and my shoulders, I stop. When he comes home in the early hours of the morning, I listen to the door creak open and wait for his footsteps to come into the room and find me. I wait for him to unravel me from the sheets, but when I hear his body collapse onto the couch, I know that he will not do that.

After he’s moved out I get a job at a daycare. I get a job playing blocks with babies and handing out paper cups of Goldfish. I get a job making Jello and passing it out and cleaning up dribble. I get a job vacuuming carpets and laying out nap mats and turning on movies and handing out blankets. I get a job calling parents and rocking newborns and playing dress-up and brushing hair and wiping urine off the toilet seat. They warn me when I'm caught handing out watermelon in class without permission. They fire me after a mother complains that her kid is allergic.

I go to the movies. I see a French film with a title I can’t pronounce. There is a man holding a woman on the movie poster. They have sex during the film and I wonder if she is on the pill. I wonder if he cares. Her eyes are closed and his are wide open.

In the theater the audience is mostly empty, with the exception of a few couples. I sit in the back-most row so that I can get two shows in one. So that I can see the bodies intertwine in the darkness and on the screen. There are no subtitles, but I don’t need words to know the story.

The first time he comes back to me, he says, “Don’t get used to this.” He says, “I’m just passing through.” Through town or city or street or state I wonder. I nod my head and he comes in. He says he likes what I’ve done with the place. He says he likes the plants. He holds me in bed that night while the radiators hammer their tunes and hiss their secrets. In the morning he gets up before me to take a shower.

While the water is going, I brush my hair and shave my legs in the kitchen sink. Because I can’t get to the mouthwash in the bathroom I gargle with dish soap. I vomit a little in my own mouth and then gargle that out with bourbon. Then I get naked and turn the handle of the bathroom door. It is locked. It is locked, so I put my pajamas back on as quickly as I can and hide back under the covers before the water stops and he comes out. He isn’t wrapped in a towel. He is already dressed. He leaves without saying anything.

After two months of nothing from him I start sending myself emails. I write the first half of the message in the subject line and the second half in the body, like little presents waiting to be opened. I write stuff like:

It works for a while, until I start replying to myself. I write back things like:

Re: But it is life and death.

Re: But I’m running out of time.

Re: But they’re already too cold.

My inbox becomes a festering wound. After a while I stop feeding it.

In the morning he tells me that I have soured.

I tell him that if I am souring, it is because of him. If I am fermenting, it is he that poured in the salt. If I am pickling, he is the vinegar. He laughs at me and walks out the door shaking his head.

When the eviction notice shows up on my door, I am already packed.

I write myself an email.

Subject: You will be

I do not reply to this one.

And then I leave. I leave and wonder if he will knock again on that door. If he will start softly and then bang harder and harder.

Instead, I lay naked under my covers and wait for something to happen.

Chelsey Grasso is currently an MFA candidate at UMass Boston. Her fiction has been published or is forthcoming in the Harvard Review Online, Carve Magazine, Mortar Magazine, and elsewhere. Her fiction also placed 2nd in the 2018 Martha’s Vineyard Institute of Creative Writing Contest.