So Many States from Home 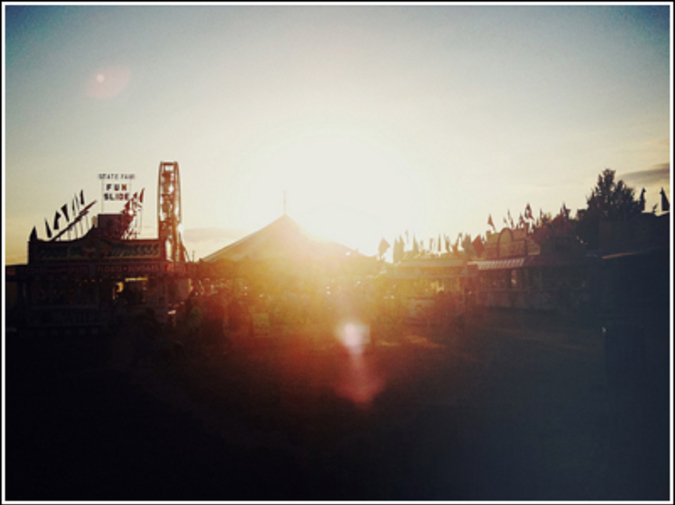 Bridget stands close to the speakers, too close, feels the bass of them pound through her chest, a drumbeat, a makeshift heart.  Owen stands next to her, tall pine, a foot above her.  She feels the jersey-soft brush of his shirt against her skin as they move, sway below strobe lights, as the DJ before them builds a beat, drives a pulse into the space where she should feel one.

Bridget closes her eyes, takes in the clatter, lets it drown out the slammed doors, stonewalled silences, shattered picture frames.  Nothing is packed.  No boxes stacked in her closet, no bags hidden in her car trunk.  But she lays awake at night, imagines studio apartments, turns away from Owen’s mounded shape turned away from her.  The rhythm builds, the throngs packed against her throw up their hands, and Bridget feels the sound crowd out the space between them, make it miniscule, make it transparent.

Owen stumbles against her, pushed by the waves of people, and Bridget thinks of the time her family drove to Florida, when she was seven, when the Peter Rabbit lunchbox she carried everywhere finally broke, when her parents tried to buy a new one.  She thinks of clinging to that lunchbox, dented, its handle broken though the matching Thermos could have been saved, her tears spurned by the thought of leaving it alone in a Dumpster, so many states from home.  The memory is arbitrary but it comes to her lately, more and more, in the middle of the night and now, here, in the bright-riot center of a packed, pulsing club.  Bridget feels Owen’s shirt again, against her back.  Featherlight, a heavy weight.  An unbearable charge, the will to let go.

Bridget looks back at Owen, up, and feels his hand line the small of her back, an instinct, a reassurance in crowds.  His touch has always been light, barely there, even back then when they walked home from a movie, first date, and Owen hugged her, no kiss.  A hug like a ghost, faint trace of baby powder, his skin like nothing of cologne or pine, his skin like home.

Bridget moves, feels her body shift with the beat, an acceleration to forget, to ignore what has brought her here though she knows, remembers anyway, senses the note in her back pocket as if it were bricks, not paper.  Owen’s notes, sticky-backed, the ones he leaves around the apartment as reminders.  Buy bread on the kitchen counter.  Call Mom on Monday, stuck below the peephole of the front door.  And this, in her pocket, taken from the bathroom mirror this morning.  Change oil in car, pen marks damp now with sweat, a note that as soon as Bridget pulled, pocketed, tucked away for safekeeping, she knew.

Bridget feels Owen move, begin to dance like her and everyone else who surrounds them, and the movement rips a tear, tiny fissure in her chest.  That she knows she will leave, that he doesn’t, that they both know and are here anyway, open pores, sweating each other from their skin.

The crowd around them gels into a mass, a moving, shuddering quake to disappear inside, and Bridget thinks of being a child again, in the backseat, letting her parents drive her anywhere without looking ahead, without knowing their destination.  She thinks of watching out the backseat window, at fields of cows, clouds molding into shapes overhead, rusted mailboxes tottering beyond their homes.  A letting go of another kind, she knows.  Of being free enough, of not watching out the front window, of trusting a driver enough to look away, even those uncertain behind the wheel.

Bridget feels the note in her pocket, its lines surely leaked to nothing legible to keep.  And Owen next to her, his body as riled as hers, as much a part of the roiling mass around them, as much a part of her that for a moment Bridget no longer knows who was uncertain, who let go, who pulled them from the backseat watching a rolling patchwork, orioles on telephone wires, the belt of Orion above them.

Anne Valente's fiction appears or is forthcoming in Hayden's Ferry Review, Berkeley Fiction Review, Unsaid, Annalemma, and Dzanc Books' Best of the Web 2010, among others.  She lives and teaches in Ohio.