Slung Out and Wayward 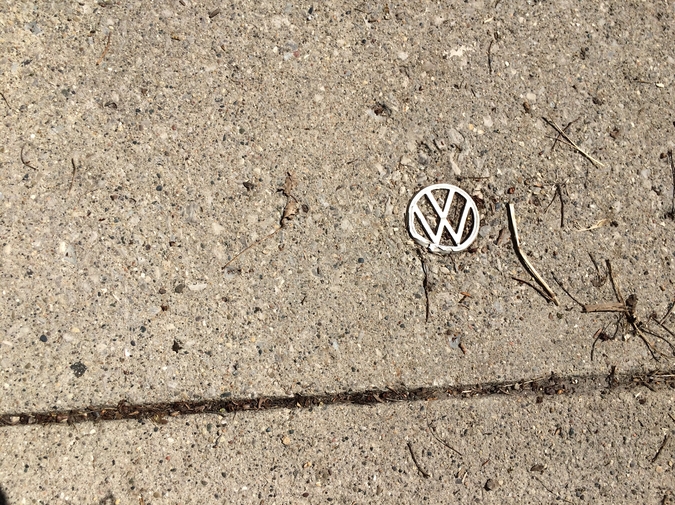 Gunderson waits on the porch, a bouquet of cash stuffed in his fist. The car that rolls up is an old tri-color hatchback, mustard and lime and urban rust, one of those discontinued brands from one of those discontinued countries in Eastern Europe. Gunderson could hear the vehicle’s noisy carping from eight blocks away, like a herd of wild trashcans rolling down the street. The backseat is blanketed in checkerboard flannel, obscuring some disreputable stainage, a ladies underwear garment knotted on the rearview mirror. The promotional Pete’s Pizza shark fin dangles from a dinky cord on the roof.

The pizza guy scoots out, stuffing his excess shirt length into his khakis. He has the springy, confident gait of the blond young men Gunderson sometimes sees loping around library book sales, surfer philosopher types, shaman ski bums, their arms full of musty naturist tracts, their faces saddled, too, with a handsome oblivion. The pizza guy isn’t carrying any books. He’s not carrying any pizza, either. He stares at the twenty rumpled singles that Gunderson is waggling at him in ritualistic offering: take it, take it, take it. The pizza guy shrugs and snatches the money. He counts it, folds it, stuffs it in the pocket of his matador-red polo shirt, where the embroidered Pete’s logo on his left nipple is growing sweat rings.

The guy trots down the steps and lies flat on the sidewalk. He folds his arm over his face, shading his vision from the sun.

Gunderson flexes his empty hand, gaping at it.

“The fuck did you say?” the pizza guy snaps.

The guy lifts his head and periscopes it around: the car, Gunderson, the car again.

“Nobody said anything about pizza,” the pizza guy says, his free arm reaching into his pocket and pulling out a nametag that he pins lopsidedly to a drenched pectoral.

Gunderson steps down to the sidewalk and scrutinizes the thing. “Ranch?”

“I already told you. Nobody mentioned anything about any goddamn motherhumping extra large ham-and-pineapple pizza.”

“What is this?” Rance shouts. “A legal fucking inquiry? I got a job to do.” He mummy-folds his arms across his skinny chest. He flops his arms at his sides. He fidgets and rolls over, glaring at his vehicle.

“Beauty is a goddamn lie,” he whispers.

Gunderson remembers the news reports from his youth about this particular model and its proclivity for spontaneous immolation. Thousands of hatchbacks, gleaming and modestly priced, idling in commuter traffic in every financially harried country on the planet, quaintly smoldering like yule logs.

“I thought they outlawed those deathtraps,” Gunderson says.

Rance is still trying to settle his fussing limbs on the sidewalk. His expression flares.

“Car originally belonged to my brother. My older, smarter, deader brother. He bequeathed me it in his last will and testament, which he scrawled in sharpie on a crinkled taco wrapper. You know the word bequeathed? You got anything snide to say about that, dick drip?”

“Was he inside the car when it exploded?” Gunderson asks.

Gunderson taps Rance with his loafer, as if testing him for some secret utility. Footstool? Speed bump? Loquacious cadaver?

“Is this what I am? Some sort of gimmick for you?” Rance rocks his bottom jaw back-and-forth, ireful but oddly serene. “Don’t be so fucking frivolous.”

He clambers to his feet, untucking and retucking the long red shirt.

“I assume this place has a public commode,” Rance says, already unbuckling his belt and striding headlong into Gunderson’s apartment.

The view from Gunderson’s living room is mostly tree thicket and vinyl siding with a smattering of midcentury brick, seen through a bay window that lacks curtains or slats. Gunderson once tried to shop for window treatments at the local mall, one of those cavernous glooming emporiums, derelict on a Tuesday morning. He randomly selected one of the six department stores and got halfway inside, but the sight of so many headless mannequins luridly dressed had addled him badly, baffling his red blood cells, overtaxing his glands. Gunderson fled without ever crossing the threshold into housewares. Now he stands similarly stricken in his own apartment, taking half-hearted inventory of his half-full bookshelves. Not a single naturist tract among them. He does, however, own plenty of medical dictionaries, plus a strange, immutable volume titled The Cosmic Malignancy.

Gunderson is blowing the dust from the ruts and bindings when Rance exits the bathroom, flapping his arms in concentric circles, air-drying them.

“Somebody pissed all down the side of your toilet,” Rance says, giving the last word a sophisticated French torque: twallet. “Not very hospitable conditions, man. Is it just you living in this dump?”

He plucks a battered hardback off the shelf, sniffs it, then dropkicks it with nary a glance. “You should see my pad. Total party hour. Wall-to-wall pussy.” Rance gives an impish chuckle. “That’s a cat joke. I got lots of cats.”

He leers at the window, the thrift-store furniture. The punted book is gone, disposed of, perhaps, by the cosmic malignancy. “You’re just in here callously flaunting your life, is that it? Not much here to flaunt.”

“The plumbing guy came by last week to fix a drip in the ceiling.” Gunderson nods up at the sketchy patch job. “He said the same thing. The air and heat guy, too.”

“Good for them,” Rance replies. “They can sleep in the bathtub. I got dibs on the bed. You should know I’m an early riser. I like to shower in the morning and again at night, so schedule your daily enemas accordingly. I don’t like roomies poaching my breakfast bagels, so I’m gonna need my own fridge with its own padlock. My job entitles me to cold leftovers when deadbeats like you don’t pay for them. These pies and garlic knots ain’t for sharing. This ain’t some hippie socialist utopia deal.” His voice pitches up an earnest octave. “Maybe we should get all this in writing?”

Rance pivots quickly and jams a finger in Gunderson’s snout.

“What’s that? You think I’d never deign to live in a shithole like this? Just because I am a man of luxury appetites?”

He walks over and sinks himself upon the crunchy springs of Gunderson’s broken couch. He brushes off a bug or two, cold leftovers from the exterminator’s last visit. The movement seems to soften him, unfastening some intricate tangle in his spine.

“You know how I got that vehicle out front?” he asks.

Gunderson hovers over the far lip of the couch, lowering slowly, to cantilever his weight so as not to jab his rump with rusty springs or squash more insects. “Your brother.”

“My brother,” Rance says rigidly, “was an astonishing dude. He used to razz the shit out of me, but I never minded it. He had this head of freakish white hair. Blizzard white, whiteout white. That hair amazed everybody. He liked to tell all sorts of wild stories about how he lost the pigment. Like he’d been zapped by lightning or caught some crusty Mayan curse. You know, stoner folklore. Everybody loved his little bits. Only I knew the truth. He bleached the shit outta that hair with photo developer. Hardcore, right? He built his own special dark room he called Kinski’s Corner, although nobody knew who the fuck Kinski was. He dunked his whole head in the big open trays. Those chemicals ain’t the safest thing. He sprouted tumors all over his frontal lobe. The chemo treatments killed off that glorious hair. He eventually died a sad, bald bachelor. You ever hear about the Twenty-Seven Club? Jimi, Janis, Morrison, that squirrely little dude with the fuzz on his chin? My brother overshot it by five months. So much for glory.”

Rance looks up from his lap, his eyes drippy, reflective. He’s annexed most of the couch with his arms and legs slung out and wayward. Gunderson, nestled on his own uncomfortable sliver of something, is counting the unrepaired rot holes in the ceiling, sundried bug shells on the windowsill.

He looks at the bookcase hungrily.

Rance turns on his side, nuzzling the unshaven upholstery, and shuts his eyes. “I still see that dude in my dreams sometimes. His hair is all grown back, but it looks different. Totally different.”

He tees up a beetle on the arm ledge of the couch, utters a short prayer, and finger-flicks it into the next life.

The house is dark. The streetlamps have gone dormant. Gunderson is awake in bed, his table clock still zeroed after last week’s blackout. That night: It had been late evening and he was relentlessly vacuuming the rug in the hall, the only rug he owns, passing over the same limp swath again and again, mollified by cheerless repetition, idiot routine. The lights died, the vacuum sputtered off. Gunderson stepped outside. All his neighbors had vacated their dim homes, too, and were milling in the roadway in various states of bewilderment and undress, hugging unplugged hairdryers, college diplomas. The mild cataclysm turned everyone jubilant. Gunderson introduced himself to the citizens he had lived wordlessly among for years. Everyone made plans for group dinners, neighborhood luaus, garage sales, movie nights. Gunderson even obtained the phone number of an attractive young woman in a neon tube top, with a flaky skin condition and barcodes tattooed on her exposed clavicles. When the electricity returned, everyone shook hands and strolled inside and locked their windows and doors. They hadn’t seen or spoken to each other since.

Gunderson stares wistfully at his amnesiac clock. He looks up and notices the posture in the doorway. The man is listing unnaturally to one side. He’s tucking in his overlarge red shirt, although now the shirt seems to fit him. He soothes the fabric around his scrawny equator, ratchets his belt tight, steadily gazing at Gunderson in bed. No jubilation, no dread. Just a lonely stare. He digs around his shirt pocket and pulls out the crumpled bills.

Both men consider the cash.

“The thing is?” Gunderson says, without any revelation, without any shiver. “I don’t think I ordered a pizza.”

He shrugs and crams the cash back into his pocket, his mouth twisted, something constipated in his face. “You smell that?”

“Sometimes I get so sick of it.” Rance shakes his head. “Fucking hair bleach.”

He ambles down the hall, a raspy shuffle across faded hardwood, the sound of him smaller and smaller.

Gunderson hears the front door groan open, but it doesn’t click closed. When he gets up several hours later to inspect, he finds the door is indeed shut. All his lifeless books and malnourished furniture and spackle patches and dead bugs and the pathetic carpet are still in place, but they look at Gunderson suspiciously.

They look at him as if he’s never been here at all.

David Nutt is the author of The Great American Suction (Tyrant Books, 2019). He lives in Ithaca, New York, with his wife and dog and two cats.