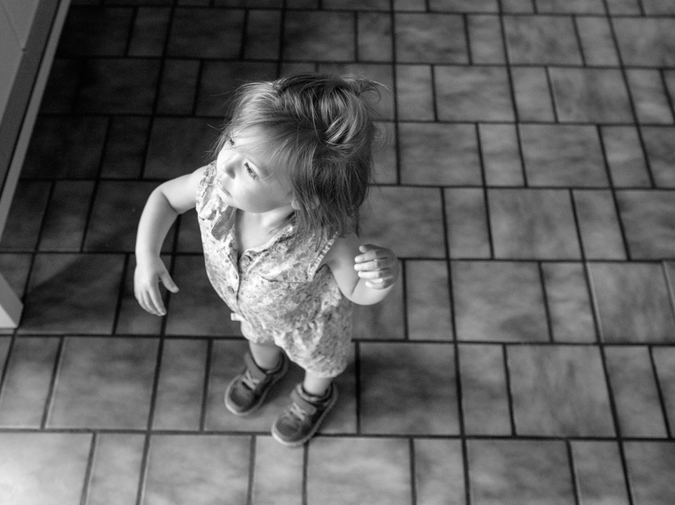 My daughter stood on tiptoe by the metal grocery cart and told me we needed two more bags of Colby Jack. I withdrew my upper body from a glass-door refrigerator in a long wall of glass-door refrigerators. I held half a dozen plastic bags of shredded cheese: two mozzarella, two Mexican blend, and four of Colby Jack. She counted as I dropped the bags in the cart. Just then, her little brother reached up from behind and gave her left ear a tug.

“Keep your hands to yourself,” I told him.

“But she didn’t tell me to stop.” He grunted then launched into his case: “Less than one minute ago, we were playing a game in which her ear was her pause button. She let me do the same thing at least five times, and she did not tell me the game was over.”

A smartly dressed woman stopped nearby. She must have been my age or older, and her boots, coat, and earrings said she had money. With her back to a freezer box full of pizzas, she watched our conversation.

For some reason, I wanted to impress her. I knew that our little conversation resonated with the much broader cultural conversation about sexual harassment, assault, power, and consent—which is to say that, by teaching my son respect for his sister’s bodily autonomy, I meant to show that perhaps there was hope for healing this misogynistic world. Anyway, I’m trying to get this right and trying to be completely honest, and all of this flashed through my brain in the blur of half a second.

“Even if you didn’t hear her the first time—”

“There was no first time—”

“—you still have to make sure it’s OK to touch her like that before you do it.”

“No buts, man,” I said. The woman watched me closely now. “You always have to ask first, and if she says ‘no’ it means no. Every time.”

He shook his head and stomped off toward an end-cap display of artisanal sourdough breads.

I smiled at the woman standing nearby, but she was tapping her cell phone. As I bent my torso back into the refrigerator case for more Colby Jacks, I imagined that perhaps this sophisticated feminist was announcing to her Facebook friends that there was, indeed, one good man out here in the world, teaching his son to respect women’s bodies. I wondered how many Likes her post would get, how many hearts, how many open-mouthed wows and weeping yellow faces.

But as I turned back to put the cheese in the cart, it occurred to me that perhaps she was just waiting for me to get the hell out of her way so she could grab her own bags of cheese. I nodded. She avoided eye contact. And my daughter held the corner of the cart as we rolled down the aisle in search of yogurt cups.

Eric Bosse is the author of Magnificent Mistakes, in more senses than one. His stories have appeared in The Sun, Zoetrope, The Collagist, FRiGG, Wigleaf, and New World Writing. He lives in Oklahoma with his wife and kids.