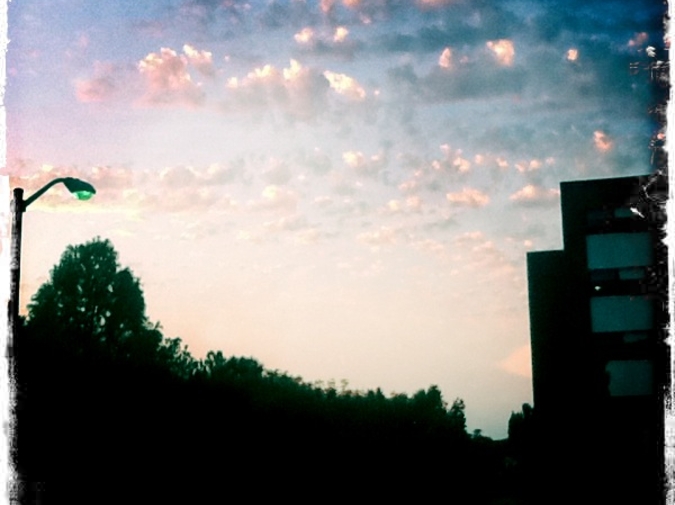 It is not the anniversary of her death that wrecks me but a day some weeks before it. It is the anniversary of the day I sat on my porch, barefoot, polyester graduation trappings in hand, and thought to call her but then did not because I was too busy.

The traditional date of mourning passed without my notice. I spent it working.

I wrote about her dying the first time because I had five days to write fifteen pages and she slipped in to every story. I thought if I let her have one in its entirety, I could write her out of me. I submitted the thing late on a Thursday night, laughing, but then they took it.

If she could talk she’d say, Of course they took it. The vowels would be long and heavy in her mouth, come out with a smirk propped up by her wild faith in me and propensity to joke about her own death.

My contributor’s copies arrived the day before the anniversary of her dying, the cover featuring a snake that looks remarkably like the ouroboros tattooed on the nape of my neck. If I try, I can interpret everything as a strange coincidence, like the universe is shaping itself around me as an object with too much gravity. But in some ways her death was like a melodrama’s plot, complete with heavy-handed imagery—driving past a truck fire billowing smoke as I learned about her coma.

Her death left a space my body collapsed in upon. The attendant shifting, everything repositioned five inches southwest, revealed the inevitable fallibility of all bodies, of my body. And so as I swallow the mourning stew I sometimes crack my teeth on bones of selfish fear.

My grief and anxiety have become boring and embarrassing in their long-reaching effects. Still? My stomach shifts at an insulin pump clipped to a belt buckle. My hands wander of their own volition to check lymph nodes, pressing lightly around the clavicles, the creases of my hips. My brain spins narratives of disaster rather than traffic while I wait for friends. Still.

My overthinking serves me well in my work, but poorly in my relations with others. When I learned about her coma I didn’t say anything to anyone. I sat and imagined futures:

Would she die? Would she not die? Should I hope? Should I resign myself and start being sad immediately, in case she did die? What was this going to feel like? What was the correct thing to do?

This bothers me, like I was making a story about her dying before she was gone. It bothers me, too, that my grief has manifested in such an outward, traceable fashion. Surely she is more exceptional—this must be the thought of all mourners. What happened in between the knowing and the thinking is a muddled blur with surprising, random sharp edges.

Some lessons must be learned again and again: When her mother calls me and leaves no message, I do not call her back and choose to believe it was a misdial. To overcome myself.

A week before the anniversary of her death, a writer-friend replied to my musings, No offense, but I really hope people don't count off the years I've been dead. I wasn’t offended, but I think the point of life is to have enough brightness inside of it that we are missed when gone. Maybe I misunderstood. Him. The point of life. Or both.

Isn’t that what writing is—I heard this somewhere—a small pushing back against our inevitable mortality?

I wrote about her dying again because she came back. She exists now only as an insistent pressing at the soft spots in my skull, particularly those near the corners of my eyes. She slips again into pages where she shouldn’t. The good news is this kind of haunting seems relatively common in writers, that we return to those themes and subjects that disrupt our easy passage through the days.

It is no longer the space she left that wrecks me. My organs have settled in their new positions, the exposed nerves are dulled. It is my perhapsing that hurts, my What ifs? that inevitably drift into regret. There is nothing new to add to the litany of the bereaved. The most useless, mundane phrases are coming out of my throat: I’m sorry I didn’t call.

Alysia Sawchyn currently lives in Tampa, Florida, where she is a nonfiction editor for Sweet: A Literary Confection. Her writing has appeared or is forthcoming in Fourth Genre, Indiana Review, Southeast Review, and other journals.