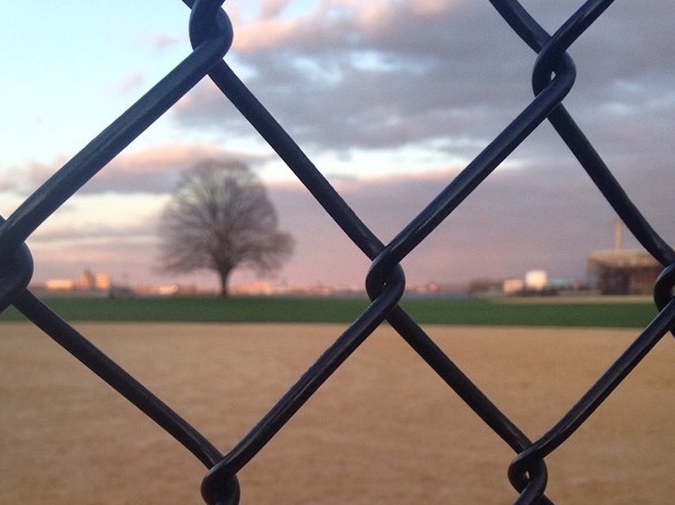 For now this is the only thing—this fence and over it the barbed thistle and thin briar where I have dropped down out of the air. The boys playing start arguing if I am a homerun or an automatic out because someone will have to hop the fence, reach in, and feel around for my red stitching, which feels like two centipedes crawling away from each other. When they decide I am the tying run, the boy who hit me rounds the bases. His team hollers at him and the sun begins to set. But I belong to the boy climbing the cyclone fence to fetch me. He is the only boy wearing long sleeves, and those sleeves are attached to the only nice shirt he has which is supposed to be worn to church tomorrow. When he lifts me out of the bushes and holds me up with his thorn-snagged sleeve, his team yells hurry up. But I see the look on his face, the lawn sprinklers waving back and forth like paper fans, the cicadas and their dim crescendoing dirge, and the panicgrass that the boy runs back through as he realizes what fetching me will cost him. His face looks like a boy who fears the wrath of God. He thinks how God is like a father who will twist the top of his ear down toward his cheek, leading him across a knee. He thinks of all the blood that will rush to his cheeks and his jaw as he tries to explain sacrifice and the tears in his sleeves. The boy’s father will take me away and place me on a high shelf as the boy tries to explain how it all had to go on.

John McCarthy is an MFA candidate at Southern Illinois University Carbondale. His work appears or is forthcoming in Best New Poets 2015, Copper Nickel, New South, Redivider, and Sycamore Review, and he is the 2016 winner of The Pinch Literary Award in Poetry. John is the author of Ghost County (Midwestern Gothic Press, 2016).

Jennifer Didik has held various positions in publishing over the last decade. A contributor to coverspy.com, she is on Twitter (@jendidik), Tumblr (jenhedonia.tumblr.com) and Instagram (@jenhedonia). Raised in Central Jersey, she now lives in Brooklyn.