Scenes from the Elephant Garden 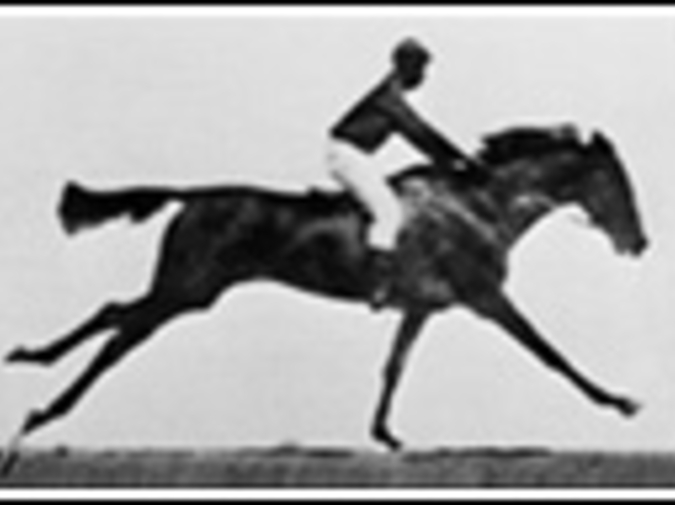 Eadweard Muybridge invented the photographic process called stop-motion photography, his most famous a series of stills illustrating a horse at full speed. My memories of our first house near Sarasota I recall in such dissected animation, with so few frames per second that everyone seems anxious, jittery, as if they knew what was coming. Time has diminished the quality of the images, and I worry that some day I will call upon them and find they have disintegrated like the celluloid of many early films, and I will have lost not just the house, but the man I knew then as my father.

He was small, my father, very small, and talked a lot to compensate. After asking him to comment on the weather, the hapless stranger would be pelted with five minutes of barometric pressure readings. My mother agreed to marry him before being asked, she often joked, in the hope that it would cut short his proposal, but he wouldn't take yes for an answer until he had finished the question.

He blamed all of the bad things on his diminutive stature: his health problems, his failure to get promoted, his inability to get good service at the market, even the panic of 1929 (which, I later learned, happened before his birth). These were the bedtime stories he told, designed either to gain sympathy for himself, or to educate me on the cruelties and inequities of the world; perhaps both. He claimed it necessary for him to work twice as hard as the average-sized male to earn an equal wage. "Remember that when you get older," he advised. "If you want to work less, wear lifts." Cowboy boots, I later discovered, serve the same purpose.

The house, a cottage really, was built on stilts forty years earlier alongside a major thoroughfare. His parents, also little people, had purchased it after retiring from the circus and he inherited the mortgage after their deaths. It lacked much of a yard. Every time the city workers repaved the street over the years they had taken a bit more off the front. The cigarette butts from passing cars sometimes landed on our porch, a particular hazard in those dry periods between hurricanes. We kept a bucket of water there just in case, but never had to use it. According to my father, the homes on our street were permitted to continue standing only because they provided a sound barrier between the traffic and the gated communities west of us that faced the beach.

He often complained about our lack of space for a garden, limited to a pot of herbs or a patch of day lilies, although he had no patience for tending one. "A proper dÃ©cor must include plants," he stated, illustrating his point with magazines. He hinted that mother should take the initiative, but she played stupid, disinterested in adding chores to her list.

When we first moved into the neighborhood, I was very young, perhaps three. My father, who was still studying for a degree in actuarial science, was employed in the mail room of an insurance company. His wages never quite covered the expense of supporting my mother and me. Although Grandpa Tito, who owned a coffee plantation in Costa Rica, offered to help out, father refused. He didn't like the idea of living off of his wife's family, he always said. However, if the money arrived by inconspicuous means, such as an envelope slipped into his overcoat pocket, he would not send it back.

This did not happen often. Without consulting me, my parents decided one day to sublet part of my bedroom to help pay the bills. My mother had my shirt halfway over my head at bedtime that evening when a tall silhouette walked through the open door, far too tall to belong to my father, who was attending a night class.

"There's someone here," I cried, squirming. The man's skin glistened, probably from the layer upon layer of suntan oil he must have applied to become so dark.

"Hush. That's just Mr. Diasco, dear. He's going to be living with us for a little while."

"In my room?" I can still see him, his skin roasted, often peeling, always waiting, hovering, blowing smoke from his cigarettes to form a cloud over my bed, occasionally encouraging me to talk to him, to tell him my secrets; and my eyes would be there, just above the linen sheet, icy with distrust, refusing to reveal anything. I never talked to him in more than one or two word phrases.

My father shared my distrust of our boarder. He never said anything but smiled whenever I mistakenly called the man Mr. Diablo (which I did on purpose). I think father worked so hard so that we could be rid of him as soon as possible.

My mother complained about my father's frequent absences, although she knew he was doing it to better provide for us. One day, I think to make it up to her, the idea of a dinner party occurred to him. "But we must have plants in the house," he said. "It looks naked otherwise."

My mother pointed out that there was no time to grow plants by seed, and no money to raid a nursery.

"I'll just make them," he announced, and went to work in the car port. Using an odd assortment of found objects, he constructed a marvelous little tropical forest. I assisted by holding things together until the glue hardened. He favored miniature palms, combining mailing tubes for the trunks with large gray shields of leather for the leaves. He made me promise not to discuss them aloud. "They're elephant ears," he whispered, "from the elephant graveyard. If the elders of the herd learn we have them, they will march right out of the jungle and trample us while we sleep. So keep quiet. They can hear voices from miles away." I didn't know that the nearest jungle with elephants was on the other side of an ocean.

We arranged a couple of the finished plants on the porch. Then we tip-toed those that remained into the house and shuffled them around to various positions. Since we had only a few scattered furnishings, left behind when the estate was divided, many options presented themselves. After careful consideration he found an arrangement that appealed to him.

On the night of the party, father fished for compliments without success, and then finally asked each couple in turn what they thought of his creations. When the guests politely agreed the color was all wrong, green for plants being more to their tastes, he pouted and refused to serve the coffee and sponge cake. My mother and our border laughed at him after the guests dispersed. He never forgave her for that.

A few months later, on a crisp and clear night, I was in the bathtub. A jet of water roared from the spigot, crashing into the tub, an ancient one that stood on six ball-on-claw legs. The lip of this enormous porcelain creature almost came up to my own, so that I required assistance getting in and out. Steam filled the room and oozed into the hall.

Her raven hair smelled of honey and her breath of rum. Her whispers seemed to fill every corner of the almost empty house, explaining that soon I would have a new father, and that I would have a bedroom all to myself again.

"What?" I could not understand how it was possible.

Mr. Diasco appeared in the doorway and pinched her ass. She jerked and waved him away. "Just a minute," she told him before turning back to me.

"Iâ€™m doing it for you," she said, then hovered a moment in the doorway to see how I was taking it. I just stared at her. Satisfied, she closed the door behind her.

I was alone in my room that same night when I heard them run into one of the palm trees as they came down the hall, and then my mother cursing the lot of them. She must not know, I thought. Unable to sleep, I waited and listened for the thunder of the angry herd, marching toward our little house. I was sure they would be coming to crush her. And, I hoped, the other too.

The commotion started after an hour or so. A window was smashed. I heard both of my parents. My mother was screaming in Spanish, my father in English, their voices on top of one another, first inside and then on the porch. I got out of bed and crept down the hall. No elephants. Just their ears, ripped from the fake palms and strewn about the floor. Once the shouting stopped I went outside. I saw her first, standing next to Mr. Diasco, crying. He stood there in his underwear and, as usual, smoked a cigarette. The devil for sure. He exhaled while he looked at me. Then his eyes steered mine toward the bottom of the stairs. My father was lying there, his body twisted, broken.

A passing car spotlighted him for a passing moment and I realized for the first time just how small a body he had. Of all the things I recall about him, there is always that one image of the last scene, that one frozen frame, and then all motion stops.

J. R. Salling is an antiquarian bookseller specializing in the history of science and medicine, a fact sometimes reflected in his written work, more often not. His writings have appeared in many publications including Pindeldyboz, Flashquake, elimae, Eyeshot, T-Zero, Thieves Jargon, Mad Hatters' Review, and Rose & Thorn.