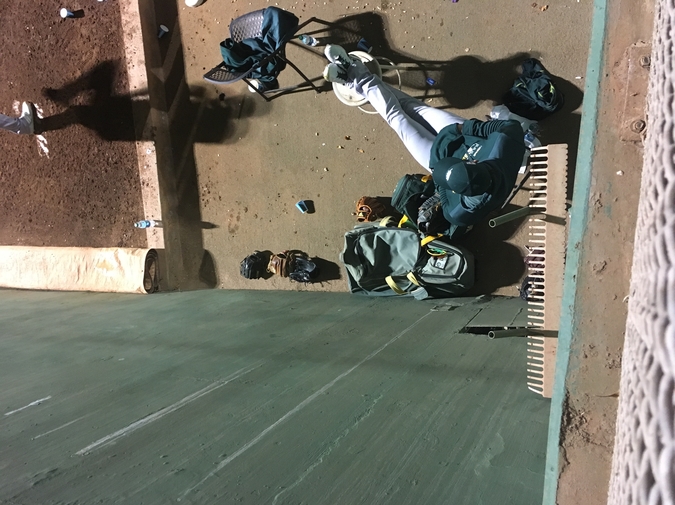 I watched Jim Johnson try to close out the 9thin front of a half-capacity Camden Yards. My father was supposed to come, but he was six blocks up at Mercy Hospital relearning to use the left side of his body. I offered to skip, to watch the game in his room, but he told me not to waste the tickets—use mine and sell his, buy a couple beers with the money.

Late August, the sun rested like a warm palm on my scalp. Three tallboys in, I’d become obsessed with Johnson’s pre-pitch ritual—rather, his lack of one. The wind-up, that was all technique, but the look-in, where the pitcher waits for the catcher’s selection then sets himself on the mound, that pose was superstition. Tazawa always adjusted the fit of his jersey. Kimbrel had that awkward bend and arm dangle. Johnson just stood on his heels, shoulders facing home plate, his throwing hand hidden in the glove at his waist. He looked like the no-frills definition of a closer—his form designed to get from pitch to pitch without interruption. His job was to send us home.

As a child, I didn’t know the difference between superstition and fear. When we’d run away, the food had been scarce. I never left a scrap uneaten for fear of never seeing another scrap again. For years, I blindly loved my disappeared father because I thought doing so would keep him safe. He wasn’t in some faraway place, just down the way in Jessup, locked up for back child support. Still, I kept my curses squared under my tongue.

After five years and treatment for his PTSD, we started visitation. On those days, I’d wait hours on the curb for him to show up. I played nonsensical games in my boredom, like if the car that came down the street was silver, the next car would be his. Or if, when I went inside to check the time, if it was an odd number, he’d be here within five minutes. Sometimes he didn’t show, and when he did, we’d work one of his odd jobs or sit in his basement apartment, playing solitaire on his computer. The VA prescribed him morphine for the arthritis in his back. He said it helped the shooting pain in his shoulders, his forearms, but then the world would open up and hours disappeared.

The Orioles were only up by one, and the crowd in my section behind third base booed as Johnson walked the leadoff hitter. For the past twenty years, Orioles fans knew what it is to lose. The previous two seasons, Johnson led the league in saves, but to get a save means the game must be close, and it was hard as a fan to trust a small lead, especially when Johnson hadn’t looked the same this season. He never would return to that league-leading form, bouncing around from team to team with mixed success.

With one out, Johnson got a comebacker, but instead of a game-ending double play, he overthrew the second baseman and let that leadoff walk advance to third. A man behind me yelled, “You get paid to throw, you hack.” As Johnson caught the next game ball, the disappointment in his expression faded with a forced exhale, his shoulders rising a second before he reset into that familiar posture and looked in. I figured, maybe his stoic demeanor, here, was its own kind of superstition. Maybe his lack of any idiosyncrasy was what he needed.

The only thing that defines a superstition is the ritual of repetition, and sure, there’s nothing to prove it works, but who’s to say it doesn’t? That’s the catch—failure is easier when you can blame an individual misstep rather than confront the unknowable world itself.

My father had built up too strong a tolerance for his meds, so his doctor switched him to a time-release patch. But he had a bad reaction to it, spent two days stuck on his shower floor, unable to stand. Eventually, he crawled to his cellphone in the next room, then the ambulance, the ER. When I showed up, he was half-lucid, sharing stories with the man in the bed next to his—about Vietnam, about morphine. My dad talked about his back, the other man about his broken hippocampus, or thalamus. I wasn’t listening. I kept looking at the time on my phone and watching the movie playing on the TV above his bed.

The truth is, we had no plans to go to a game together. If he’d have died in that shower, I wouldn’t have known until he missed our ritual Thanksgiving lunch—the only time we saw each other, unless we couldn’t and rescheduled to Christmas, or my birthday, or his. I was another O’s fan that joined the bandwagon a couple seasons back, when they knocked the Yankees out of the playoffs a couple years back. But there was a steadiness to watching MASN with my roommates after work, to sitting in the nosebleeds on student ticket night, chanting Let’s Go O’s, punctuated with stomps. I got the tickets, last second from a friend, but had no one to go with.

Johnson gave up a double, and by the time he got his third out, the O’s were down by two. The crowd jeered him into the dugout. I watched him in profile, shaking his head, and I imagined him reliving each flexed muscle, trying to figure out what went wrong. When the game let out, I followed the line of disappointed fans clad in orange and black as they made their way toward Russell St. Even with the loss, it was a relief to be free of the dark and anti-septic smelling hospital room. The medication shortened my father’s memory—every time he woke from a nap, he greeted me with a fervor as if he hadn’t seen me in years. I couldn’t help but be reminded of all the times when that were true. As I scaled the metal stairs, the woman in front of me had a tattoo on her shoulder of eagle feathers, and around it, in fading black script, were the words, If you only knew.

David E. Yee is an Asian American writer whose work has appeared in American Short Fiction, AGNI Online, Seneca Review, Gulf Coast Online, and elsewhere. In 2017, he won the New Ohio Review Fiction Contest, judged by Colm Tóibín, as well as the Press 53 Flash Contest judged by Jeffrey Condran. He holds an MFA in fiction from the Ohio State University, where he was associate editor of The Journal. He’s a bartender in Columbus, Ohio.