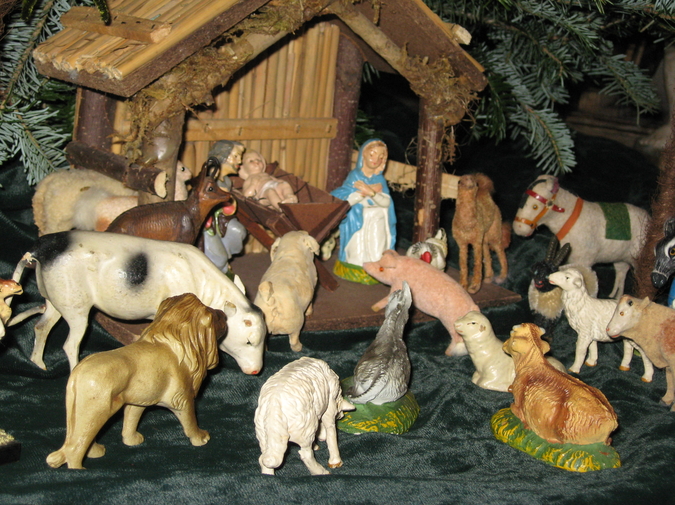 Across the street, I see a large, jolly-looking man with a white beard and white hair leaving the house of our neighbors, David and Shelby. It's mid-summer, but the man is wearing camouflage – the jacket, hat and hip waders of a duck hunter.

I grab my phone. I send a message to David: Santa Claus spends the off-season duck hunting?

David and I share an ongoing commentary on the comings and goings of the neighbors along our street. It is a commentary especially focused on each other’s households. Short observations and inappropriate asides, with brevity an unstated but agreed upon rule for the rhythm of the dialogue, the conversation carried on in the street as we cart trash cans to and from the curb, from the open window of a car as we only barely slow down, via emails we send from our computers, and, perhaps most effectively, via text message from our phones.

The Santa-looking hunter has gone back into David’s house. I see David leaning over his phone as he stands in his driveway, responding to my message: He had to put down one of the reindeer this morning.

I send back: I hope your daughter got to help.

I could do this all day. Comments on the comings and goings of our neighborhood, the speed with which we fire off the comment the key element of every exchange. Ideally, the text would have arrived on David’s phone even as he was still in conversation with the duck-hunting Santa, because the texts are best when he glances at the message while still engaged in whatever activity I’m commenting upon.

Such speed reinforces the invasiveness of the comment. The sense that there is no privacy on our block.

Sometimes, I’ll text sexually inappropriate comments to David while he’s in conversation with various neighbors. I’ll see him from my window, where he is on the sidewalk talking pleasantly about some or another development on the block, and I’ll interrupt him with the most grotesquely inappropriate thoughts or phrases.

David is one of those people who is unable to avoid a text, a fact which gives me a perverse sense of righteousness about the interaction, as I’ll tell myself I am teaching him a lesson about staying focused on the moment, about not being so easily distracted by the constant communications that he receives.

Yet because he will inevitably read any message he receives, I’m able to watch from my window as, mid-sentence, he casually pulls his phone from his pocket, reading my text as he continues to talk.

The first goal is to make him miss a word, fumble a line. Ultimately, I hope to make him physically stumble, even drop to the ground.

So far, I’ve barely made him flinch. Which only leads me to increase the intensity of the comments I make.

David is a highly educated transplant to this city, having followed an opportunity to work in investor relations at a medical device startup that was founded a few years ago. Most people on the street have absolutely no idea what the startup, let alone David, does. For a lot of people, in fact, there’s a certain amount of intimidation inherent in the words “medical device startup,” let alone “investor relations.”

When neighbors gather in the street in the spring and fall, sharing drinks or food as they avoid whatever yard work they’d originally ventured outside to tackle, people will sometimes ask what David does. “I’m sure I should know this,” someone will say, “but I just can’t keep track of what David does. Or what that company makes.”

“And a lot of animal testing,” I’ll say.

“Animal testing?” someone will ask.

“They don’t kill the animals do they?” someone else asks.

I’ll lift my shoulders, a slight grimace on my face. “Well,” I say, “only when that’s the most humane next step.”

The assembled neighbors are silent a moment. One shudders. Another turns and steers her young son away from the assembled group. “Go play on your bike,” she says.

“But David’s not part of this, is he?” someone asks, and the group turns its eyes to me.

I shrug again. Grimace again. “Not directly,” I offer, then reach down and gather up my yard tools. “I mean,” I say, turning to head back to my house, “not since he took that promotion.”

Part of the ongoing commentary with David means that, once I’ve gotten into the safety of my backyard, I’ll pull out my phone and text him.

Just explained to some of the neighbors that part of your job involves sewing shut the eyes of laboratory bunnies. Hope you don’t mind.

David travels as much as five days a week. But he’ll respond within seconds, no matter where he is.

No problem. Just don’t tell anyone about the pediatric trials we’re about to start in New Guinea.

My responses range from the awful to the truly disturbing.

Across the street now, the Santa-hunter has emerged from David’s house. He’s carrying a large shopping bag.

I start typing on my phone again: Is he taking back your presents?

David glances at the message as he’s talking to Santa. But his face does not change, no break whatsoever in his pleasant conversation with the bearded man.

I type again: Or are you regifting him that breadmaker we gave you?

He glances, but there is still no change.

When the man has driven away, David starts typing quickly, glancing toward my house, trying to get a glimpse of me.

I duck down, kneeling on the floor of my dining room. In a moment, I peek out at him through the slats in the shutters.

I have to remind myself that I’m a grown man, with a wife and children, a job and responsibilities and a mortgage on this home.

David is still scanning my house, looking for me, then stops, seeming to stare right at me behind the shutters. I fall to the floor, lying on my back.

His message comes through: Just giving Santa some reindeer meat. And a couple of frozen rabbits from the office.

And of course he has me, I realize now. I’m rendered mute, prone and motionless, able only to lie on my back and read his message once again.

It’s minutes later that I text him an acknowledgement of my defeat: I’m on the floor. In my dining room. A man of forty. It’s come to this.

He doesn’t respond. The winner never does. But as I lie here staring up at my ceiling, I know I’ll be back at him very soon.

Eric Barnes is the author of the novel Shimmer, an IndieNext Pick from Unbridled Books and has been a reporter, editor and publisher in Connecticut, New York and now Memphis. Years ago he drove a forklift in Tacoma, Washington, and then Kenai, Alaska, worked construction on Puget Sound, and froze fish in a warehouse outside Anchorage. He is now publisher of three newspapers covering business and politics in Memphis and Nashville. He has published more than 20 stories in a range of journals, including one that was selected for Best American Mystery Stories 2011.