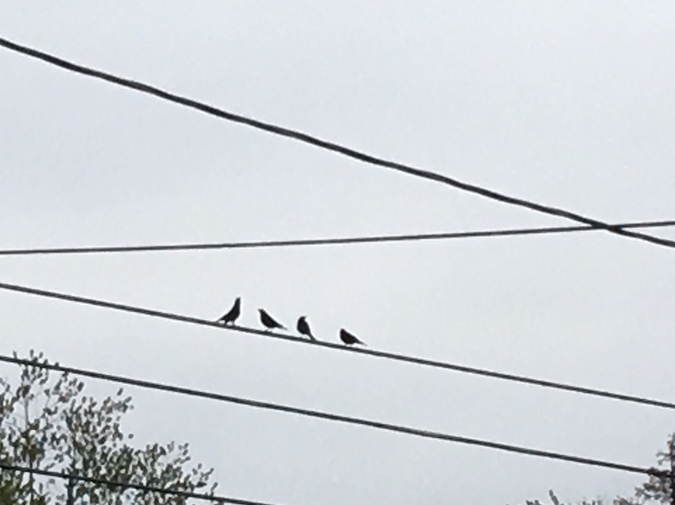 The man wearing a Ray Lewis jersey doesn’t know who Ray Lewis is. He dresses without thought, like a cartoon character who only owns one outfit. He walks the street for two blocks, turning east for a block-and-a-half, before heading home down an alley. He does this in loops on the hour, every hour, between seven am and four. He lives on the first floor of a shotgun house where the family above him screams. There are four of them up there: a mother and three sons, who park a grocery cart beneath the stairwell. The mother yells and wonders what kind of men her children are, how they’re so much like their daddy, and the man wearing a Ray Lewis jersey slinks back outside at four to take one last loop down the street.

In the evening, when the house is quiet, dozens of chimney swifts flood the sky. They flutter about like bats, scooping up insects until it’s dark, then shoot back down the chimney, their movements sharp, orderly, precise. It’s hard to imagine the insects stood any chance at all.

In the morning, the man wearing a Ray Lewis jersey sets out on his opening loop. He’s in no hurry to return, but he does, he always does. He turns at the same spot, behind a breakfast place that reeks of roasted beans, and slips between brick buildings covered with ivy and rusted fire escapes.

By noon, the sad house trembles. The mother wonders aloud what good her boys will be if they won’t man up, won’t act tough—if they won’t even work up the nerve to look at her.

Soon the chimney swifts will leave this place. They burrow into the house in April and nest throughout the summer. But in November, they head back down to the Amazon—to Columbia, Peru, Brazil—to exotic-sounding sections of exotic-sounding towns where they nestle for a time in someone else’s chimney. And when spring arrives, they repeat the cycle, returning to this shotgun house, which they must consider home.

When a door slams, the mother shouts, You got somewhere else to go, do you? I wonder how many times she’s asked this before. At least once to her husband, who left them one night in the dark. And to her daughter, whose things fit neatly, two summers ago, in the back of a girlfriend’s car. It’s the Do you? that feels like a concession, a plea for them to tell her of a place they all might go. Her boys say nothing as they leave and it’s this silence that kills her, this silence she cuts with those two sharp words, piercing the air to catch them.

Sometimes the man wearing the Ray Lewis jersey takes longer to come back home. If twenty minutes pass, I wonder if something happened—if he chose, for once, to sit in a park, or eat at the diner just up the street. But then he’s home, turning the key with that name on his back, identifying him as someone he is not, as someone he doesn’t even care to be.

On a Sunday morning, early in the fall, the oldest boy piles his things into a truck. His mother cries at the sight of him, and his brothers bow their heads like mourners gathered around a casket. Before he leaves, his mother asks him to promise her something. Promise me, she says and I think I know what the promise is, this promise he holds before her now, to do with what he pleases.

Matt Barrett holds an MFA in Fiction from the University of North Carolina at Greensboro, and his stories have appeared in SmokeLong Quarterly, River Teeth, the minnesota review, The Forge, The Journal of Compressed Creative Arts, and Wigleaf, among others. He lives in Pennsylvania with his wife and their two sons and teaches English at his undergraduate alma mater, Gettysburg College.