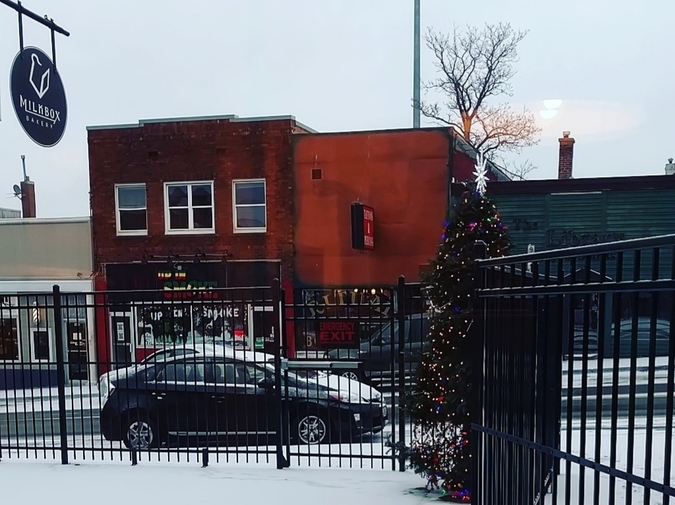 It’s 12 PM. The bakery’s completely dead. The snowfall’s been nonstop the last few days. The university let out for Christmas break, and there’s no one left in town. I’m wiping down countertops, washing dishes in the back, letting my hands sink into the scald and suds for warmth.

The backdoor bell clangs. I already know who it is. Mo comes in like a Minnesotian, thick wool gloves, handknitted maroon scarf, long flowing tobacco coloured coat that goes past her knees. She looks like she went AWOL from a Frank O’Hara poem, and she’d be glad to hear you say that. When she sees me she beams and says “AAAaaaannddrreeeesss!”, makes a nest of her stuff at the rustic wooden table.

I go into the back and grab a couple cinnamon knots from the day-olds. I pour us some coffee, sit at the table. She asks me how I’ve been. I tell her that’s a loaded question, so I ask her the same. She laughs and says, “fuck dude, saaame.” So we focus on books. I bring up Dostoevsky, she brings up Dumas. Room on Fire plays on repeat in the background.

There’s a lot of stories I can tell about her. She may not know it, but she’s been there for many important moments in my life. Like how she drove me to therapy literally minutes after I was fired from an old job, and I almost cried in her car, and she told me if I needed anything to let her know. Or how I’d sit at the bartop during her shift at the Octopus and distract the drunk Nietzche-spouting crumb-stached dude who kept coming in and telling her all about his girlfriend who went to Rome without him.

There are many stories, but in this moment at the bakery I’ll tell you a fact: she got me into the Strokes, she played them often when I came into the bakery way before I worked there, and way after she got me a job there in the first place. And in a way, it was the linchpin for everything that came after. Every act of healing and reflection.

So we’re listening to Room on Fire in the dust-covered bulbed lighting of this place, watching the snow fall. And oh god it’s wonderful sitting here, drinking too much coffee, eating too many pastries, and loving everything about this moment.

Drink of choice: any dark roast coffee with some bite to it, with a couple dashes of cinnamon.

Andrew Byrds is a writer based in Portland, OR who has had works appear in Maudlin House, Philosophical Idiot, PUBLIC POOL, Red Fez, Entropy, tl;dr magazine, and Trash Panda Poetry. They currently work as an editor for Entropy.