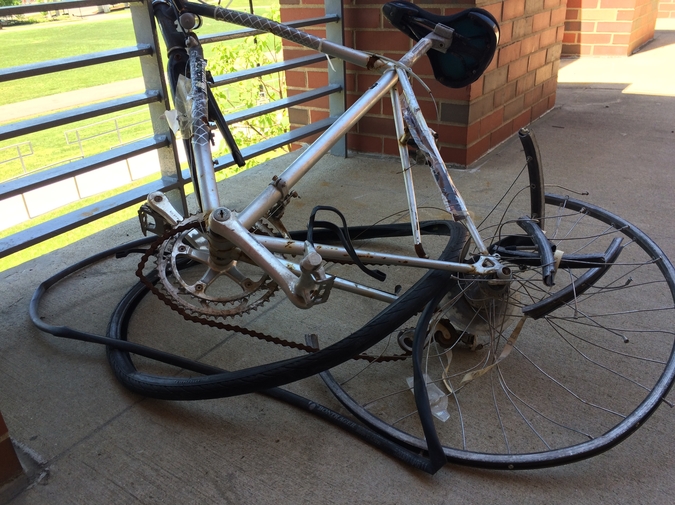 Tom has removed the splinters from his knuckles. He’s wrapped his hand in gauze. There’s a knock on his cubicle divider and he’s glad to see it’s only Gary from Accounts, a levelheaded, elder statesmen in the office.

“Hey young buck you got a second?” Gary asks.

“I liked your energy in there,” Gary says. “Your passion. You got middle-management written all over you. Just one thing.” He turns his head to the side and pulls back his tuft of salt and pepper hair, exposing a small silver circle behind his ear. It looks like one of the bolts Dr. Frankenstein put in his monster’s neck, though much smaller and better concealed. “I don’t know how long you’ll last unriveted,” says Gary.

Gary produces a business card and hands it over. “Talk to this guy,” he says. “He’ll explain better than I can.”

The card reads Leo Schwezeger, MD. The only other print is a phone number and the phrase If you have to ask...

“Your mood is mostly the product of chemicals in your brain,” Schwezeger explains. He sits reclined in his office chair, his hands interlaced behind his head, his feet atop his desk. The soles of his shoes are unblemished.  “Sometimes the balance of these chemicals is good,” he says. “Sometimes not so good. There’s an ideal balance for, say, playing basketball, but you wouldn’t want that same balance when reading poetry.” Schwezeger turns his head to the side and displays the small cylinder behind his ear as if it is a credential. “This little knob acts like a radio tuner, except instead of dialing in the perfect song for the situation, it’s the perfect balance of chemicals. Right now, for instance, my rivet is set to Friendly Chat.”

Tom thumbs through a brochure summarizing dozens of other ‘chemical settings’ accessible via the rivet: Relaxation, Focus, Constructive Confrontation. “And it turns off?” Tom asks.

“Yeah I guess,” Schwezeger says. “If you want.”

That night Tom goes to the ballet alone, a date night set up long ago with a girlfriend who as of recently wants nothing to do with him. Outside the theater he tunes his new rivet to Mingle and feels suddenly like a charged particle surrounded by a charged field, expanding, about to converge. A woman wearing a long, flowing shirt and tights walks past, a messenger bag on her shoulder. She seems to be carrying her own field of energy. Tom glides over.

“I was just admiring your messenger bag,” Tom says. “Though I believe it technically could be called a satchel.”

The woman smiles. Tom had sensed that she knew she carried a satchel, that she took pride in this specialized knowledge. Talk of satchels leads to other topics and she isn’t opposed to a free night at the ballet.

The curtain goes up and Tom tunes his rivet to Appreciation of Art and Beauty. The dancer on stage stands on one leg and twists his other three limbs into a stance that strikes Tom as essential. He feels a hole opening in his chest, an empty space the exact shape of the contorted dancer. He sheds a tear.

“You must really love ballet,” the woman turns to Tom and whispers. She lays a finger in the corner of Tom’s eye, soaking up his tear like a bee drinking pollen from a flower.

Tom wakes up the next morning in the woman’s apartment. Particles of dust dance in a beam of light shining through the curtains. He dresses quickly and goes to meet her in the living room, his rivet still tuned from last night to Casanova.

She’s seated on the love seat reading a magazine. Tom feels for his rivet–there is a frequency for Morning After, but he can’t remember which way it is on the dial. She pats the arm rest and Tom sits down next to her. They kiss. She runs her fingers through his hair, bumping the rivet, nudging it to a frequency Tom cannot identify.

“Easy there,” Tom says, pulling her hand away.

Tom tells her about Gary from Accounts, about how the rivet might be a real life changer, about Schwezeger and Mingle and Appreciation of Art and Beauty. His words are like water from a cup that’s been knocked over.

“So wait,” the woman says. “Is it you or the rivet that likes ballet?” Her eyes narrow. Her lips fold in at the corners.

Tom realizes he’s clinched his hand into a fist, aggravating the cuts underneath the gauze. He’d forgotten all about the cuts and the gauze but now he feels as he did when he’d incurred those injuries. The smile he’d been wearing won’t hold. His cheeks turn hot with confusion, anger, embarrassment–he’s not sure. The room blurs and in the center of his smudged vision there is the woman, off the love seat and slowly stepping away.

Ryan Krull teaches at the University of Missouri–St. Louis and is a reader for Boulevard magazine.