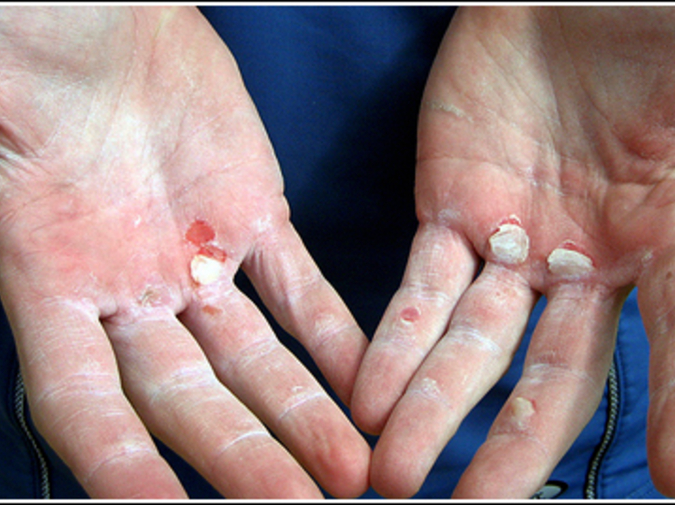 On the way home, Jill pulls through Dairy Queen and orders a burger and a butterscotch sundae. Her boyfriend orders the same thing, three large fries and a dilly bar. They eat while Jill drives, without talking, listening to classical music on NPR. Without asking, her boyfriend eats half her hamburger and some of her sundae. When they pull up to his apartment, he kisses her on the cheek and gets out of the car.

"You wanna join?" the guy behind the counter asks.

"Five bucks a visit," he says. His body is ripped, muscles carefully molded onto other muscles so that it'd probably take an hour to dig through all the mess and find his bones and organs.

He shakes his head. "Five dollars a visit or you can buy a three month membership for $185.00."

She gives him a wadded up five dollar bill, one so torn and dingy-looking that she's sure it came from a hooker with chlamydia or gonorrhea.

Buff, tan people with iPods and brightly colored running shoes come in and out of the gym all day. Most of them stare at her for a few seconds and she knows they are recognizing her from places like Burger King and Pizza Hut. These are their secret places and they're uncomfortable seeing her, thinking that she'll somehow reveal them as an unfit, indulgent group of people.

Jill drops onto the toilet, pulls her pajamas down and pisses hard and fast. She imagines her stream of piss drowning a colony of ants, all of them screaming and struggling for help, being blasted in the face by her warm clear jets. She imagines the ants are actually people from the gym, who have worked out so much that their bodies have shrunken to this near nothing-size.

She flushes, pulls her pants up and leaves the bathroom without washing her hands.

She lifts and lifts until she can actually feel the tendons in her arms ripping. Ripping away from the bone and ripping apart from each other. The fabric of her muscle is twisting apart, unraveling like yarn. The only thing holding her muscles in place is her slimy slick skin, soaked with sweat.

After a while, she drops the bar, and the weights bounce off and slide across the floor. She rolls off the bench and curls into a fetal position, concentrating on holding her skin in place, so her muscles won't spill like wet spaghetti onto the cool linoleum.

The clock ticks and she can feel its vibration loosening her skin. She feels it nearly splitting around the creases in her arms and the bends in her legs. She lies motionless, urging her heart to quit beating, to quit shaking her body. She stops breathing, so her abdomen won't have to expand to accommodate all the air being pumped into her lungs.

"If I can just hold on," she thinks. "If I can just not move until my muscles have time to solidify. If I can just be perfectly still so I don't spill every bit of me onto the floor."

She lays that way, not breathing, heart not beating, hoping no one will notice her. If she lays there until morning, she wonders if they'll make her pay the $185.00 membership fee.

Brandi Wells has a BA in Writing and Linguistics and sometimes blogs at www.brandiwells.blogspot.com