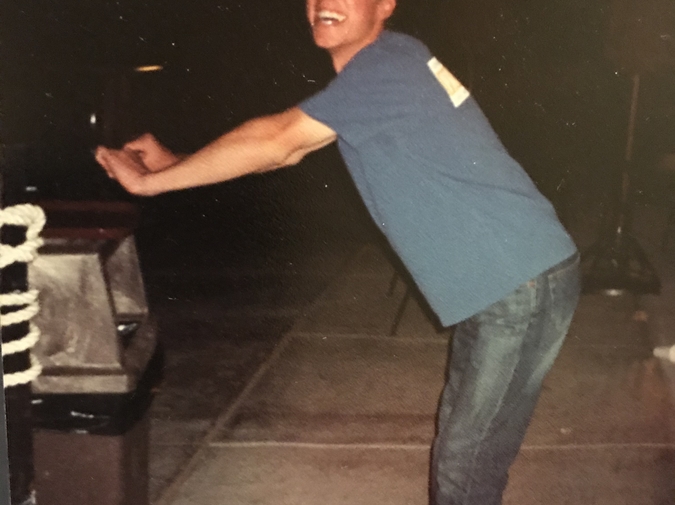 The story of how I lost my virginity for the second time begins like a bawdy fairytale about a drooping, uncircumcised beanstalk. Just make the Jack in this story a thirty-year-old gay man named Greg. Instead of magic beans, put a crushed four-pack of Viagra in his hands that arrives not via witch but via USPS with a greeting card from a widowed mother. Thought you boys would have fun with these. I can’t use them. Ha!

The boy Mom was talking about was my boyfriend of three years, Lucas, a seventh-grade English and civics teacher I would one day marry on a farm in east Austin, Texas, near where we live. I hope it doesn’t embarrass him too much to say that, despite my lifelong erectile dysfunction, likely the result of spastic cerebral palsy, we already had a vibrant sex life, though with limitations.

Like learning to ride a bike without training wheels, I had long ago given up on the idea that I might top, thinking it was just something I couldn’t do. Maintaining an erection can be tricky for me.

Medical professionals are careful to point out that cerebral palsy itself doesn’t inhibit sexual desire or function, though studies show that most young adults with CP report physical problems related to sexual contact.

If only someone had bothered to tell me this. You’re not doomed to a life of flaccidity when it matters most. It will just take more work for you than for others. A little sex education would have gone a long way, and not just for me but for the general population.

I grew up in Utah, a state whose official policy when it comes to sex is for teenagers to not have any, ever. Abstinence only. Keep zippers zipped and buttons buttoned, I remember my eighth-grade health teacher telling us in her raspy voice. Stay vertical!

For a number of years in her teens and twenties, my older sister snowboarded professionally. Her best friend was a snowboarder, too, and a bit of a partier. The friend had grown up Mormon but had fallen away from The Church. Her bishop told her that if she wanted to become a virgin again, and re-enter the faith’s good graces, she’d have to take it up the butt, and only up the butt, for five years.

My family was non-Mormon, a rarity on our block, and as such we made a point of finding stuff like this hilarious rather than horrifying. From the moment my sister’s friend relayed her bishop’s edict in our kitchen to my mom and sister, it became one of those stories we trotted out anytime we wanted to get a laugh or really impress an out-of-state friend.

Salt Lake had not been an especially cruel place to grow up, but it wasn’t an especially enlightened place, either. Kids used the word gay in the same way they used the word retarded—to signify something they didn’t like. The fact that I was closeted and secretly retarded or brain damaged or whatever you wanted to call it made me feel, to use the religious vernacular of The Church, dirty and unworthy. I burned holes through the toes of all my right shoes from dragging my foot and if it had been a long day with lots of walking, my sock would have a hole in it too and the side of my big toe would ache. I hated myself on those days, seeing my perfect tennis shoes destroyed, my bruised big toe.

Still, my cerebral palsy is pretty mild, and after hamstring-lengthening surgeries in my teens, I spent more time stretching on the tennis court than I did at physical therapy. My right leg is half an inch shorter than my left and smaller in circumference around the calf. My balance royally blows. I can just barely point my toes on my uncoordinated right side, but I hiked and swam and played tennis.

If I passed as almost able-bodied out in the world, it was a different story in the sack. I came out over spring break of my freshman year of college and entered into a perilous dating scene—perilous because the boys at school were faster and bitchier than I was. This is a crude generalization, of course, one with many sweetheart exceptions, compounded by my own ignorance and insecurity about my body.

None of this kept me from having sex. It’s just that it wasn’t always satisfying. Some of my sexual milestones seem downright sad in retrospect. When I lost my virginity my sophomore year of college, I told the guy not to worry that I wasn’t hard; I had “accidentally” masturbated while he was on his way to my dorm room.

If taking it up the butt meant you still had your v-card, I was a card-carrying member, and probably would be for life.

In my twenties, I learned to give pleasure with my tongue, teeth and fingers and, to a lesser extent, by bottoming. Long, painful experience taught me to keep my jeans on during make-out sessions and to put off sex for as long as possible under the guise of taking things slow. Whether or not I was enjoying myself didn’t matter. The important thing was that I wouldn’t die a full-on virgin, that I found people willing to be with me, if only for a time or two.

The problem was that most guys I was with eventually wanted to bottom, too, and when I couldn’t deliver they would drift away. They never told me my lack of tumescence was the reason things didn’t work out between us—but of course they didn’t. They weren’t monsters. They were just a bunch of disappointed buttholes.

I always told myself that if I didn’t have tight tendons I’d have no problem getting any guy I wanted. It turned out I just needed one.

I met Lucas in 2011 while I was in graduate school at UT-Austin. Lucas claims he didn’t even notice my limp until I brought it up on our second date. “Wait, you limp?” he said, genuinely confused. I found his absentmindedness endearing enough to ask him to take the next step with me: I invited him over to kill a cockroach I had trapped under a mason jar in my living room. (This is Texas we’re talking about, after all. Cockroaches run the place.) We ended up making out on the couch. He told me years later he’d noticed I was unaroused but took it as a challenge to be a better kisser.

After a few more dates, when I invited Lucas upstairs, I melodramatically confessed I could never top him. “I didn’t realize we were having sex this instant,” he quipped. He stuck around for date after date. I started to relax. The idea that sex could be a beginning and not an ending was new to me.

Turns out a life of one-night stands and flings was the opposite of what I needed. What had been wrong wasn’t just physical. It was also psychological. It took the patience and trust of a long-term partner, experimenting with different positions, to figure out what put the least strain on my legs, and my ego. In high school, I’d had my orthopedic surgeon excuse me from gym, so even being naked around another guy, letting him see my surgical scars and asymmetry, took some getting used to. My performance improved slowly, with my pleasure. I tried to top and failed, but I was free to fail.

Sex is more delicious and complicated than being a top or bottom, a pitcher or a catcher, and I learned to enjoy playing ball, even if I couldn’t compete at every position. At the same time, I’m a guy. I suspected that if I could top, even just once, I could stop worrying about it.

This is where my mom’s Viagra comes in. It didn’t arrive out of the blue, exactly. Knowing she was taking a trip to Costa Rica, I’d hinted more than a few times that she should visit a local pharmacy, one that didn’t require a prescription, and hook me up. She’d deflected and demurred and “lost” the Viagra for a while in her jumbled medicine cabinet. Now here it was, months later, a belated souvenir with the price sticker still on the box. She had shelled out 22,500 colónes, or about forty dollars, for four powder-blue, fifty-milligram pills, each shaped like a diamond. I put the box on the alarm clock on the nightstand and waited for the right time.

One day that spring, Lucas and I went to a Renaissance festival about an hour outside of town. It was one of those days when you feel dumb with love and vitamin D. We gnawed turkey legs, sipped mead, threw knives and put on chainmail—a feat for Lucas considering how ticklish he is. When we got home, without saying anything, I punched out one of the boner pills and swallowed it down with an unromantic slurp of La Croix. I figured it was a day for trying new things. It had been a decade since I’d lost my virginity the first time—enough taking it up the butt to be re-virginated twice, according to my sister’s friend’s bishop—and here I was, trying to lose it all over again, this time with nothing to hide.

Taking off his glasses, Lucas squinted at the long-past expiration date on the box: Nov. 2009. Five years ago. “Where’d your mom get these again?” he asked.

“Who cares, too late,” I said. I stripped off my clothes and lay atop the comforter, like I was about to be sucked into a UFO.

Seconds passed, then minutes. I felt my heartbeat in my extremities and saw myself rise like a slowly inflating air dancer at a car dealership. We giddily propped a pillow under my rear and scrolled to a Dave Matthews playlist. Lucas climbed on top. It took about an hour of trying. Then it was all me. I lasted about thirty halting, exhilarating seconds.

It wasn’t perfect. The first time never is.

Greg Marshall is a 2020 National Endowment for the Arts Fellow in Prose. A graduate of the Michener Center for Writers, his work has been collected in The Best American Essays and recognized as Notable in the anthology three times. He has received fellowships from the MacDowell Colony and the Corporation of Yaddo. His essays have appeared in Fourth Genre, Foglifter and Green Mountains Review, among other publications. Marshall is at work on a memoir, Leg: The Story of a Limb and the Boy Who Grew from It. He lives in Austin, Texas with his husband. Find him on Twitter @gregrmarshall.