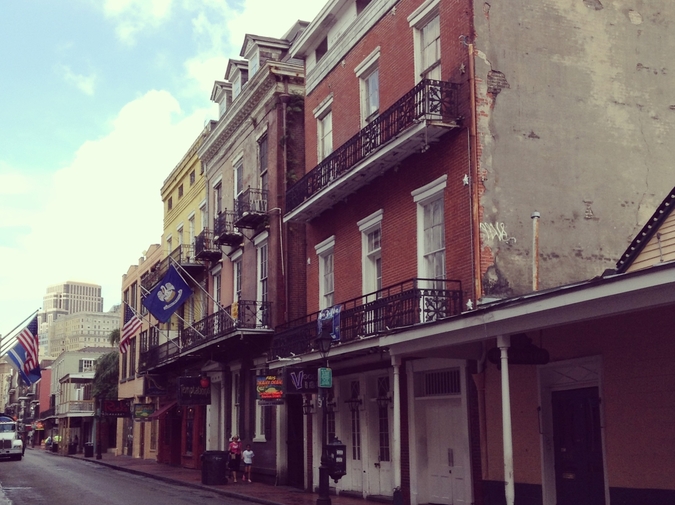 On the street, the music thundered from an unseen source, day and night – but it was, oddly, only audible from the sidewalk. Once ensconced inside our house, we forgot about it, as we neglected so many external things during medical school. Consumed with etching facts and symptoms onto our fevered brains, we knew that what we were learning could, one day, mean the difference between life and death. Or at the very least, we knew that we yet lacked the expertise to confidently say that it wouldn’t.

The music was always classical: horns, strings, thundering timpani, laughably incongruous with our shoddy, “up-and-coming” block. Its presence seemed to be an oversight; then a joke; and then, maybe, a statement. We noticed it first independently and then together, and then after the third day we thought we had pinpointed its source. The third story window of a house down the street from our own: the stifling abode of a nonagenarian who a summer ago had enticed us inside through the window, regaling us with phlegmy tales of his time in the merchant marines until we, melting, felt we’d stayed long enough to be polite. We had beaten a hasty retreat from the stagnant living room, laughed about it when we got home. We made a habit of greeting him through the window after that, and when we saw him together we would wonder about how safe he could possibly be, living at home alone. More than once we thought about asking him whether he had family, or support, or whether anyone came to check on him, but somehow we never quite did; and when winter came and the windows were shut and our own lives were more pressing we forgot to wonder about him.

In the liminal space between being trainees and full-fledged medical practitioners, we were still working out the details of what we owed to whom, and when; and how, if at all, those obligations changed when we left the confines of the hospital. We were sure that we now owed more, as a general rule. Late at night on our rooftop, when we heard the horrible crash of a car accident below, we’d instantly made the unspoken decision to sprint down our rickety steps and out to the pavement, offering our services, such as they were. But afterward I wondered whether we’d really rushed outside to help, or to somehow prove ourselves: was that adrenaline that pushed us out the door responding to true need, or to the drama of the moment, a year too early to be truly useful?

Sometimes the music was beautiful, a single flute accompanying delicate piano, and we found ourselves standing a bit longer outside, waiting the extra second to drive away. It was an unseen hand, tethering us to something ethereal but somehow concrete.

We wrapped ourselves in explanations but harbored secret nagging unease. He lived alone: the music was probably loud because he couldn’t hear well; it was probably on all night because he had told us he slept poorly. It was probably coming from the third story window of his row home because, maybe, improbably, impossibly, he had climbed the stairs. When a week had gone by, we glanced at each other every time we walked outside, each daring the other to state the morbid obvious. I don’t think either of us really considered knocking on the door. What did he mean to us, really? The music surged in an accusatory crescendo.

Eventually we called the police – you called; it was your turn. I had called earlier in the year when the next-door-neighbors’ nightly rows had suddenly turned to thumps and crashes. I sat outside, where the flashing lights reflected off of the neighbors’ closed windows and a ladder reached the top floor. The music finally ceased; then, as I watched, a fireman stomped down the front steps, then another, and another. I pressed my hand to my mouth, waiting for them to carry out the body, his body. I needed to see it. To atone, maybe, or to believe. From the discomfort of the front stoop I imagined the putrefaction they would encounter due to our negligence; the position the body would be in. How long had he been dead? Had he been surprised? Had he – this was more difficult – tried to call for help?

But there was to be no shroud, no procession. The firemen made to leave, no stretcher in sight. “Did he pass away?” I called out. “The guy in 19?”

One of the firemen turned around. “Yeah,” he said, taking off his yellow hat. “He died six months ago. House has been empty since then.”

You had joined me on the stoop, complicit. “Who turned on the music?”

The fireman had already started back to the truck. “Ghosts, maybe,” he said without turning. “Squatters. Not my job.”

The metallic slam of the truck door; the growl of the engine; the quiet guilt; the silence.

Alessandra Colaianni, MD is a resident physician in otolaryngology-head and neck surgery at the Massachusetts Eye and Ear Infirmary in Boston. Her essays have appeared in Pulse--voices from the heart of medicine, Annals of Internal Medicine, and the Journal of General Internal Medicine. Follow her on instagram @cocacolaianni.