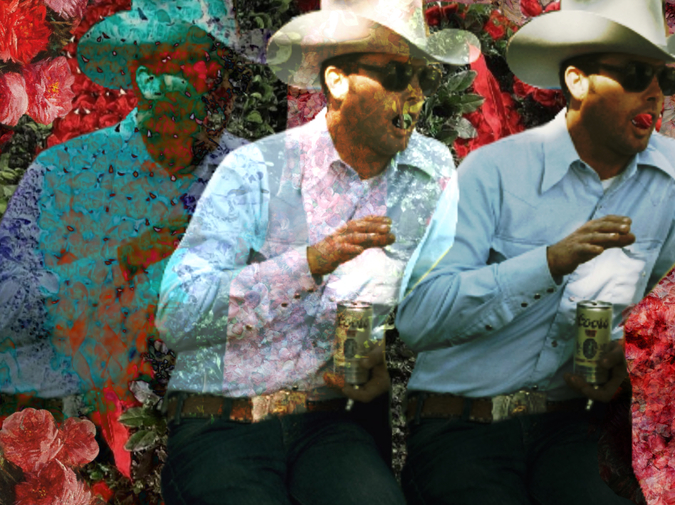 I suppose I was in a conspiratorial mood when I told you that I don’t always feel like a man. You reminded me that it’s a little preposterous to feel like anything at all. You wore a corduroy blazer because you feel good in a corduroy blazer. I wore a t-shirt because it was finally getting warm in the city again. Perched up in my chair, my body felt narrow and long. I imagined myself as the hieroglyph of a bird. We asked Joe how drunk he was. He said he was “a seven” before passing out on the table at the bar that night. I was thinking about how so much of friendship amounts to killing time. How we played cards until it got too late or we drank too much. How you noticed the goosebumps on my arms. How it’s not really that warm in the city yet. How we had been friends for two-hundred-and-fifty days. How I was drunk and joking about trying on your dresses. How I’ve never seen you in a dress.

We drove to Milwaukee on a whim. I hadn’t left Chicago in months. You were in the backseat with Michaela and I was in the front seat with Emily. It was autumn. We had been friends for four-hundred days. I got lonely for all the wrong reasons. From the backseat, you kept joking about moving to Milwaukee and getting a dog. I kept asking Emily about the ethics of horseracing. Her answer never changed: some horses just love to run. She told me about Secretariat. She told me about the descendants of Secretariat, many of whom share their progenitor’s apparent love of running. I find out later that Secretariat had six-hundred-and-sixty-three known foals. None of them were faster than Secretariat.

We stopped for gas somewhere near Kenosha. I got Pringles. I thought about salt. I shared Pringles with you on the condition that you take two at a time and put them between your lips like a duck bill before eating them. As we burned through the Pringles can, we abandoned this premise.

When Secretariat died, a veterinarian found that his heart was over twice as large as the average horse heart. I asked Emily if they perform autopsies on all racehorses or just on the especially successful ones. Emily didn’t know. I played with your hair clip until you pulled it out of my hand, delivering a short lecture on planned obsolescence. Still an hour out from Milwaukee, we agreed to play a game of Real American Racehorse.

Like what I suspect is a sizable number of human leisure activities, Real American Racehorse was invented in a bar. You confessed to me once that you were “absolutely sliced” when you devised the game’s rules. The Kentucky Derby was playing on a television mounted in the corner. Your first two real American racehorses were named Tacitus and Maximum Security. You named the first fake American racehorse “Cornflour.” You chose the name “Cornflour” because the bar you were in had this vaguely Cajun-general-store aesthetic and one of the shelves featured a decorative burlap sack labeled “CORNFLOUR.” You won the first round of Real American Racehorse. The game, little more than an elaboration on “two truths and a lie,” had its genesis.

From the backseat of Emily’s Honda, you began with the obligatory incantation: “From the year of our Lord, 1950. Three American racehorses: two true, one false.” The names of your three horses were “Lemon Drop Duke,” “Trumpet King,” and “Mr. Trouble.” I tried to read your face in the rearview mirror. Did your eyes pan slightly to the right as you named “Lemon Drop Duke?” Did you pause a second too long before naming “Mr. Trouble?” You made no attempt to remain impassive. Your eyebrows raised dramatically. You watched me watching you. You became, in the stables of Real American Racehorse, an expert in concealment.

I lied earlier. I have seen you in a dress exactly once, albeit only in a photograph. In the photo, you’re being asked to prom by a high school boyfriend. You’re standing in the parking lot of a strip mall. The signs of the various businesses are all lit up and indistinct. Your boyfriend is all gawkiness and irony and teeth. He’s holding a bucket of fried chicken from which a few wildflowers are protruding. “That dress,” you told me, “was an orchestra uniform. It made me look like a defendant in the Salem witch trials.”

Patterned in a floral print and several sizes too small, I remember wearing one of your shirts while we drank the cheapest beer at an expensive bar. I had just flown back from Massachusetts or you had just driven back from Ohio. We had been friends for four-hundred-and-eighty-nine days. You were telling me about narrative theory. I was telling you that there are always five-hundred-and-fifty-four roses in the ceremonial blanket draped over Kentucky Derby winners. “What works about Real American Racehorse,” I told you, “is that you have to be able to understand your opponent both strategically and creatively.”

“What doesn’t work about the game,” you told me, “is that it gets harder and harder to fool someone the better that you know them.”

I drank cheap beer. I wondered if you had it backward.

Two canned coffees on a bench in spring. We had been friends for two-hundred-and-two days. I was telling you about a movie I had seen years ago or you were telling me why you don’t like hearing your name spoken aloud. I was telling you about my hypertension or you were telling me about getting in a fight with your mom over buying clothes from the men’s section. I was lying to you about having finished Infinite Jest or you were lying to me about where you’ll be living next year. Birds overtook the trees around us. I worried, for a moment, if friendship is little more than the same coffee and the same five or six conversations on a loop. On the walk back to your place, I remember keeping my hands in my pockets.

A daylight-saving dark flooded downtown Milwaukee by five p.m. We made our way down to the river. I’d like to say that I saw us reflected in the water, but instead I wore your scarf wrapped around my head and tried not to look down at my arms. A lone duck was bobbing in the river, picking at a cigarette butt which passed his way. I joked to you that “I didn’t think we’d get to meet the mayor of Milwaukee tonight.” From this point onward, we’d compare all other ducks to this one duck and find them wanting.

In the slow humidity of missing you, I finally visit the bar where Real American Racehorse was invented. I sit where I imagine you might have sat and I order a drink that you would have ordered. I study the shelf where you must have seen that burlap sack labeled “CORNFLOUR” and found the name of the first fake American racehorse. The burlap sack is gone. Now the shelf is decorated with a few kitschy wooden crates. One of the crates is labeled “Parkesdale Pickles.” A decent name, I think, for a fake racehorse. Another crate is overflowing with orange boxes of rifle ammunition and shotgun shells. I order fried chicken. I think about salt.

Two sangrias later and eager to tabulate the strengths and shortcomings of our game, I crunch the numbers on a legal pad. I count up the two-thousand-and-twenty-four true racehorses who have participated in the one-hundred-and-forty-five-year history of the Kentucky Derby. In the current iteration of the game, two players can run through a maximum of five-hundred-and-six rounds with no repetitions of horses. If a hypothetical player happens to be knowledgeable about racehorses, or if more hypothetical players are added to the game, this pool of true horses is decreased in a predictable sequence: three players will produce approximately three-hundred-and-thirty-seven rounds, four will have two-hundred-and-fifty-three, and so on. This is not to say that the game is cheapened or endangered by foreknowledge or by additional players—only that the game is haunted by a certain cloying exhaustion which even the introduction of racehorses from the Preakness or Belmont Stakes can’t hope to dispel. The fake horses are the only unlimited variable.

Four identical and extraordinarily loud blonde women are sitting at the other end of the bar. They gradually become louder and more identical. As I draw up little vertices and topological trees for Real American Racehorse outcomes, the four women keep collapsing into identical gales of laughter. They must be good friends. I like imagining that they’ve been good friends for a long time. I especially like imagining that they all started out as very different people. Over years of friendship, they became so similar so slowly that none of them even noticed. Now everyone saw them as identical and the only ones who could tell them apart were each other.

I feel like I’m telling a joke out of order.

On the drive back from Milwaukee, we pulled off at a truck stop. You bought a pair of socks which declared your allegiance to the city of Chicago. You considered buying a pack of cigarettes. We both knew that if you allowed yourself to buy cigarettes in our neighborhood, you’d start smoking in earnest. I bought a small slushy while you and Michaela shared some private joke in the corner. Standing in the cold fluorescents of the truck stop, I realized that I didn’t know the name of the river which bifurcates Milwaukee.

How Michaela fell asleep with her forehead against the window. How Emily’s Honda was on the precipice of a one-hundred-thousand-mile anniversary. How I couldn’t hear you from the backseat. How horses loving to run and being run for sport aren’t really the same thing. How we missed the exit three times, then four. How the traffic into the city became a muddy circuit of taillights. How I couldn’t help but to cycle through the names of horses already learned: Foolish Pleasure, Defender of Nations, Genuine Risk; Palace Malice, Hoop Jr., Hot Lunch; Restless Jet, Roman Brother, Long Sherman; Goods Receiver, Corporate Report, Pyramid Peak; Kinnikinic, Sanhedrin, Homeboykris; Mercator Projection, Cryptoclearance, Joe Cotton; Secretariat, Abstinence, The Deputy; Imbecile, I’ll Have Another, Regret.

Leon Hedstrom is a reviewer and musician living in Chicago. He cooks. He drinks. He works on a detective novel.