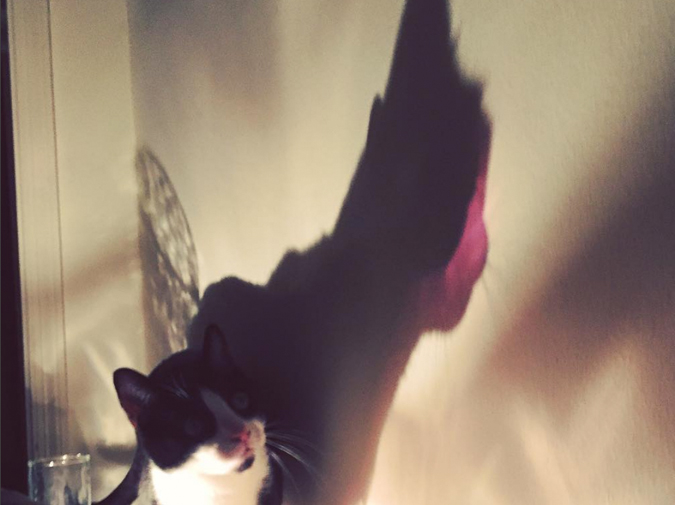 I descend my front steps for my daily walk, early morning, looking left and right to see if anyone is within eyeshot. I set out on the shadiest route, soon noticing a couple working in their flowerbeds, she in the front bed, he in the side bed, both wearing hats, both with their heads lowered. I tread lightly, eyes straight ahead. Past them, I turn at the corner where a line of trees blocks the sun. I breathe in warm air, beginning to sweat. A helicopter overhead, noise of motor and whirling blades, and as it disappears I become aware of footsteps behind me, somewhat distant, where did they come from? I make a turn to evade the footsteps but before long I hear them. I look over my shoulder, get an image, about my size and age, like me wearing a T-shirt and shorts, ballcap, pace slightly faster than mine. Don’t stare at him, already too long, take the next left, pick up my pace, don’t seem to be making a getaway.

Around the corner a woman pops out her front door for her newspaper. She smiles and waves at me. I return her smile, mine more faint than hers, and I see her catching sight of something or someone behind me. The man is still on my tail then, or is that overstating? I’m two houses past her when I hear her greet my shadow and address him by his first name, the same first name as mine, and before I can get a grip on the impulse I turn and take a peek at them as they chat. I decide to sit on a bench I see coming up and let my namesake pass me by, hope he doesn’t sit down beside me, introduce himself and share personal information and joke that he hopes I don’t think I’m being followed. Stick to the plan, take a seat, settle my mind. Dried bird poop on the bench, and I raise my leg, brush it off with my shoe and sit, paying no overt attention to the other walker, who may feel inclined to acknowledge me due to our creeping familiarity.

After an interval in which I hear and see nothing of him I stand and continue, seeing him some distance ahead in a spot of glare. I happen to be watching as he glances back, probably wondering if I’m there. Should I reverse direction and be rid of his image and aura of encroachment? Am I seeking some perverse revenge for his imagined pursuit? I take a quick turn, abandoning him but asking myself how likely it is that we’d have the same first name and if he spells it the same way I do. Does he start it with a G or a J?

Another helicopter spins its rotor blades above me, and I crane my neck up. Are the helicopters on their way to the same place, are they on the lookout for something or someone, are men with walkie talkies speaking inside their cockpits? Turn off the thinking, I’ll be better off, stride, glide, breathe. But why did a follower with the same first name appear behind me and make the same turns I did and why did we pass the home of the woman retrieving her newspaper at almost exactly the same time and why did she know him when I’d never seen him before and why did two helicopters fly over my head this morning when typically no helicopters fly over my head, though they do sometimes fly over the neighborhood, and why should I feel compelled to convince myself that none of these occurrences have anything to do with the other when I can make no sense of them as random events? Should my failure to construct an underlying narrative lead me to conclude there is none or should it lead me to persist in seeking connections? Why not try to forget about it? What could possibly be lost by stepping away from my walk’s surrounding events or nonevents and into the next stage of my day, an inevitable vigilance lingering but nothing approaching a determination to find out what it all adds up to when there probably is no hidden pattern to be uncovered. Home soon, don’t look for conflict or explanations, distance my questions, try to suppress the momentum of my mind.

Movement to my right before the turn to my house, and there he is again. How has he found his way back to me? He turns where I do, my street, is it too possessive to think of it as my street, does he know where I live, is he trying to bother me, can this be another coincidence, do I intend to walk up to him and introduce myself, look into his eyes and ask if there’s anything I can do for him, does he require some information that I alone can provide? I do not approach him. I mount my steps, reach into my pocket for my key, half expecting to hear his voice, a comment, a question, a farewell. Nothing is said, and I enter, shut the door, turn the bolt-lock tab and shoot him the finger.

I go to a window, peer out. Do I imagine I’ll see him returning, walking up my steps as if imitating my return? I see him on the sidewalk, eyes up, feet on my steps. What could he be about to say or do? The knock comes, I’m at the door, hesitant to open it but he’s seen me enter, though I could have gone directly to the toilet, give him a chance to leave. The knock comes again. Do I fear opening up? Why would I? I open the door, immediate eye contact.

Was there a problem earlier? he asks, sticking his face out at me.

Was there? I ask.

The way you looked at me I thought there could be, he answers.

What kind of problem? I ask.

If there’s no problem there’s no reason for either of us to make one. You looked at me and I thought I sensed an attitude, like no one should be walking anywhere near you. Do you have a problem with me? Is there something you have to say?

I don’t have to say anything, I answer, annoyed.

I didn’t mean to intrude, he says. I’m just taking a walk.

I suppose that covers it, I say, annoyance still coming through.

Does it? he asks. I doubt if it does.

I’ll get going then, he says, starting down the steps.

Close the door, relieved he’s out of my sight. Who is this person trying to make me the bad guy? If he returns he can stand there and knock till his hand falls off, and if I see him again he’ll see more attitude rising out of me. Does he expect me to forgive his trespasses when I don’t know him? Why would I do that? I need to get out earlier, while it’s dark, less heat, less visibility, less foot traffic, less competition for air.

I hear voices outside, move to the window, walkers, a couple on the opposite sidewalk and not far behind the couple I see him. They pay no attention to him and he pays no attention to the couple. He’s looking at my house, a troubled look. He appears to be asking himself a question, or more than one. Is he on his way home? Should I open the door, confront him, agitate myself with this stranger? What’s talking back to him in his mind, what would he say to me? I’d rather not know.