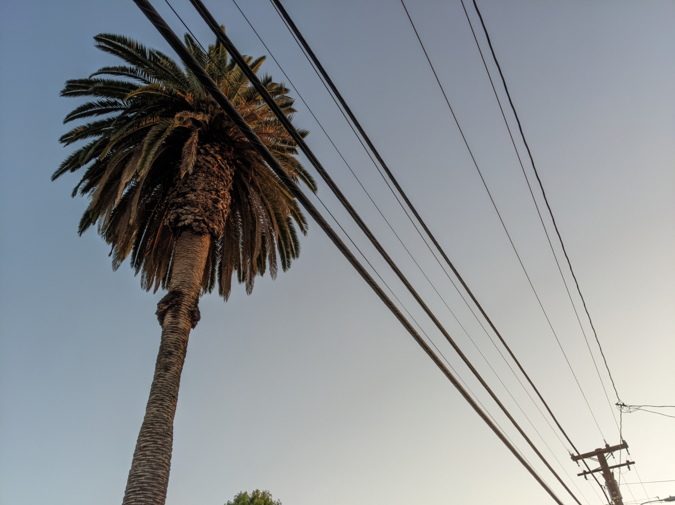 The couch cushions do buckle but only so far—clearly the way Malcom and Phil lean against this new hire has nothing to do with the pull of gravity. Law & Order: Special Victims Unit— second only to Monday Night Raw— started two minutes ago, and neither has paid the cold open any mind. Not the gloved hand sliding a key into an apartment’s lock, or the ski-masked assailant, or the close up of a cell phone buzzing an unknown number across a slab of granite countertop…none of it.

Instead, the new hire’s slender fingers guide them along a recent trip to Costa Rica, through pictures of what I imagine to be the usual—the sandy beaches and plates of fish casado, the tongue-out discotheque bathroom selfies, the Downward Facing Dog on a yoga mat in an open-air room draped with billowing curtains—as their cheeks burn and their bodies twitch with the yearning of too many bottled up years, already primed to cross an explosive threshold via no more than a light jostle of thigh on thigh.

So much so, I fear for their hearts, the unimpeded flow of blood to their brains.

How could anyone be so oblivious?

How could anyone think their lives deserved such oohs and aahs?

Yet Malcolm and Phil only nuzzle deeper into her, with a familiarity she clearly mistakes for a symptom of their disabilities, their reason for living in such a place as Lexington Home.

But they know better, so much better, especially Malcolm—who delivered mail for the postal service for twenty years. Who has a retirement, a pension. Who usually predicts the pervert who committed the crime before I can; he takes the bus to bowling Friday nights.

“To the sweet life!” Phil says.

I cannot watch anymore. “Can I please talk to you in the med-room?”

The new hire does not look up from Costa Rica; no one does.

“It’s just over here.” I stand up from my threadbare love seat and jingle the keys at her, and keep jingling them at her until she looks up at me, until she can understand that I am in charge of the keys, the opener of locks, the imposer here at Lexington Home.

With a sigh, she peels herself off the couch, strides after me on swordlike legs that make me wish she had not worn those yoga pants, that pink spaghetti strap—because for Malcolm and Phil, the context of SVU’s cold open is now forever lost. The thrill of any twist or turn in tonight’s episode completely moot. Their innocent happiness sucked.

The keys steady me, somewhat—the way their coolness presses into my hand as I open the med-room. The way their order will never change: blue will always open the dead bolt on the front door, yellow the narcotics box, orange the med-room.

When I slide the orange in, there is no doubt. “You can come inside.”

But the new hire scrunches her sun-kissed nose at this—at me and my crush of wooden cabinets and waist-high countertops, my meticulous charts taped to the walls, my Nasoflow Neti pots and IV bags of saline, my enema kits, my bins stuffed with thin blister packs, my clip boards, my permanent marker hanging from a string from a screw, the round of pretzel rods I like to munch after everyone has gone to bed, at the Black Ice air freshener I hung to stave off the must, at the small Goodwill lamp that tinges everything with a greenish orange light… this room where I spend much of my life.

She only hovers there just inside the doorway, and deadpans: “Was this a closet once?” as if being made to enter a closet that has been converted into med-room is a crime.

“I believe it was,” I say, and wave her closer.

I whisper off the back of my hand: “I just wanted to let you in on what they’re doing out there.”

“What’s the big mystery? We were just looking at pictures from my yoga retreat.”

She laughs without smiling: “Someone’s been watching too much Law & Order. C’mon, don’t be jealous. We’re just hitting it off.”

“More like getting it over,” I say, and she flinches, backs up a half-step, as if I am the one who might take advantage. The one who might don a ski mask and run my fingers through her hair or pop a thumb into her warm, soft mouth—which, of course, I want to. Anyone would. But above all, I am a professional.

I am little more than a sentient robot programmed to maintain a routine in order to help these residents live their best lives, a character trait of mine she will understand with time.

It’s the badge, for me, not the ski mask.

The new hire shrugs. “I don’t see any harm.”

“Would you let me lean against you that way?”

But the new hire does not say if she would or would not. She answers my question with a swish of her long golden hair and exits the med-room—a room, I suddenly realize, I have never shared with anyone until now, and which feels larger in her absence. Cavernous. A void whose emptiness the crunching of couch cushion springs now rises into, the snap of her unlocking her phone, the male residents’ oohs and aahs.

“You like to dance? That’s good,” Malcolm says. “There’s this place up the freeway. Every Tuesday Lexington Home hosts a dance there. Maybe you can take us next week.”

“And sometimes, on the way home, we stop to eat. There’s a Denny’s on the way back, and a Golden Corral,” Phil says.

"Well doesn’t that sound nice!” the new hire tells them. “Better than an all-inclusive resort,” she says, and they laugh with a glee that makes clear they have missed the sarcasm in her voice.

Or was this edge no more than youthful naïveté speaking? All I know is that in my experience the knot of the world’s mystery only winds tighter, truth and lies forever blur, with red herrings everywhere, and the only way a person can solve the world’s chaos is through rigid belief.

What beliefs did this new hire hold? Hedonism, for sure. But hedonism can’t make sense. Hedonism would only throw Malcolm and Phil further off.

“They don’t have booze, only soda. But the music’s alright,” Malcom says.

I pop a key into my mouth and tongue the groove as this continues.

I murmur the iconic opening two-tone of SVU’s intro song.

“Calm down,” I tell myself.

My ex-husband and I didn’t vacation much, but we did attend a wedding once, at a ranch where the bride boarded a horse.

And after the ceremony, the bride wanted the horse to appear in their wedding photos, so the stables were unlocked, a small sheeny black horse brought out. Just then, the deejay was starting up: music blared while he droned invitations to dance over the PA system, and no more than a few flashes in the horse startled, bucked, the groom knocked to the ground. “Don’t worry about me,” he told the guests that surrounded him after he came to.

With blood pouring from his mouth, he asked the deejay to crank the music up. Then he began to dance, and kept dancing with an increasing instability that his friends and family explained away as drunkenness, a byproduct of his joy. The same with the slurred speech, his glassy eyes. They drank more to catch up, to further believe their lie.

But concussions, I knew, were serious, and as the weddinggoers grew more raucous, I tried to catch him at the bar, to be the only one to ask him: “Are you sure you’re alright?” But before I could, the shuttle to the after party arrived, and my ex-husband and a groomsman slung the concussed groom’s arms over their shoulders. They carried him off as he continued to smile at his bride through a mouthful of blood.

Our locks and keys aren’t metal; they’re made of soft flesh, flesh that bends and reacts to the stimuli at hand, that reddens and chaps and freezes

And so, I twist the orange in the med-room’s lock and the deadbolt slides into place. I palm the keys back into my pocket and murmur the two-tone of SVU’s intro song to myself—but softly this time, a yoga breath. I stretch a taut smile over my face and round the corner into the living room. “Pura Vida,” I say, moving toward the couch.

“What are you doing?” she says. But if you add up the space left on either end of them, I know, there is clearly plenty left. More than plenty. It is science. “C’mon, make room!” I say, and keep saying, “Make room! Make room!” until they do.