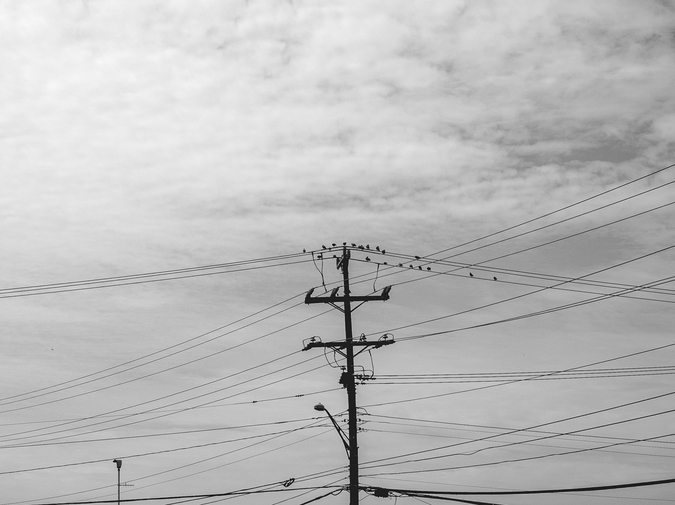 The man keeps thinking about the power lines—the ones that are strung over his house.

Sometimes at night, he can hear them up there, buzzing.

It's hard to sleep with all the noise.

Admittedly, it wasn't a noise that used to bother him; for a long time, he didn't even notice it. But then one night, somehow, it seems he became aware.

The man goes outside and stares up at the lines.

What if I cut those down? he says.

But he remembers a picture of Benjamin Franklin being electrocuted.

I guess I can't just do that, he says.

The man finds a ladder and goes up onto the roof. He sits there for a while, considering. He can think of lots of ways to get rid of the power lines.

But he can't imagine any of them actually working.

For instance, the man can imagine summoning a dragon, and having the dragon rip the power lines out. Or having a spaceship full of Martians come down, and use their laser cannons to zap them.

I guess I've never really been a practical person, the man says to himself, and gives a sigh.

He climbs back down the ladder and goes inside to bed.

Then the power lines vanish overnight.

He walks up and down the street. Only the power lines near his house are gone.

What happened to the power lines? he asks all his neighbors.

The lines? they all say. They can't be gone!

But they are—they've disappeared! Though the really strange thing is, all the man’s electrical equipment still works—his TV, his microwave, his toaster, his radio. But how? There's no power coming in.

The man goes out and looks again—he checks and re-checks.

But the power lines are definitely gone.

The man waits to see what his electric bill will say.

He thinks about going downtown to talk to the electric company.

But it's nice, saving money every month.

The man had been broke, if you want to know the truth. So the lack of an electric bill is a windfall. The man takes a daytrip to the museum and the aquarium.

He goes to a restaurant, sits there at the table.

The man eats a nice dinner. He has steak and mashed potatoes. He enjoys an expensive glass of wine. Then he goes to see a movie and eats a whole bag of popcorn.

But when he gets home that night, his house is on fire.

He stands there out front.

The fire trucks arrive and spray water all over.

Everything the man owns is destroyed.

Of course, the man didn't have any insurance, and he can't really live in the remains. He doesn't have enough money to go to a hotel, so he sleeps in a park.

And that night it rains.

The man's clothes are filthy, and he can't afford new ones, so when he gets to work, he's immediately fired.

To hell with this, the man says, and decides to leave town.

He hitchhikes, and ends up in the desert.

He's walking on out there, straight across the nothing, looking around at the lizards and plants. The sun is beating down. The man keeps on going. His clothes start to fade and fall apart.

But as the man goes, he feels something in him—something deep down inside, bubbling up.

And one night, he finds himself standing atop a mesa, there beneath the stars, looking up.

And there in the night sky, the man sees something swirling—and something inside him responds. And the lightning leaps out of him, up into the sky, forking this way and that as it flies.

And as the lightning goes up, the lightning comes down, and in the interplay, the man can see shapes—all the possibilities he once saw in his mind—the things no one ever saw but himself.

And even more, there are versions where the world itself was different—where everyone was 95 feet tall. Where people never spoke, but communicated through dreams. Where everyone had the ability to exchange selves.

And as the man watches, it all builds and builds; then there's a flash, and then it's gone—and he's gone, too.

And for a while, all there is, is darkness and silence.

Then cicadas start to buzz—first, one or two.

Ben Loory is the author of the collections Tales of Falling and Flying and Stories for Nighttime and Some for the Day. His fables and tales have appeared in The Sewanee Review, Tin House, The New Yorker, and Fairy Tale Review, and been heard on This American Life and Selected Shorts.