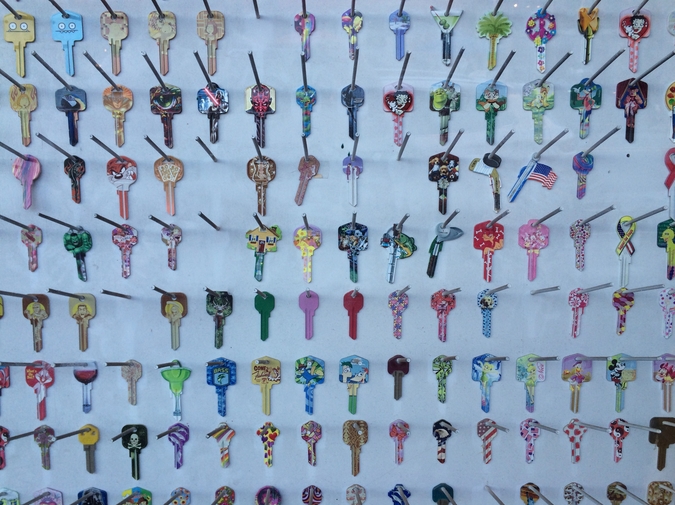 Well, I know it’s not ideal, but this whole business trip thing isn’t that bad. I’m sorry for leaving you alone with everything. Honestly, they told me two weeks when I was hired, then Robinson calls on the road and says it’s four. They want me to hit all the problem stores in the Midwest. Pizza Hut pays for my gas, and of course I eat for free whenever I get to one of our restaurants. They allow me fifty a day for lodging, but since we’re saving for that patio set I usually just sleep in the car if the room is over forty. In Iowa City it was hard to find something that cheap but Missouri is like motel central! I stayed at The Freaky Tiki in Blue Springs last night (more like the Leaky Tiki if you saw the bathroom) and it was nice to stretch my legs. Is it just me or are guys my age going for younger and younger women? Sometimes I take out the picture of us in San Diego before Reginald was born and just laugh. Your legs were exquisite (they still are, of course). My belly was lean and hairless. Kiss the kids for me. Love, Harley.

Still not sure if I’m cut out for this job. HR at EverBank was nothing like this. I hate firing people. Even worse is accusing people of lying. For the first week I was paired up with a guy from marketing named Jake, but he convinced the office that he didn’t mind a big pay cut as long as it meant he could keep his old job. So it’s just me for now. Basically I roll into town, take everyone by surprise and start calling people into the office. Eventually employees start to talk about each other. I investigate and then work with the manager to make whatever personnel and policy changes are necessary. Are you bored yet? How about this: I saw the World’s Largest Outhouse yesterday, one those gimmicks to get people to stop and buy hot dogs and postcards (it worked!) and other junk. The toilet seat is about twenty feet across and six feet off the ground, so it’s not functional, but the amazing thing is that it still smells like an outhouse! I don’t know how they do it.

I dreamed about my dad last night. In a way, I’m glad I lost the job at EverBank so we could take that trip to Alaska he was always talking about. Have you been eating any of the fish in the freezer? I could go for about eighty fish tacos right now. With Grandpa Phil’s Zesty Sauce.

It’s funny what you start to think about when you’ve been gone for almost three weeks. Last night when we talked you told me you hadn’t really gotten together with anybody since I left, but when Janey got on the phone she told me she got to watch all the Toy Stories while “Mommy’s friends came over.” For about five seconds my vision went kind of dark, but it was easy to convince myself of how ridiculous those thoughts are, right? I just want you to know I haven’t even tried ordering a porno on those hotel TVs. Most of the places I stay at don’t even have that kind of stuff available. How’s the apricot tree? Check the branches for bag worms if you get a chance.

Well, I think it finally happened. They kept telling me a time would come when I would turn a corner. When the job would feel natural and the anxiety would fade. Maybe fade isn’t the right word. Buried, perhaps. Anyway, I don’t get nauseous when I pull into the parking lot anymore. I’m starting to understand how a company like Pizza Hut survives, and how most of the troublemakers bring it on themselves. I thought you might get a kick out of this picture. It’s like the Jackelope postcards we’d always laugh about at those truck stops in Nevada, except this one is the Prairie Cat. Like a cross between a kitten and a prairie dog! So cute how it’s popping up out of the desert floor. I can almost hear it squeaking to you, “Hi Mara, you got to beleeeve! Your man is coming home soon so perrrrk up girl!” You sounded really tired on the phone the other day. Sometimes it was so quiet I thought you’d hung up on me. I promise when I get back we’ll do something great. Maybe a night at my brother Pat’s cabin in Garden Valley? Think about it.

Greetings from The Plains!

It says here the Dakota women took care of clothing, shelter, children, and cooking. Aren’t you glad you’re not a Dakota woman? :) What did the men do? Wear the clothes, sleep in the tepees, ignore the children and eat the food? I guess they were out hunting or something. Speaking of which, I’ve only got three more cities and then I’m home. I’m finding plenty of Waste here in Nebraska. In Tecumseh I found two employees using the kitchen to cook frybread after hours! They were also dealing ice (literally, ice, not meth) out the back. Their friends would take it in a wagon (pulled by a horse!) to the reservation and sell it door to door. Right now I’m looking for a motel room, but may be sleeping in the car again. Get my halibut out of the freezer on Friday morning ‘cause Baby, I’m almost home.

Listen. I know things aren’t that good with us right now. Sometimes I’ve been selfish. Sometimes you’ve been distant. Please wait until I get home before you decide to make some huge life change. And now this. I can’t believe this, but Robinson asked me to go two more weeks and take care of Colorado. I tried to call you at home last night but nobody answered. At first I said yes, but then I called Robinson back and said I couldn’t. He is an ass, working from home in his little brick mansion, but I could sense a hardness in his voice. Finally he said if I did this they’d give me some extra vacation before the next round of site visits. We both know how hard those eight months were last year when I was out of work. So, I decided to play along. I don’t want to go through that again. But if Robinson comes back in two weeks with another itinerary I’m quitting. When Dad was dying, he told me that life is about beauty, nothing more. Don’t let go of anything, he said. This is the most beautiful postcard I could find. Hold onto it, and when I see you again I’ll tell you exactly what it reminds me of.

Joe Plicka is a former editor of Quarter After Eight: A Journal of Innovative Writing. More recent work can be found inBooth and Kugelmaas: A Journal of Literary Humor. He writes, teaches, and raises a family in Hawaii.