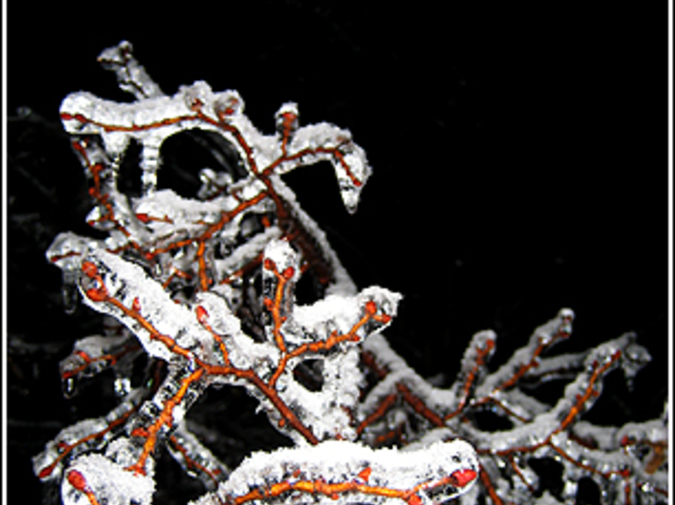 We were just out of Williams driving to Flagstaff in the dead of winter in the dead of night when one of us, the driver, shouted the rest of us awake and said he just saw one honker of an elk in the thick snow by the highway come this close to jumping in front of the car, and the whole rest of the way he shat bricks and had the rest of us peering bug-eyed out the windows, scanning the roadside drifts for more elk. "An elk isn't like a deer," he said, in this crazed voice. "It's much bigger, much heavier. It's like a moose. And if you hit an elk it's curtains for both sides. You should see cars that have hit elks. They're totaled, I mean totaled. The cars are so bent and twisted they need the jaws of life to get you out." Finally, at last, we got beyond the elk danger zone and into outer Flagstaff, and we hit the hotel where we were staying, en route to Phoenix, and over fireplace drinks the rest of us, those who had something to say, shared their views or facts or whatever about the subject. "If you see you're going to hit an elk or a moose," said another of us, a teacher, "don't swerve, just go on and hit it head on. If you swerve that's when the car will flip, and you'll die." And then one more of us, a dentist, said the deadly thing about elk or moose is that they're so tall. "You hit an animal that tall, and they don't just smash the bumper and the hood, they come right through the glass and kill you." And then the last of us, a market researcher, said she had to give us the bad news that even a deer can be lethal. "I know someone who hit a deer, just a deer, and went into a coma for weeks and was never the same again," she said, "not even now." It went on and on, this gloom and doom over antlered creatures, and finally we drifted into the restaurant, which surprised us all because it was a tepanyaki bar, one of those Benihana deals where a Japanese chef does this show right in front of your face with knives and a sizzling grill. In walks the chef, who turns out to be a hefty American in a tall red chef's hat and who says he was trained by a Japanese expert. We make our choices, all of which had shrimp in them, and the chef whales away on the grill, slashing and slicing, pouring this incendiary oil that makes this eyebrow-singeing ball of flame, and after all the talk about killer elk and deer the swirling flame makes two of us jump back in terror. Finally, at last, the mood changes and swings upbeat when the chef does this circus move with all the shrimps, slashing off their tails on the fiery grill and flipping them way up in the air with the flat of his knife and catching each little tail, amazing, in the top of his chef's hat. He does this again and again and doesn't miss a single tail, which leads the dentist to exclaim to the chef he should take his knives and hat up the highway and work in Vegas, where his shrimptail-flipping act will be a sensation. All is pleasant until the teacher goes and asks the driver a technical specific about the law and murder. "Although the outcome is the same," the teacher goes and says, "is there a difference between the way you guys treat someone who kills a person with one shot, a clean bullet to the head, as opposed to the way you treat someone who kills a person then dismembers him?" The driver, who is a prosecutor, doesn't even think about it. He immediately replies that there is a vast, huge difference. "The one who kills and dismembers would be treated far more harshly, no question about it, because what he's doing beyond the act of murder is heinous. He is depriving the victim's family of any opportunity to pay the victim his last respects in anything remotely resembling a normal way – to even look in peace at the dead body in the casket." The swerve of the conversation into more gloom and doom throws us all back into such a state of depression, we gulp our drinks and get the hell out of there and fly up to our rooms.

Next day, we all scour the breakfast menu, which is a long list, but every one of us chooses the fitness breakfast. We check out of the hotel and open the glass doors and step into a cold slap of air. We look around and sniff the air and see it's a gorgeous day – ice sparkling everywhere in the sharp sun. We're all so dazzlingly happy we decide to make a side trip and go stand on the edge of the Grand Canyon, free of tourists this time of year and all filled up with sun, nothing but sun, a mile deep.

On the way, we pass the carcass of an elk, covered with feasting crows. Soon the elk is a dot in the rear view mirror and then the flaming sun eats the dot.

Paul Silverman's stories have appeared in The South Dakota Review, Tampa Review, Minnetonka Review, Hobart Online, Pindeldyboz, Word Riot, Thieves Jargon, Alimentum, Smokelong Quarterly, The Pedestal Magazine, The Jabberwock Review, The Adirondack Review, Dogmatika, Tryst, The Summerset Review, VerbSap and many others. He's been a Spotlight Author inEclectica, which nominated his story, "The Home Front," for Best of the Net, 2008. His work is on the 2006 and 2008 Million Writers Award shortlist of Notable Online Stories. He has three Pushcart nominations for stories in Byline, Lily and The Worcester Review.