On a Layover in Brooklyn 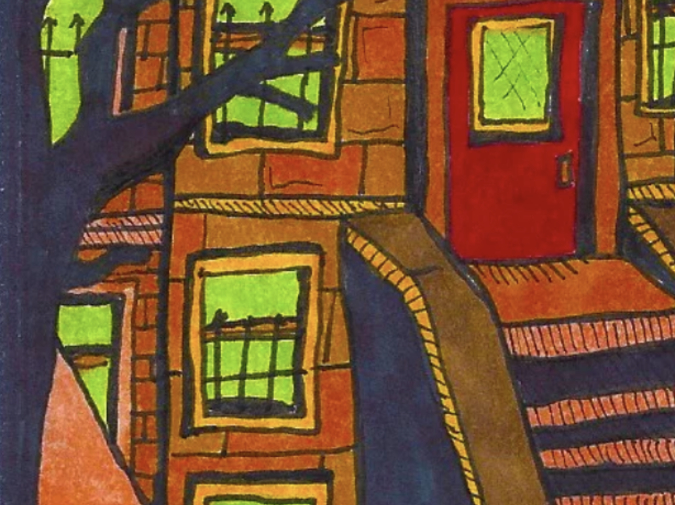 Right now, I’m on the plane to Phoenix, probably halfway there. I’m crying and have been crying all morning and night. Last night, in Brooklyn, I walked up to his stoop at 1ish and it was just like it was 20 days ago-- maybe I was even listening to the same song. I was coming straight from JFK and I felt awful, like shit. I guess really, I was coming straight from Moscow.

He was sitting on the steps. He was obscured by a clutch of drunk 20somethings walking uphill past him, leaving the pier, but I was looking out for him-- the cheesy topiary in front of his front door, his blonde hair in the bright yellow security light and the plume of cigarette smoke. He had a Camel Blue, a glass of sweet white wine, just like last time. It’s about 20 degrees cooler than it was then. I think I am wearing the same outfit; shitty, baggy, innocuous jeans.

This time, I tumble up the first few stairs and land between his knees. Really tight, tight hug, again. “Are you mad?” He’s drunk. But I love him when drunk even more. So excited; “what do you need? Food? Water? Both?” Last time, he was playing Vampire Weekend. Tonight, he’s playing Neil Young. He cues The Talking Heads… my girlfriend is better… and then another Vampire Weekend song and then a Wilco song he sings while we smoke two cigarettes.

He presses a novel he’s just started on to me-- “return it next time!” he says. Strange how at home I suddenly feel in this big, uncomfortable house filled with bad art and big empty rooms and floors with no one walking on them. He tells me he’s worried he’ll have nightmares from a play he’s just finished, The Pillowman. I read it in LaGuardia this morning, and it scared me too.

He leads me upstairs and peels off my reeking clothes, puts me in the shower-- “can I give you a shower?” And I don’t know if anyone ever has so thoroughly; Elliot used to stand away from the cold water while I washed. They took cold showers, and so I did too when we dated.

Maybe, last night I was just too tired to help clean myself. I just looked down while he soaped up my tits, got on his knees, ran his fingers and the long side of his hand between my legs, both sides, into my cunt. I close my eyes while he washes my hair, tilts my head back under the water. I’m constipated and bloated and I wonder if he notices all the meals I’ve eaten since we last saw each other. I think he pinches my sudsy nipples; I’m unable to do much but kind of grip him, warm, slippery arms and torso. I just hold him from behind, stand-up spooning, while he washes himself second. I press my palms into his hip bones. I run my hands up his belly. He turns off the water. He dries me off, he steers me again.

He throws me down onto the bed with a force that I feel is mostly a concession to me and what he knows I like. He drags me by my wet ankles back towards himself. He goes for my asshole directly. He flattens me against the bed with all the light weight of his body, then shoves himself into me from behind. I am not thinking at all, but he is, closes my throat in the crook of his elbow and lies on me, body on body. He fucks me this way for a while, then fingers me, then fucks me again. “It will hurt to come again” I say, which means I am almost on the verge of coming for the first time. He flips me over and slips his warm and almost hard enough cock into me and we lie, belly to belly, while he goes soft inside me. We lay like that for a long time and he tells me how much he loves me, how much he loves the person I am.

I cry before we sleep, and apologize. I say the truth, which is that I have to start this job next week and meet all these new people but all I want is to wallow and stall and dick around and follow my boyfriend wherever he goes. I cry and cry and sit up in the night and I curl awkwardly into him and he rests a heavy, bony hand on my face and I feel very nice and safe.

My alarm goes off two hours later and I lie in bed and rub his back and shoulders and scratch his head and cry and say how much I love him, stupidly, but he is asleep. And then I have to go to the airport, and he wakes up and says, “stay! I’ll make you an icecream sandwich if you stay.”

I will miss him I will miss him I am heartbroken all the time for him. He texted me minutes before my flight took off this morning “hey! You didn’t say goodbye!” I did, and he doesn’t remember.

Silas Jones is a writer and comix artist from the intermountain West. Their work has appeared in The Grape, The Wilder Voice, and in some zines lost to time. They live and work year round on a very small island Back East.