O Husband! My Husband! or, A Common Noun 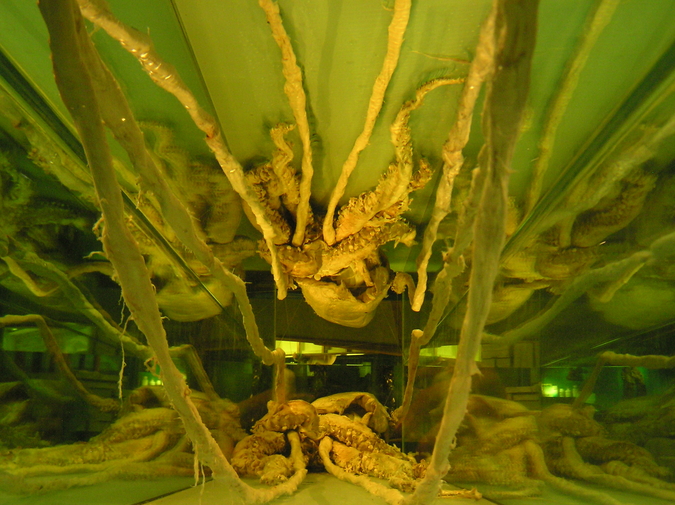 Standing in the kitchen the other day, out of nowhere I became disoriented and unsure of where I stood. Not where I stood in the house—our kitchen was unmistakable, with its busy yellow wallpaper, the sporadic patches of fall vegetables adorning it, the pumpkins and eggplants and squash, the floor tiled in plastic laminate, the cabinets pale yellow with white trim—but where I stood in time, what year it was, whether my husband was here or there. Or nowhere at all.

Our kitchen stove was the color of mustard. Gas. Not fancy and electric. My husband breathed it in once and blistered for weeks, months, years. Before he left—for somewhere far away was all he’d say, as if I couldn’t open the morning paper and read—he fried me two eggs atop the stove, black spatula poised in his left hand. It was a Monday morning, and so when the Boomtown Rats came over the speaker a couple of years later, Bob Geldof singing, “I don’t like Mondays, tell me why, I don’t like Mondays, tell me why,” I wanted to say, “Bob! Isn’t it obvious? That’s the last day he made me eggs,” but then I wasn’t sure if, for the same reason, maybe I did like Mondays after all.

“You’ll take care of yourself?” my husband asked, before he left.

Not so long after, two men came to the door, clean, well-shaven, Class “A” uniforms and all: blue coats and black ties. Spit-shined shoes. A hollow knock. An autumn breeze. “What a brave thing,” the chaplain said. “You can rest assured his reward will be eternal.” A browning leaf blew against the man’s perfectly pressed pant leg. The Badge of Merit, the Purple Heart, a Gold Star, and—

God, where am I? Have I come unstuck in time again?

Husband is standing here now, in the kitchen. By the mustard stove.

“What would have become of you if I’d stayed away too long?” he asks, as if asking, Well, would the car still start if we ceased to fill it with gas? He doesn’t know the car’s been gone for years, the paint blistered in the sun. “And anyway,” he says, “I hear things haven’t been going so well at home.” He gives me a smile and a hug but does not fry two eggs atop the stove.

The other day, I woke and he was next to me in bed, on his back, eyes closed, not a single snore. Oh, how he used to snore. In a moment of aggravation, I once said to him, “I thought a burglar had broken in and was strangling you to death.” What I wouldn’t give to hear that choking sound now.

When my husband left for “far away,” he took his middle brother, Pete, with him, because, after all, three more unmarried brothers remained back in their parents’ house and things were beginning to get crowded at the old family home. Still, I was surprised the other day when Pete showed up to visit. I hadn’t seen him for so long, and yet he remained absolutely unchanged. “Why do you both look so good,” I asked, “and I so bad?” But Pete only chuckled. “After all,” I said, “you’re the ones who went so far away.”

“Shall we listen to some music?” Husband asked.

He flipped through the records stacked on the floor. “How about The Doors?”

“You hate The Doors,” Pete said.

I think Pete lived in New Haven, but I can no longer be sure.

“I tell you,” Pete said. “I’m starving. How about some of those eggs?”

“Yes,” Husband said then, calling out to me. “How about some of those eggs?”

“I thought eggs were your specialty,” Pete said to his brother. “You used to make them all the time, not so long ago, when we both still lived back at home with Pop.”

“Oh, yes. You’re right,” Husband said. “That’s true.” He, too, looked lost for a moment. Unstuck in time. Then he found the thread: “But I’ve made so many eggs in my life, eggs and eggs and eggs and more eggs. This kitchen even looks like a yolk,” he said. “Why look at that old gas stove.” He pointed at the mustard-colored thing.

Not so long ago, their mother was the one making them eggs. Teaching my husband to make eggs for himself, for a time when she’d no longer be around.

When he’d have to take care of a family of his own.

“Is everything all right?” Pete asked, and, “Tip-top,” Husband said.

Still, though, I’m unsure where I am.

Ryan Bloom is an English lecturer at the University of Maryland, Baltimore County. He has written for The New Yorker, Guernica, PEN America, Creative Nonfiction / In Fact Books, Salon, Black Clock, the Arabesques Review, the American Prospect, and other publications. His translation of Albert Camus’ Notebooks 1951-1959 (Rowman and Littlefield) was nominated for the 2009 French-American Foundation and Florence Gould Foundation Prize for Superior English translation of French prose. In 2014 he was awarded the Eli Cantor Fellowship by The Corporation of Yaddo, an artist’s colony in Saratoga Springs, New York.