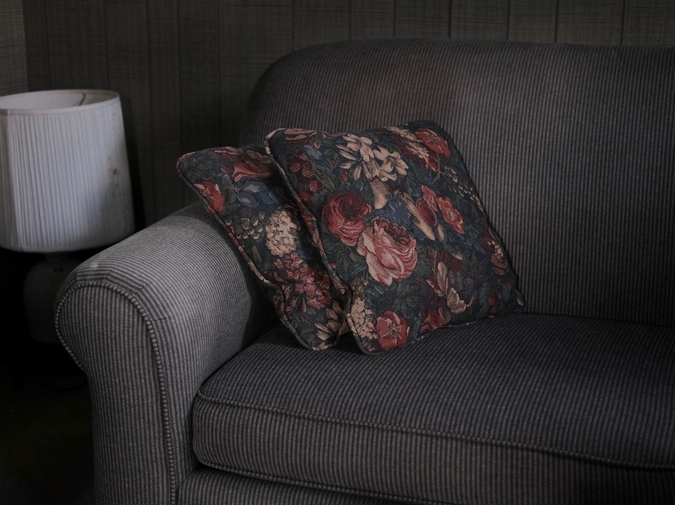 We went to the college up north to get away from our families, but we didn’t leave behind our need for something like a domestic bond.  We were the ones who signed up for the dorm where boys and girls (men and women, they called us, optimistically) occupied the same hall, shared a common bathroom.  It was very enlightened, though it caused some of us to suffer privately with constipation.  Mornings and evenings found us chatting side by side at the sinks in the pajama sets our parents had given us for graduation. You didn’t want to be the one to stink up all that enlightenment.

Perhaps to compensate for the way we resolutely refused to react when we saw each other in monogrammed towels, there was touching: high-fives and hugs and backrub chains; people with long hair grooming one another.  One room would host a movie night and we’d pile on a futon mattress like a litter of puppies.

The weather turned, and as the cold leached in the windows, there was more cuddling, more platonic sleepovers with study buddies.  The bathroom mirrors were eternally fogged with the steam of our longer showers.   We had to wipe the mirrors to see ourselves.  We had to downplay any private anticipation of the bodies emerging from the steam clouds. Dorm-cest, that was called.

Then Patrick, a skinny boy whose room we seldom used for movie night, lost his python.  Its cage was up against the window, and the draft had been more than a cold-blooded creature could take.

For a few days he didn’t tell anyone.  We weren’t supposed to have pets.

But word got out.  We all kept our doors open, Patrick included, and someone noticed.

“Guys,” said Brianna, interrupting a movie in Luke’s room, “There is a freaking snake on the loose.”

We jumped off the futon and squealed.  After a brief debate we decided not to tell the RA.  We didn’t want it to reflect badly on us.

By the second week you could hear the feeder mice when you walked past Patrick’s room. They were getting bigger and bolder.  Celebratory.  A few of them hit puberty and began to mate.

We lay awake, terrified that our warmth would draw the snake.

Kara and Steve were the ones who knew about music.  Steve had an old-school stereo with giant speakers and they would stay up all night playing records to each other.  She often slept there, listening to blues songs with a soothing overlay of crackle and hiss.  We all figured Steve was gay.

Then suddenly they weren’t talking to each other.  Kara slept in her own room.  She closed her door.

Showers shortened.  The convivial conversations at the sinks dissolved into a hiss of bristles, then spit and hurry back to safety, wherever that was.  Jake met a someone in the girls’ dorm next door and started sleeping there, returning to us only to pick up textbooks and stink up our bathroom.

I was the one who discovered that Steve was not entirely gay when I tried to sneak in a late-night poop and was greeted with moaning from the shower stalls.  It was Steve and Leslie.  I was so put off that I didn’t go for a week and eventually resorted to taking a box of stimulant laxatives that made me very hyper.  I ran around saying weird shit about the government for an hour before running into the farthest-down stall and promptly clogging it.

In the common spaces, people left angry notes about respect.  It was the RA who plunged the toilet in the end.

Someone wrote a racial epithet on Nina’s door.  Everyone said that it couldn’t have been one of us, that someone had let in the wrong sort of visitor, but we looked at one another and wondered.

We hadn’t fallen apart completely.  Someone comforted Brianna, smoothed her golden hair, watched her while she slept.

Wendy came back from a fraternity semi-formal without her shoes.  She said she’d had a good time, but she started sleeping with her door closed.  A lot of us were closing our doors by then.

Kaylee had been spending time with a campus animal rights group. One afternoon she stormed into Patrick’s room and set the feeder mice free.

We pointed out that now the snake could eat them.  This made Kaylee cry.  She had to be comforted.

“Don’t worry,” said Tyler, “By now the snake is long gone.”  That night he lost his virginity to Kaylee in her loft bed.  He said a prayer of thankfulness.  He was the only one of us who still prayed so far from home.

It was Joan who reported the mice to the administration.  We called it vengeance.  Joan insisted mice were worse than snakes: warm-blooded things are furtive.

An exterminator was booked for the Thanksgiving holiday.  Instructions were given on how to prepare our rooms so that we would not return to a fine coating of poison on all our possessions.  We trundled home with everything on our backs like refugees.

“The mouse poison will surely kill the snake,” we said, a tinge of regret in our vindication.

Patrick did not come back from Thanksgiving.  The girl he had taken to his senior prom gave birth prematurely.  He was a father.  We could no more stop talking about this than if he’d become an octopus.

There was a new smell.  We attributed it to the exterminators’ cleansing poison, but as finals week commenced, the odor grew.  Its unpleasantness asserted itself.  Randy from the country declared that it was something dead.

I looked in Patrick’s closet, and to have found him there dead would’ve made more sense to me than his choice to stay home and take incompletes.  In the closet were only the clothes he never wore.

It was Leslie who told us: the smell came from Steve’s room.  At first, she’d thought it was only in her nose.  She thought it was the guilt of something she’d done to Kara.  It didn’t make much sense and I wondered if she’d been taking stimulant laxatives.  Wouldn’t Steve notice a smell in his own room?  No, he confessed.  He’d mixed the wrong chemicals in lab and seared his nostrils.  When Leslie mentioned the smell, he’d pretended she was crazy.

We ran down the hallway and threw open his door, and yes.  Some of us retched.  We dumped desk drawers and ripped into futon cushions.  We shook his textbooks until pages fell from the spines.  At last someone thought to dismantle his giant speakers.

Inside, every wire and node was wrapped in putrid snake meat.  We looked at it for a long time, each of us figuring out for ourselves what had happened: the snake had gone there seeking warmth and found only electricity.

Sarah Harris Wallman teaches creative writing at Albertus Magnus College in New Haven, CT, where she lives with her husband and sons.  In 2013, she won Prada's international fiction prize.  Other stories that are a bit too dark for her mother's taste appear on the Great Jones Street app.