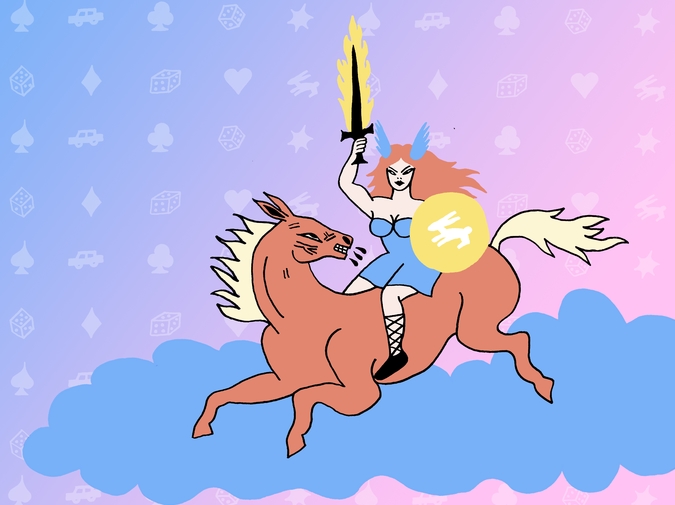 In loving memory of the Dawghouse

So I was 19 and I lived at the Big House and I was built like a Valkyrie. Big tits, big muscles, looked like I would swoop you up if you died on the battlefield, that sort of thing. And I was JD’s girl. At least that’s what everyone thought, including me. The Big House was always full of our drunk, broke friends, some who lived there and many who didn’t. Only six of us were residents, JD and I on the ground floor in a room next to Bunny’s, and Toolie and Cosimo and Dom upstairs, where one of the rooms had been split into two with a makeshift plywood wall. Everyone knew we threw the same party every week, so they’d come over to sink into the tattered couch or raid the fridge or climb up onto the roof, yelping like wild dogs. It felt like paradise. The walls would seep sweat, and the boys would crouch on the linoleum and lose the same twenty dollars to each other over and over in games of cee-lo.

I had a job at a warehouse, where I loaded pallets for 8 hours a day. It was monotonous and tiring but I liked the strain I felt in my biceps and the mindlessness of it all. JD had the opposite schedule. He worked the graveyard valet shift at the Avalon Hotel and Casino and went from our parties straight to his job, squeezing as much as he could from life. He had the frantic, wanton energy of a chained-up greyhound, and he was built like one too, all sinewy and taut. So it was one of those nights where he knew he had to leave in a few hours when he wanted to run.

We were in the back alley, which was dirt and gravel and two deep ruts worn by tires. People left stuff out there, people that didn’t even live nearby, who would come to drop off a stained mattress or a table missing a leg, and drive off into the night, relieved of their burdens. JD challenged Bunny to a race, smiling a wide manic grin that didn’t leave space to decline. “From here to that fridge,” JD said, pointing down the alley to a refrigerator that lay horizontal in the dirt. The boys stood side by side, shaking their ankles to limber up. Bunny was stocky, and he had a mean face dotted with freckles that hardly showed up against his dark skin. Cosimo asked me in a whisper who I was putting money on. He liked to cause trouble. I looked at the two of them and mouthed my answer to Cosimo so that my boyfriend wouldn’t hear. Bunny’s tree trunk legs took off so fast that it made JD look like he was walking. Cosimo slipped me a fiver.

Later, Bunny came and found me while I leaned against the rusted stove in the kitchen, drowsy and a little drunk. I could feel the hot dampness emanating off his skin, still coated in sweat from running. He leaned in so close his lips touched my ear. A shock rippled down to my thighs. “Can you spot me five bucks?”

I trailed behind him into the living room where he knelt with Chester and Toolie and rolled a four, five, six on the first try. He knew I was watching and he looked right up at me and held my gaze for one long second before turning away to scoop all the cash off the ground. JD came out of our bedroom in his beige work shirt. His shift was about to begin and I wouldn’t see him until morning, when I was getting dressed for work. That’s how it was with us. We only ever saw each other in the overlaps. I kissed him on the cheek, he told me he loved me and patted me on the butt as he walked out the door.

It was already over for me. When Bunny tapped on my window that night, I opened it to let him in. Our bedroom doors were next to each other, but he didn’t want to be seen by Cosimo, sitting on the couch in the party’s aftermath, sipping a forty. He stepped over the windowsill. I took his hand to steady him. I could feel the thick calluses on his palms. We stood silent in front of each other until I couldn’t take it. I leaned into his neck and bit his earlobe. He pulled me wordlessly to the mattress on the floor.

Every night he’d sleep next to me, grabbing my belly, my hair, my thighs like he thought I might disappear. When I woke up, he’d be the one who was gone, and I’d hear JD’s keys at the front door. I would put down the black-out curtains for him and get dressed for work. At the warehouse I stacked cases of soup cans, cereal boxes, paper towels, while JD slept in our bed. By night I’d be back in Bunny’s dense arms, humming into his chest so I wouldn’t accidentally tell him I loved him.

When I was with JD, I did my best to hide the seeping, sickening guilt that flooded my veins. I couldn’t even figure out what I wanted. There was a fork in the road and I was idling in front of it, hoping someone would take the choice out of my hands for me. We never spoke about it, but I knew Bunny felt it too. When we were alone, he’d lay on top of me, heavy and content. But around others, his conscience seemed to be mangling him inside. I could almost see the shame resonate off his body every time JD would slap him on the shoulder or laugh at one of his jokes or hand him a beer. I wondered if anyone else could tell. Toolie and Dom were usually too wrapped up in playing cards or trying to score drugs, and Cosimo had a permanent gleam in his eye so it always looked like he knew something he shouldn’t. Despite all this, the gentle rhythm of fingertips on glass still arrived each night after JD left, and I’d open the window with my heart pulsing between my legs.

It all got worse one Friday night, when the Big House was full of everyone we knew and some people we didn’t, and JD was in the mood for trouble. He wanted Bunny to shoot dice with him. He kept betting more and drinking more, throwing bills on the linoleum, and Bunny flinched every time he had to lean forward and pick up JD’s crumpled money. But JD just laughed and shoved Bunny’s shoulder and said, “This is the only guy I don’t mind losing to.” Bunny tried to smile. I reminded JD that his shift started in 30. The night was slipping away. He kissed me sloppily on his way out the door, all the tips from his previous shift tucked into the pocket of Bunny’s jeans.

To control JD would be like controlling one of those inflatable tube men at car dealerships, the kind that flail with the air being pumped through them. But I still felt sick about what happened, like it was all my fault. Not because I didn’t stop him, which would have been fruitless, but because I had tempted fate by trying to hold onto everything I wanted all at once. Bunny was laying on JD’s side of the bed later that night when I got the call, tapping my belly like I was a melon and he wanted to hear if I was ripe. Even before I heard the voice on the other end, I knew something was awry and my breath grabbed at my throat.

So this is what happened: JD stepped on the gas instead of the brakes, which is probably a metaphor for all of our lives. He crumpled someone’s Toyota Cressida into the brick wall of the parking garage, and he crumpled himself inside of it. He was at the medical center off the I-8, the tear-distorted voice of his sister told me through the phone. Bunny’s eyes had been closed but they opened and looked at me with a sweet ignorance that I was about to shatter. I knew we would lose something that couldn’t be retrieved and I didn’t want to do it. “JD is in a coma,” I said, and my own voice sounded like a stranger’s in my mouth.

I sat beside the beeping machines for three days straight, long enough that my mind learned to drown out the sound of them. The room was blinding, so clean that I felt like a stain on its surface. I held JD’s unresponsive hand as if I were the good girlfriend I had not been for a long time. I felt like a fraud in front of his mom and sister, but they didn’t seem to notice. I ignored the calls pouring into my phone. Mostly from the warehouse, wondering where I was, or Bunny, whose name appeared over and over on my screen but I never picked up. I didn’t know what I would do if I saw him and I didn’t really want to find out. On the fourth day of my vigil, JD’s mom told me to go home and sleep.

At the Big House, someone had taken over our chores. The trash made it to the curb, the water jugs got refilled. I had the feeling it was Bunny’s doing, but I hadn’t seen him. I stayed in my room with the blackout curtains drawn day and night, so I never knew what time it was. I left to pee only when I heard the living room fall silent. I got a call from JD’s sister. “Bunny started a fundraiser,” she told me, tears in her throat. All of the medical expenses would be covered. I sunk back into half-sleep.

I heard fingertips on the windowpane. I didn’t open my eyes yet in case the noise wasn’t real. It was hard to tell what was real because I kept hoping to wake up from this terrible dream that my life was turning out to be. The sound continued like the over-paced heartbeat of a rabbit. I pushed aside the dense black fabric that blocked me from the outside world. There he stood, his mean face plaintive under the glow of the porch light. His mouth sucked at air as if he were choking. He rocked back and forth on his feet. I could barely see those freckles shining on his wet face. I tried to open the window but my arms felt weak and floppy. He lifted it the rest of the way and stepped in. His breaths came in gasps in the stale air of the bedroom. He reached out for me but let his hands fall. He dropped to his knees as if he’d taken a sword through the gut. I wanted to scoop him up, carry him away from the world we were trapped in. Instead, I knelt beside him. He couldn’t stop himself. He reached for me again, breathing in the skin on my neck, my scalp. He closed his eyes and groaned as he pulled me to the mattress, as he clutched me to his chest.

Cora Lee Womble-Miesner was born and raised in San Diego. Her writing has been featured in Literary Hub, BUST Magazine, and The Drunken Canal, among other publications. She can be found at corawomblemiesner.wordpress.com.