Near Nature, Near Perfect 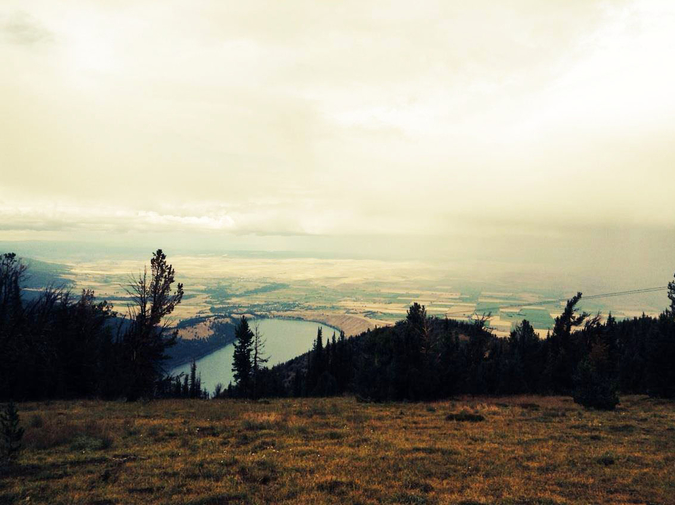 Going on the hike was a bad idea, she said.

We’re just punishing ourselves for no reason. No real reason.

We went over a bridge made of bright new lumber, probably the hard work of an Eagle Scout, some future Business Leader of America. I walked behind her as we climbed toward a ridge that would provide us with a panoramic view of the Spokane River Valley. The air carried a springtime stuffiness. My hangover wasn’t as debilitating as the shame. The fear that everyone would find out. The potential embarrassment. The image of her roommate eyeing me from the kitchen as I left Sarah’s bedroom and walked out the front door.

She tramped dutifully forward, and I watched her hips sway. Her blonde hair bounced above her shoulders, corralled by a navy Gonzaga University ball cap. We stopped by a fallen tree. I looked down at the creek where stones, shiny and wet, made a path across.

It wasn’t that bad, right? she asked.

Not that bad, I said.

You should not have worn your Roman collar, she said.

I wanted to go change. You wouldn’t let me.

At least I took the collar out, I said. Most people probably figured I was wearing a black suit.

It was all so tawdry and quotidian. That was the worst part. The situation lacked imagination. It was the scrub pine of Catholic scandal.

Sunshine penetrated the trees and warmed my shoulders like her arms on my neck dancing at the Horseshoe surrounded by college kids. And there was the lime-tang bitterness of Corona on her tongue and, at her place, the scrape of her jeans across my knuckles. On the walk back to the Jesuit community afterward, I couldn’t stop smelling my fingers.

In an attempt to escape the iron lung of guilt, I reminded myself of all the things I wasn’t doing wrong. For example, Sarah wasn’t married. For example, she was an adult. For example, we didn’t have sex sex, it was a very high schoolish oral only affair, which I regretted. For the sheer spine-bending guilt I was feeling, I should have gotten laid.

A pair of joggers appeared like a florescent specter and we instinctively stopped holding hands. The joggers had the teeth-clattering excess energy found in fitness freaks and meth addicts. They smiled at Sarah and me like we weren’t a disaster. The man stopped the timer on his watch and stood in front of us.

Hey just to let you know, he said, the trail is wiped out up ahead. From all the rain.

We had to climb up over all of these rocks, said the woman. I tore my leggings. As if we wouldn’t believe her unless we saw proof, the woman turned around and showed off the small tear on her bright green tights right below her flat, middle-aged ass.

Thanks for letting us know, I said.

The man restarted his watch and then the two of them bounded down the trail, their footsteps echoing off the trees.

What do you think? I asked.

I didn’t come all the way up here feeling like shit to turn around now.

It was ten minutes before we arrived at the mudslide. Below the trail, a tree’s roots jutted nakedly into the air. Sarah began climbing up the steep bank to our left, and I followed. We grabbed onto branches and dug our fingers into the dirt. Afraid of heights, I refused to look down. We took a break at a pile of rocks well above the trail.

Do you remember everything I said last night? she asked.

You mean do I remember you crying and saying you loved me?

She laughed and then covered her face with her hands. Yeah, that part, she said. I was drunk, but I want you to know that I meant what I said. She refused to look at me, instead focusing her attention on a pile of pine needles stuck in a crevice.

On the way back down, she slipped. I lurched forward and caught her by the elbow, but then I lost my footing, and we slid down and landed hard on the trail. We clutched our tailbones. We snickered at our lack of grace and dusted each other off.

When we arrived at the viewpoint, the emerald wheat fields to the east shined in the noonday sun. The Spokane River sparkled like it had nuclear properties. As I took in the view, I thought about what my grandfather used to say before he died—God is second chances.

See, said Sarah. The punishment was worth it.

She grabbed my hand. I squeezed before letting go, like we had finished saying the Our Father at Mass.

Sean Towey has work published or forthcoming in the minnesota review, Word Riot, The Rumpus, and elsewhere. He was a semi-finalist for the St. Lawrence Book Award at Black Lawrence Press. He is working on a PhD in English/Creative Writing at Florida State University, where he was recently the recipient of an Emerging Writer Award, chosen by Debra Monroe. He serves as the Online Editor for Southeast Review. He grew up in Tacoma, and he currently lives in Tallahassee with his wife Erin, a nationally recognized scholar on the work of Amy Sherman-Palladino.