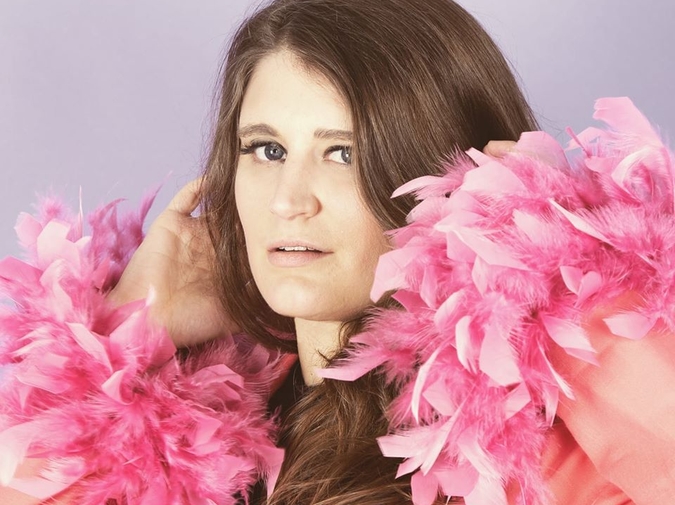 I was disappointed he didn’t look fatter on television. Isn’t the camera supposed to add ten pounds? To be honest, he looked pretty good. The best anyone I’ve ever fooled around with looked on a tiny screen.

I watched my ex-almost-boyfriend on an Amazon Prime show. In the show, a group of stand-up comedians go through the journey of auditioning for Just For Laughs: New Faces. Every year Just For Laughs selects a group of on the rise comedians, and these are the New Faces - being selected is the definition of a big break. My ex is part of a group of comedians who are in the final stages of auditioning, cameras are following them around, and will document what happens to them: if their dreams come true or are crushed.

My almost-ex was almost selected. I was never around when the cameras were following him, as I lived in Portland at the time and he was in Los Angeles. I visited LA and we hooked up while he talked to me equally about how badly he hoped he would get it, and that the woman he was seeing wouldn’t be upset we were having sex. I saw her the next day at a party and she told everyone there she was leaving him to become a lesbian, so I didn’t feel guilty.

My almost-ex was freaking out in the way only men with egos can. Freaking out that he wasn’t sure where his career was going, and he was thinking of moving back to Portland to be with me, and closer to his family. He wanted to marry me. We named our future children. (Luella and Henson.) We had sex in his room that was so small it barely fit his full-sized bed. I slept next to him, my pussy sore from the Lifestyle condoms we had used that he had got for free at Out of Closet.

I have a magic pussy. Or at least a legendary one. If you are looking to somehow advance in your career as a stand-up comedian, my vagina can probably help you. If you are waiting to see if you got New Faces at Just for Laughs, come up and see me sometime. I have slept with at least one person of almost every New Faces Class, statistically it will only improve your chances.

My pussy is magic because I am attracted to talent. She burns when I walk into a room and see a self-loathing man take complete control of a room with only his words and because he learned humor as a defensive mechanism. My pussy would make a killer agent. I’m very good at knowing who will get their big break. I am even better at picking people who will crumble to pieces when they get it.

I liked my almost-ex when I first started seeing him but found him very difficult. Of course, I am attracted to that difficultly. I first met him at a show and told him I thought he was funny. He was both overweight and much shorter than me, but it worked for him. He had a handsome face, lots of charisma, and really was very, very funny. The only thing he said to me that first night was “I have a girlfriend.” Later when our relationship turned romantic, I cherished our first meeting, assuming that it meant there had been an instant spark between us so strong that was all he managed to say.

He liked being around the Portland scene and came often to see his family. But mostly he came for the rush of attention. Comedians in my scene seemed to think he was famous. They drooled after him as if he was already a celebrity. “This next guy is going to be famous,” hosts would say when they brought him up on stage for shows in bars with ten people in the audience. Women flocked to him in bars. He would ignore me to flirt with them. Once leaving me alone after a show to give one of them “a friendly ride home.” An hour later he asked if he could come over. I said no. “Man why did I do that?” was the only apology I received, even though we both knew the answer. He wanted to be treated like he was a star not a boyfriend.

As I watched the show a lot of our relationship began to make sense. Although he didn’t tell me, I could tell the timeline of him finding out about JFL and him disengaging from our relationship were the same.

He became less interested in me. He came to Portland for a week. We fought through text the entire time, my phone vibrating with anger. I would invite him over to have dinner or hang out. He would politely decline with some excuse and then try to come over to my house at 2 am. After not only his shows but a few rounds of karaoke. “I’m not your fuck buddy after-thought,” I kept repeating. He told me he couldn’t understand why I was mad and what he had done wrong. I reminded him that last time we had seen each other we had named our future children and that he had started and wanted this relationship. I want him to fuck me so badly, just before ten o’clock.

On TV, he is charming, and I am rooting for him even though I already know the answer. He takes out his phone at one point and dismisses a text notification, and I wonder if the text he is ignoring is from me. I like to think I am being actively ignored on television. It makes me feel involved.

After my almost-ex goes back to LA even though we never could agree on a time to have sex, we started exchanging nudes. Well, my nudes for his compliments. I spend hours on the floor of my bedroom getting everything right, the angles, lighting, which thigh high boots look the best with my breasts. One day I send him the most revealing picture I have ever taken. I feel dirty and high off the idea of how bad I am. He doesn't respond.

A few hours later my insecurity is at an all-time high, so I text him to make sure he got it. I feel sick when my phone lights up.

“Oh, well to be honest I already came so now I’m just thinking about food”

His entire storyline is not how bad he wants it, but how awful he will feel if he doesn’t get it. I never want to see his short, fat, handsome face again. But, I feel bad for him.

My new boyfriend Marcus is auditioning for Just For Laughs this year. He is very worried. We lie in bed, and I tell him not to worry because I have a magic pussy. This is the third time we have attempted to have sex, he is too big for me. I wonder if we have to go all the way for it to count? I think that view of sex is very limited, and I reject it from my mind.

He also gets very close and doesn't get it. As he tells me about it, I think about all the times I didn’t orgasm.

Maybe the magic is gone, but at least it made good TV.

Elizabeth Teets is a Portland based writer, fashionista, and comedian. She is the host and producer of the Hollywood Theater program Isn’t She Great. Her writings can be found at Catapult, Reductress, The Hard Times, and more. Follow her on Twitter @elizabethteets.