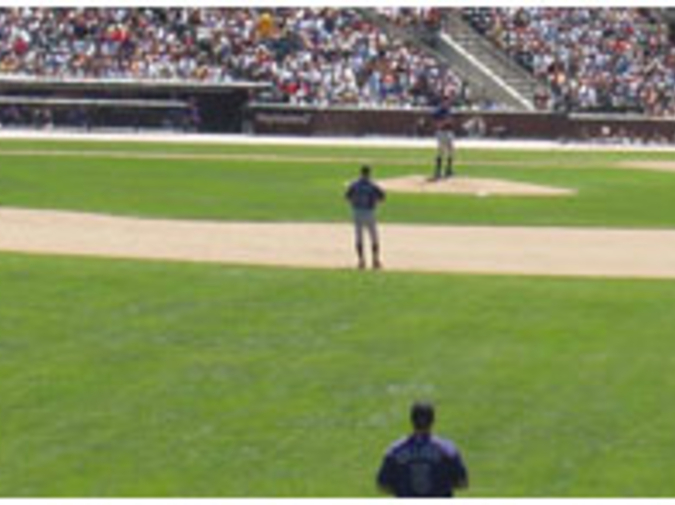 Summers we watched baseball, my father, my uncle and me sitting riveted for innumerable innings, rooting for the Mets. We scoffed at the umpires, cheered when the players kicked dirt on their shoes over a bad call, discussed the plays, remembered past glories, and added our voices to the announcers’ ritual of praise for Willie’s breathtaking basket catches. There was the way the Stork covered the ground, how close Tom had been to a no-hitter, and how good Tug was at closing things up. Cleon and Ed and Rusty and Tommy, Bud and Tug and Tom, and the great Willie Mays, come home to us.

I was seven the year they won the series, eleven when they won the pennant. Those years describe the totality of my love for baseball. Earlier, I was too young, afterward, a teenager with other concerns than baseball.

My mother: a cute, not quite hip, early 70’s girlish mom. Think Carol Brady. She doesn’t bring snacks, just comes down for a peek at the game. We handle the snacks. The men drink tiny bottles of beer, not more than one or two, from the basement fridge. I drink iced tea. We have pretzels, and my favorite, salted nuts. I have dibs on the cashews, my uncle the hazelnuts, and my father the almonds. My mother, if she is there for long, will eat the Brazil nuts, and my aunt the pecans. We leave the peanuts, and open another can. We are spellbound, cheering with thousands of fans in the park, and with our neighbors.

We can hear the neighbors. Some have moved the TV out to the front porch to escape the heat of indoors. It is a more innocent time, there is no crime, there are no noise complaints, there is no air-conditioning. Or rather, air-conditioning has not achieved ubiquity, like now. It is still leading-edge, and this neighborhood is contentedly following-edge. We, however, are indoors, nice and cool in our cavelike basement, parceling out the salted nuts.

From upstairs, my aunt will call out, “What’s the score?” And my uncle will answer her, “Two to one, but there’s a man on base.” My aunt will nod sagely, the importance of the game not in question, although she seldom watches. She is their sister, the eldest. My uncle, the youngest, is divorced and lives at our house. Over the course of five years of hardly missing a game, not even a double header, there must be hundreds of times, if not thousands, when she calls out for the score. Times when she asks me, even. My father and my uncle might have another reason for concern than team loyalty. They might have a bet on the game. They gamble like they drink beer, a little at a time, but consistently, and they win consistently, and occasionally, big. For the pennant, my uncle won big, because the odds were long. I got a bicycle. It was my confirmation, but we weren’t religious, and I always knew I got the bicycle more for the miracle Mets than for the ceremony.

Fast forward twenty years, twenty-five. My father and I still watch the ballgame, but now it is on the infrequent occasions when I visit. Infrequent to them, but I feel like I am there almost every month. Every other month at least. I realize that my father feels I have deliberately left them by moving two hours away. He doesn’t understand it’s only that I’ve lost my interest in baseball, and other things I used to like.

My aunt lost her only son, then her husband. My uncle died. His three grown children all have some degree of emotional problems, and this, my father says, is what killed him. But I know what killed him: the same thing that is killing my father. Diabetes, together with hepatitis contracted in the service during the War, my father in the navy, my uncle, the marines. My uncle had the worse diabetes, and died five years ago. My father, relatively healthier, is succumbing to treatments for prostate cancer that have weakened his liver and reinvigorated his hepatitis. My mother, now more Simone Signoret than Florence Henderson, thinks it was all the little bottles of beer, and, truth be told, the Scotch. It is all of those things, and the inability to swallow the hundred plus dollars a month in organic, vegetarian, potency-guaranteed supplements that I buy, on my graduate school-inspired artistic budget, which slowed his decline for the month that he took them. Why isn’t he taking them any more? Why didn’t the old gambler stop the treatments and gamble that the cancer would not return?

In the living room, which will soon become the sick room, will soon have the hospital bed where he will spend the last three weeks of his life, the two of us watch the game. Afterwards, in the post-game show, we learn that Mickey Mantle is getting a liver transplant, and I cannot sit beside my ailing father to hear this news. I get up and go out to the porch, as I have seen him do when he is upset and needs fresh air.

At the same time Mickey Mantle is getting his emergency liver transplant, not having to wait in line because he is Mickey Mantle, my father, with whom I watched over a thousand baseball games, is dying of liver failure, and although he is not that much older than Mantle, and was a strong and active man, there is no possibility of a liver transplant for him, no throngs of cheering fans giving up their places in the line for new livers, while their eyeballs turn yellow and their flesh loses its tone and hangs like an old sweater. An old yellowed sweater.

I stand on the porch, thinking of a throng of dying, yellowing fans cheering Mantle, who is getting the treatment they are denied, treatment that will be futile, it turns out, because during the transplant surgery, his doctors will discover advanced cancer. I go back inside, where the announcers are still discussing the case, regular organ transplant experts, with their blow dried hair and shiny suits. My father catches my eye, and understands. “What can you do?” he says, not meaning for me to respond, and I sit down again. What can I do? I picture a nationwide campaign to find him a liver, television ads, impassioned pleas for another few years for an old man who is not famous or rich, who never had crowds on the edges of their seats watching a long fly ball, going, going, gone, six hundred feet, seven, some people say. Mantle hit both righty and lefty, and it was estimated geometrically that one of his homers would have gone 734 feet, had it not hit the stands in Yankee Stadium. “You could at least take your vitamins,” I say.

With his hand, he bats my suggestion aside, like a gnat. He is more ready to die than I am to lose him, and I don’t want to fight about it. Instead, I think baseball is stupid, I resent the overpaid muscle heads who play it without any gratitude for their amazingly easy, healthy lives, I hate expensive, useless health insurance, care that is managed for profit, insurance company CEOs, and every heartless money grubbing bastard that ever walked the earth. My father is dying, goddamnit. Somebody do something.

It is 8:40 pm on a summer Saturday evening. Somewhere a baseball game is being played, but aside from visits to my father, I haven’t watched one in twenty-five years. The phone rings. It is my mother. She starts to tell me, and I say, I know. I tell her I will be there in the morning. I get up from the chair, look out the window at the warm evening, and turn on the television set, switching channels until I come to a game, any team will do. If I had a bottle of beer, I would have a drink. But I have something: I have iced tea. I pour a glass and raise it to my father as I watch the pitcher dispatch three batters and head back to his dugout, whacking his glove.

I never saw Mickey Mantle play live, but on tape, he is fast, he is so fast, he rounds the bases in thirteen seconds after blasting a home run over the wall. Crowds yell, cheer. Crowds fall out of the stands to get a better look at this marvel. He is the youngster in a club of greats, Ruth, Gehrig, DiMaggio, and he more than holds his own. Lucky you, I say to the pitcher on the screen, gesturing with my iced tea glass. You never came up against the likes of them.

I have a photo of my father taken when he was eighteen, in his navy uniform, the summer he enlisted. He is young and good looking, and I think, he could round the bases in thirteen seconds, why not? He stands with his brother, then seventeen and itching to join up, and his sister, twenty-two, and they are all so young. It is years before I will even meet them, but they have each other, and together, their expressions say, they can conquer the world. It is before his sister’s losses, before his brother’s death, before diabetes, hepatitis, prostate cancer, before anyone had even heard the words Pearl Harbor, where he would be stationed. In the photograph, it is summer, baseball season, and they are still at the time in their lives when there is not one strike against them. I love this photo.

A.M. Amodeo is a recovering baseball fan living in Woodstock, NY. She has written a novel, short stories, poetry and nonfiction. Her work has appeared and disappeared in local magazines.