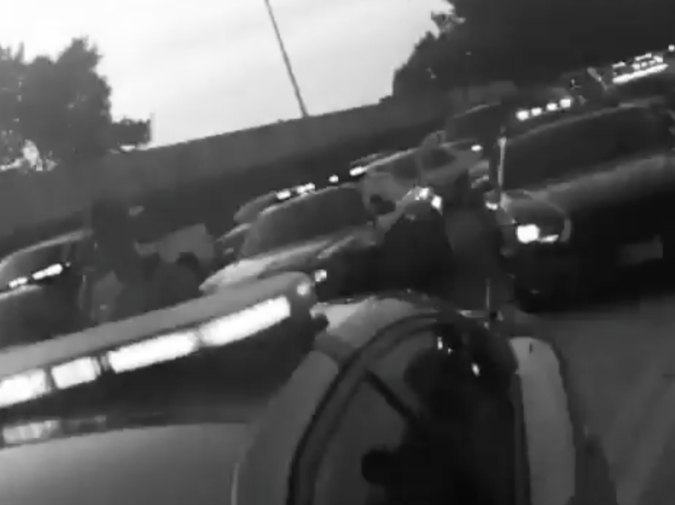 In July 2016, I participated in Atlanta protests sparked by the deaths of Alton Sterling and Philando Castile. Up to that point, protests had happened all over the country: Ferguson, New York, Baltimore, etc. I didn’t know what to expect when I decided I’d go. As the cameras of history rolled, I only wanted to take pride in my actions.

The NAACP spread the word to gather outside the Georgia Aquarium, in the heart of the city. My friends and I joined a crowd of more than 1,000 people. Most were black, but there were other races scattered around. We socialized and suddenly the crowd began to move. The march had commenced.

After the first block, I made my way to the front. There, you could see the organizers chanting through their bullhorns. You also faced the brunt of the city’s reactions. Drivers hurled cuss words and flashed their middle fingers. Shoppers and people eating outside looked aloof like they had entered a Wal-Mart and forgot what to buy. Then there were our supporters who echoed our chants from afar. Both reactions riled us up, helping us forget about the summer heat.

Sweat hung from my chin with despair until I wiped it away..  On our second roundabout, I learned there were other, smaller groups led by more organizers with bullhorns. However, they marched counterclockwise. Late in the afternoon, the groups united at the CNN Center. A few organizers spoke and then everyone dispersed.

Walking back to the aquarium, I noticed protesters drifting in the direction of I-75. I followed to notice a small crowd faced off with the police on the highway ramp. I joined. Eventually, the crowd grew to be massive, leaving protesters bleeding into the streets behind us. The police were positioned between us and the interstate. The media observed via helicopter.

“How could you stand with people who murder your own?” one protester yelled, specifically to the black officer in front of her.

The officer said nothing. His face didn’t change. In fact, the entire force remained silent with their hands on their weapons. Beyond the police, cars were stationary for miles. Our barricade stayed strong until nightfall.

At night, the city’s energy completely shifted. While we engaged with the police, the protesters behind us blocked the street intersection, very successfully, to the point a group of men stood atop an 18-wheeler holding up black power fists. On the ground, restless drivers took turns trying to run protesters over. The police began clearing the streets. (By 'clear,' I mean tase and arrest.)

Amidst the chaos, I separated from the people I came with and found some of the protesters I met earlier. We decided to march again, but instead of the city, we’d go through the nearby neighborhoods. Eventually, we stumbled upon another highway exit. We started blocking this one as well. However, the police interrupted before we could form. Again, by interrupt I mean tase and arrest. Our numbers dwindled and we could spot cop cars parked near every highway and major intersection all over the city. Whenever we cultivated, they’d simply call for backup.

We agreed to regroup at the aquarium. An organizer had been gathering members there for one last march through text and word of mouth

On this march, there wasn’t much chanting. The people were too angry to chant. We took a certain route to evade the police and reached a strip of stores. Then soon, behind me, I heard a window shatter. A man then shouted, “this is how I feed my family! “Allegedly, a few protesters looted from the man’s store. I was shamefully pleased when they shared their stolen goods with the rest of the group.

Past the strip of stores was a busy area of bars and restaurants. The bright streets allowed me to examine my fellow men and women. Our legs were hurt. Our voices were hoarse. We were all exhausted, so we decided to rest in the middle of the intersection. It’s all we could do. Quickly, the helicopters found us, somehow, after they had disappeared with the sun. From the TVs in the restaurants, we watched ourselves on the news.

“Go ahead and sit,” an elderly white woman with two children, maybe her grandkids, said as they walked out the restaurant behind me. There was one boy and one girl, both age 10 or younger. The little boy seemed petrified. The little girl looked confused. Neither sat on command.

“People are being treated unfairly because of the color of their skin,” the lady continued. “And sometimes they’re even killed. They’re sitting down to say they won’t accept that kind of treatment. So, sit. It’s the right thing to do.”

The three of them sat.

The police arrived soon after, but for some reason, they watched us from down the street. We sat still, waiting for another group who had also been marching to reach us. Once they did, we headed back to the aquarium together, where the march, at least for me, was over.

It’s June 2020 now, and the Atlanta streets are still full. It’s easy to say that history is repeating itself. However, for something to be repeated it must stop and start again. Anti-blackness has been rampant in the world — not just America — since the European colonization era began. Police brutality is simply a symptom of one of the world’s most deadly diseases.

Laws have always had loopholes. Black communities and schools have always been underdeveloped. Towns remain segregated. Pay has never been equal. The media and Hollywood rarely feel the need to release black stories without some type of trauma or crime or “first” attached to it; and as a result, black creators feel pressured to make those stories and that’s what the world continues to see. More black drama, more black hurt, more black tears and more black death. When’s the last time you saw or read a black story that was uplifting? Or a project that wasn’t released during an intense racial period? Or black history month?

All of this and more contribute to the world’s ongoing anti-blackness. A donation, a new law, a Twitter post, a march, while I believe can all be used to ignite change, will do little in the grand scheme of the world and its systematic anti-blackness. The only way to truly change the world is to destroy that system and rebuild it from scratch. If there is no radical reform for basic civil rights from the world’s most powerful leaders, history shows that the civilians will eventually take that responsibility upon themselves. So, I pose this question to the world: is your anti-blackness worth the destruction it will cause? Look around. We’re closer now than ever, at least in my lifetime, to being on that brink.

A journalism graduate from Kennesaw State University, Tyhi Conley's work has appeared or forthcoming in Atlanta Magazine, The AJC, Wine Enthusiast Magazine, Writers Resist and Halfway Down the Stairs.

image: The interstate, courtesy of the author