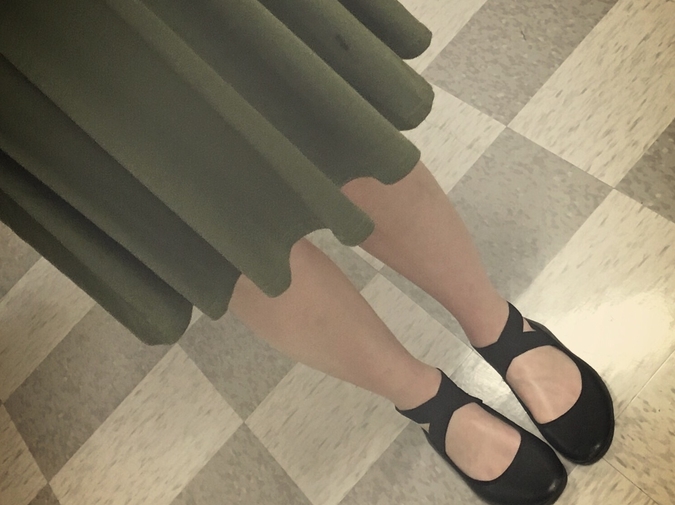 I’ll never know why Janet Wellington, a fellow graduate student, looked down at her shoes when she passed me in the English Department hallway. We never argued, never took the same class, never even had a one-on-one conversation. During orientation, new students introduced themselves, and Janet, who had short red hair, pasty skin and a small turned-up nose, blinked a few times before telling us she grew up on a farm in Michigan, the working-class daughter of a dairy farmer.

It’s not like she looked at her shoes when others passed. Just to prove it, I walked through the hallway with a friend, until Janet walked towards us. She said hi to my friend but stared down at her Doc Martens instead of acknowledging me. My friend laughed, said, “Oh my gosh! She really does look at her shoes when she passes you!” Although I laughed too, it bothered me, made me feel invisible. A feeling so familiar.

In junior high and high school, I never raised my hand, never said a word in class, not if I didn’t have to. I walked through halls as if I were a ghost, floating from one class to the next, sitting alone at lunch, staring at the ticking clock, waiting for that last bell to ring. Teachers ignored me, but one day, my eighth grade algebra teacher called my name when I nodded off: “Lori Horvitz. Wake up!”

I spent most of my childhood in a hot pink bedroom, alone, every so often staring in the mirror, until my eyes watered, until I saw a spooky medusa face. When I blinked I came back to myself--a shy, long-faced teenager with a mouthful of braces. I recorded myself, pretending to be a famous person interviewed by a talk-show host. Maybe this is why I took up photography and often set the self-timer and ran in front of the camera. I needed to see myself, hear myself, acknowledge myself.

I begged for my mother’s attention, but instead, she looked at the television, or hummed Hebrew songs to the family poodle, or gossiped on the phone with her friends. Once I left home for college, I gave up trying to get her attention. Now, I found friends, felt seen, acknowledged. I dreaded going back home.

When I was twenty-five, my mother lost her life in a car accident.

“Why do you think,” my therapist said, “Janet’s behavior affects you to that extent?”

“She makes me feel invisible,” I said.

“How is it not about me?” I said, waving my hands.

“Janet doesn’t know you,” she said. “Perhaps you represent something she’s threatened by. It doesn’t even matter. Your reaction is what matters. You’re giving her power.”

Two years into graduate school, the pattern with Janet continued. I had to do something, so I forced out a “hello” when we passed in the hallway. She’d lift her head marginally, still not making eye contact, but looked in my direction, grumbled a hello, and stared back at her shoes. If this were a power struggle, maybe I made headway.

A friend speculated Janet had a crush on me. Why else would she not make eye contact? Even though she wore khakis and white button-down shirts and could pass for an angry nun, or at least a serious academic lesbian, she often mentioned her heterosexual status. “Janet doesn’t have a problem,” my friend said, “appropriating lesbian attire, does she?”

One evening I threw a party for grad school friends and made sure to invite a new student, Tim--a frail, curly-haired guy who wore thick glasses and mumbled. I didn’t invite Janet, not out of spite, but because she never made the effort to look at me. Nonetheless, she showed up, put two Heinekens in my refrigerator, as if she belonged in my house. She talked and laughed with Jim, all the while combing fingers through her hair. They soon began to date.

During our last year of grad school, Janet and I had to share an office.

Now was my chance to probe why she refused to acknowledge me. But I didn’t know how or when to ask. Like two cats living in the same house but ignoring each other, for a full semester, we sat back to back, our desks facing opposite walls, where we met students and never exchanged a word.

Not until June, the last time I saw her. We found ourselves sharing a lane in the YMCA pool, standing side by side, taking a break. Maybe there was something about the water that made it impossible to look down. She took off her goggles and focused on my shoulder. “Did you know,” she said, “it takes two weeks to get an appointment at Planned Parenthood?”

“Really?” I said, not sure why she was telling me this.

“Maybe you can go somewhere else,” I said, “if you need to see a doctor sooner.”

“Two weeks is a long time, isn’t it?” she said. She put her goggles on and disappeared under the water.

Did she only want to tell me about her need for birth control, that she was having sex?

Maybe it’s okay not to know.

What I do know: Janet Wellington made eye contact with me in the YMCA pool. I also never had a chance to look my mother in the eye and say goodbye.

Now I slunk my body back into the pool and swam a few feet behind Janet Wellington, her bare feet kicking up and down, splashing me in the face, so I slowed down and let her pull two body lengths ahead.

Lori Horvitz’ personal essays have appeared in a variety of journals and anthologies including Epiphany, Redivider, Chattahoochee Review, The Guardian, South Dakota Review, Southeast Review, Entropy, and Hotel Amerika. Professor of English at UNC Asheville, Horvitz is the author of the memoir-essay collection, The Girls of Usually (Truman State UP).