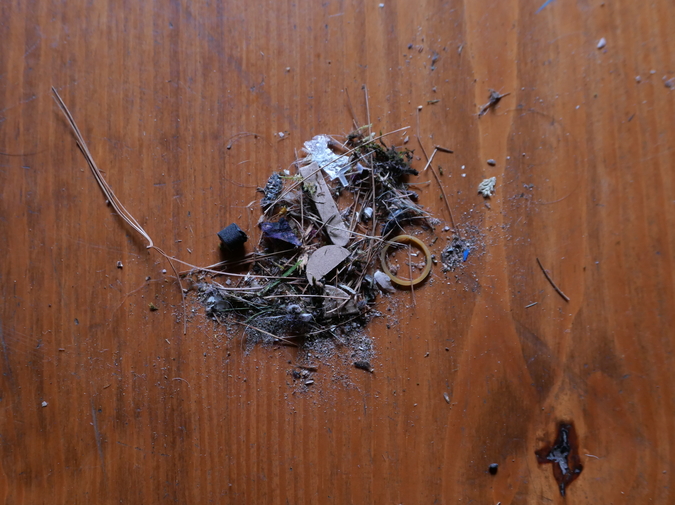 I saw Maeve standing by the smoked nut stand. Her hair was flying in the wind. She was standing on the subway grate, letting those blasts blow at her, too. That seemed a little much. There was trash down there, and spit and shit. But she’d always self-aggrandized, put herself in good spots at great cost. Now she looked good in the two kinds of air. “You look healthy,” she said. The nut-stand guy leaned on his cart, eyeing a pigeon like he knew him.

College was almost two decades ago. “Maeve?” I said. I was uptown to get my shoes repaired, and I held them in my hands. Otherwise I might have hugged her. She’d never been able to hide the movements of her eyes, their little judgments.

“I’m a writer now,” I said, though I wasn’t really. We didn’t do pleasantries, or go into details, and that felt mature; we were proud of that. She followed me into the cobbler’s. The resiny zing of wax and spray hit us, and she sniffed. She had a great nose. She told me about the movie she was trying to make.

Oscar came out of the back. “What did you do?” he said, picking up the shoes.

“What did you do in them?” He was horrified.

Maeve kept talking. Her movie was about modern bohemians who believe an artistic revolution is due. They decide to freeze themselves. They try to draft a detailed document stating the conditions society must reach to warrant a thaw. Will it be arid and brittle, poetry readings in dusty caves? Or wet and wild, hair plastered to brows as future-people stumble and grope across the heath, across many heaths? The future might be mostly heaths. One bohemian works on the document for years, for the rest of her life. Or she freezes to death in a walk-in. Maeve said she would title it Thaw. Maybe Perishable. She had some decisions to make. “What do you think?”

That’s a movie? I thought. “Things will get better?” I asked. “In the future?”

“For some,” she said. “They’re called optimists.”

Oscar tapped my shoe on his counter. “I’ll say: it doesn’t sound good.”

“No one’s speaking to you.”

“I hold opinions. I have rights.”

I paid Oscar. “Just do the shoes. That’s enough.”

Suddenly she was interested in him. “And there’s the matter of casting.”

“My opinions, my rights.” said Oscar, racking the shoes. “And my values.”

She wanted to put Oscar’s big head—his wet lips, his baggy eyes—into her film. She wanted the world to see that face. One day it would. It would know his name, too. But for now I felt those were my wet lips, my eyes.

Outside the shop, she turned to me. “I’ve never heard you talk like that.”

“The way you talked to Oscar. I’m seeing you so differently.”

“My father gave me those shoes.”

“He was from Indiana.”

“All the things you must ask for and get. Does the city open itself up to you?”

She nodded. “You were always like that. Remember? You stood in the corner at parties. Do you remember those corners? You wanted to add to the conversation. I know. A little addendum. Tender your opinions. But you kept yourself buttoned. I know because I saw. Your tight collars, your hair in your eyes. Where did you keep it all?”

“Should we get some nuts?”

We sat on a bench and ate our nuts, the wind tearing at our paper pouches, our hair, our collars. I was pretty sure I had gum on my ass. I thought of those days. I didn’t want to say anything, but I didn’t want to keep being seen as the same.

“There!” she said, chewing. “The same! Just like that! That’s how I pictured you. That’s how I remember you now: sitting, licking your little lips, looking down and in.”

All I was doing was sitting still and being quiet. I’d always been able to do that. I never had to do any timely opining.

But Maeve had to. In the old days, she’d rise up; she’d squint and deliver her tastes and hatreds. Sip back her beer, show off the pale length of her throat. Things got quiet, drowned around her for a minute. She said her piece and receded. She’d win the room with her views, move a man to rue his pre-plated vagaries. He’d question it all: his meager goatee, the norms he hadn’t ravaged. Maeve performed. She lacked the imagination to hold court inside herself, silently. I had that inner chamber. That extra valve for discrete opinion.

Then I remembered that she wrote movies. She’d written Thaw, or Perishable, not to mention Honk If…, Crutch, and Stubble John. Four movies said she had imagination, and could hold court anywhere, outside or in. It hurt to discover that just then, watching her eat smoked pecans. I wrote scripts for a dating website. I was nearing forty, thoroughly bored by my shortcomings. “I think about you often,” I said. “Like this, but off in other modes, too.”

But the way she ate each pecan delivered a message: Don’t picture my other modes. She’d never paid such attention to her food. Studying her nuts was a diversion, a discouragement.

We’d almost slept together once. One November night of our sophomore year, a bank of warm air had come up the coast, the offshoot of a southern storm. The wind broke windows, downed power lines, tossed boats into trees. Falling branches pinned and killed a pair of lovers in the park. A group of us spent the storm in a dorm-suite, watching one guy’s favorite film. Something about a singer turned to gunslinging, or vice versa. We wanted to be the lovers who lived. Blankets and pillows on the floor. Sweet and human smells, hovering blue fumes. Sirens outside; the room had a red throb, a raw edge.

Maeve and I were under a twin bed. I was grateful for a friend, but we began to kiss. When I touched her nose, I couldn’t say why. I just touched it. She tolerated poetic action, so my finger stroked it, stem to stern. My thumb brushed around the nasal wings, tested the septum. I was young. I was overcome.

We were rolling in dust, and damaged someone’s stuff: box fan, plastic tub of summer things. A whiffle bat rolled beneath me, and I felt seasick. The bed squeaked above. We heard the wet and muscled movements of mouths: they were looting each other, tongues attacking. Across the room, parts were meeting, tooling around. A zipper roared in the dark, and someone sighed. I smelled luggage. Maeve's cold arms moved; she had circulation issues, or B12 deficiency. I choked on a feather. Fingers raked my hair. We kissed again.

Later that night, Maeve and I left, got pie at the diner, or beers at the bar. I don’t remember which. But we stood at the decisive corner. “Which would you prefer?” she said. How do you talk about the meaning of things? I known when a memory is made. When it has the heft and edge to etch itself permanently. She was part of that now, I’d told myself. The story I told in my head. We got pie.

I had things to say then, but I was out of them now. But the more we sat on the bench, the more I amended, inflated, my past feelings. The wind put these thoughts in my ears. The nuts were sweet.

When we finished them, she wanted a confession. “Those weren’t good,” she said. “They smell better than they taste—that’s well known. What do you think?”

She wanted me to say I regretted keeping it all to myself. She wanted more about the shoes, my father. She’d turn that into something, get all the little details down. But it wasn’t up to her. My shoes would be ready soon. My shoes.

Still, I told her what I thought. The nuts, a mistake. But hadn’t they given us something to eat outdoors? Some flavors on a nice day? There was nothing more worthless than really good food asking for attention, getting itself talked about. Like Oscar I had plenty of views. The nuts had brought a pleasant pressure from the past. A memory can lodge in your throat like a stone, an unhusked drupe. It was painful but it was right. You cough it up or you swallow it down for good.

She smiled. “A drupe?” She was disappointed. She missed my delicate movements in evasion, my poor showing in the need-to-please department. The day meant less to her now, and so did her memory of me. And so did I. She balled her paper pouch into her fist. A dollop of pigeon shit hit the bench. If we sat here long enough, holding our trash, one of us would leave.

She was wrong, too: I was desperate to please. I knew that much. My silence—people liked that. She shifted her weight like she was going to go.

No, I thought. I wanted to see her as she’d been, just minutes ago. Could I ask her to return to the grate? Ask her hair to flap like a flag again? A flying kite, a flame? Where did the pigeon go? The air is smoke and honey. A local train whines in its vein. There she is: Maeve waits for me to say the sun is such a, the wind is so and so, her hair has never, the spray of buds? comedically green. The pear trees are in bloom. She’s about to smile. She’s smiling. They’re pear trees, aren’t they? I think so. She waits to hear how good it is to see her.

Walker Rutter-Bowman lives in Washington, DC. He earned his MFA in fiction from Syracuse University. His work has been published in Nashville Review, Tin House Online, Harvard Review Online, and Full Stop.