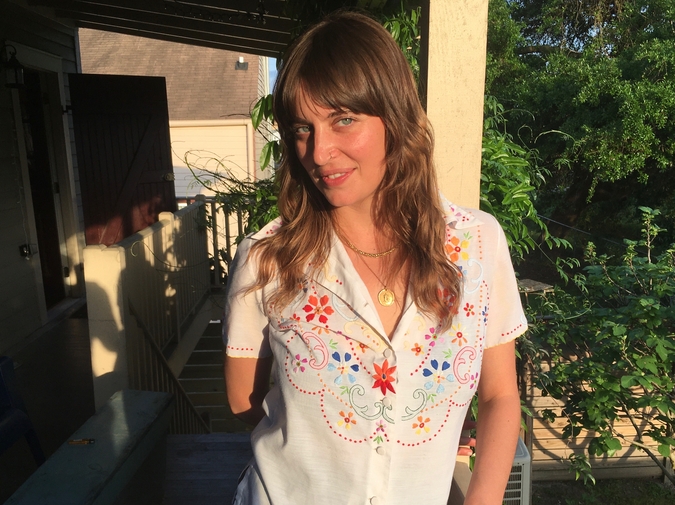 I get to the dentist early in hopes they will be able to see me sooner than my scheduled appointment time. The office is on St. Claude Avenue, a busy street in New Orleans that separates the gentrified Bywater neighborhood from the Upper 9th Ward, though realtors or Craigslist ads might tell you the Upper 9th Ward is actually ‘The New Bywater.’

I lived on Bartholomew Street in the Upper 9th Ward my first year in New Orleans. There was a heroin problem and that summer a van was driving around kidnapping women on bicycles. We were supposed to be extra careful. One night, someone rang my neighbor’s doorbell. They shot him in the face when he answered.  Another neighbor was raped in her backyard by a stranger who held a gun to her head while she sucked him off. She moved away after that.

I moved to Central City when my lease was up. Not because Central City is any safer. I didn’t leave because I didn’t like living in the 9th Ward. I left because I was in love with a man who said he would live with me, just not in the 9th Ward. He told me it was too far from his shop, Uptown, where he built fancy furniture out of reclaimed wood and sold it, if you ask me, for too much money.

We lived on Josephine Street. Our house was between two Vietnam vets: Mr. Robert and Mr. Leonard. Most days, they sat outside on their stoops getting drunk off Busch beer, tossing the empty cans out into the street, because who cares. They are grown men. Let them throw their beer cans out in the street if they want to.

Fish lived two doors down, had really long dreadlocks, and rode a mini BMX bike. He lived with his older brother who was also a Vietnam vet. I never met Fish’s brother. He never came out of the house. We heard he came back from the war different. I think he was agoraphobic. Fish asked me where I moved from. I told him the 9th Ward. He replied:

You just moved from the frying pan to the skillet.

I sign in with the lady at the front desk. She asks if I have any insurance. Why yes I do have insurance. I show her my Medicaid card. I am excited to show her. I haven’t had any kind of health insurance for the past five years. Ever since I got this magic card in the mail I have been calling doctors and scheduling appointments. Today is Dentist Doctor. Next week is Gynecologist Doctor.

The last time I went to Gynecologist Doctor I was twenty-five. I was convinced I had breast cancer because in the shower I thought I felt something. On a trip to visit my mother in California she recommended, I see her ‘guy.’ She kept saying: you should really go see my guy and have him look at you. So, I received a breast check from my mom’s guy, a very large man who kept knocking me in the face with his belly and apologizing as he felt me up. I could not stop laughing. I am ticklish. At the end he said:

The lady at the front desk passes me some extra paper work I need to fill out before Dentist Doctor can see me. I take a seat next to a box of tissue paper and a stack of magazines. There is a flat screen T.V. hanging on the wall in front of me that keeps playing the same AAA commercial over and over. The paperwork wants to know if I am allergic to any medication. I am not. Do you smoke? If so, when was your last cigarette? How many drinks would you say you have in a week? The paperwork wants to know. I lie. Of course I don’t smoke. And I only have one glass of wine a week, if that. I finish the paperwork’s questions and bring it back to the lady. I ask her how long it will be until Dentist Doctor can see me. She says:

I sit back down next to the box of tissue paper and magazines and watch the AAA commercials. Thank god Darcy had AAA. She accidentally locked her two-year-old daughter in the car with the keys and no AC. AAA was there in less than two minutes to unlock the car door. If it weren’t for AAA, Darcy would probably be in prison. You want to know what happens in prison to people who killed their kids? Bad, bad stuff happens to them.

The front door to the dentist office swings open and a guy dressed in sweatpants and a Saints football jersey pops his head inside and asks: Ya’ll take walk-ins? Or do I need to make an appointment? The lady at the front desk tells him walk-ins are welcome. He says:

Awesome. I’ll come back and make an appointment later, but for now can I use your bathroom?

In the first month of living on Josephine Street, someone was shot outside my front door. Nobody died. They just got popped in the leg a little bit by a passing car. Once when I was unlocking my front door, a red Toyota truck pulled up in front of my house. The guy behind the wheel said: Hey you! I turned to look over at the truck. The guy opened his door to show me his erect penis while he jerked it off. I stared at him for a second before I realized what was happening. Then I yelled:

Hey you! Fuck off!

Maybe dreams come true after all. Or I really do have psychic powers.

Recently, I was flossing and a tooth fell out of my mouth. My top back molar, the one where I had a root canal done ten years ago. I was still on my parents’ health insurance. Back then, Dentist Doctor said I probably had about ten years until I would have to get the tooth removed or the crown replaced. Everything is on schedule and what better timing to have a tooth fall out then right when my Medicaid kicks in. I am so blessed.

The lady at the front desk tells the man in the Saints jersey the restroom is for patients only. The man says: Fuck you, bitch, and slams the door. I guess he won’t be coming back to make an appointment at Louisiana Dental anytime soon.

I like Louisiana Dental because their slogan is: “We Cater to Cowards.” I feel safe. Finally, the other door, the good door, the door that leads to the room where Dentist Doctor hangs out, opens and a lady in scrubs calls my name. I jump up and follow her. She brings me down a hallway into a room with a big reclined, tan leather chair. She tells me I can have a seat and Dentist Doctor will be with me shortly.

In this room there is another T.V. On this T.V. the news is playing. The world does not seem okay. I wonder if there is another channel we can put on. One with soothing sounds and scenes from nature.

Dentist Doctor comes into the room and I consider asking her to change the channel. I really don’t want to look at CNN while she looks inside my mouth. She tells me to open my mouth. I close my eyes and open wide. She pokes around for a few moments and says:

I can either pull the remainder of this tooth out today or you can come back another day. Either way, it’s got to go.

I ask how much it costs to have a tooth removed. She tells me extraction is covered with my insurance.

Thirty minutes later, I am leaving the dentist high, with a mouth full of bloody cotton, and a prescription for oxycontin. I get a discount with my magic Medicaid card.

I have now been prescribed oxycontin three times in my life:

I had to pee all the time, but when I would sit on the toilet nothing would happen. I’d push and push and only be able to squeeze out a few droplets of urine. It burned like hell. After a day, my back started to hurt so I went to the Urgent Care. It’s on St. Claude a few blocks down from Louisiana Dental. Urgent Care Doctor talked like a cowboy. He said:

Well, little lady, looks here like you got yourself a mighty kidney infection.

I sat on my couch for twenty-four hours popping oxycontin while I watched a full season of Gilmore Girls. Lorelai and Rory were not on speaking terms and I missed my mom.

The furniture-building boyfriend knocked me up. I kept the bottle of oxy in my medicine cabinet. I considered killing myself and taking all the pills. I was having a bad day. I went to look for the pills in the cabinet and only found an empty bottle. My roommate had been sneaking them. I’m too lazy to come up with a better way to kill myself. Thanks, shitty roommate.

I take ibuprofen, drink lots of water, and crawl into bed. I’m too afraid to fill the prescription, but I keep it in my purse just in case.

Mik Grantham is the founder and co-editor of Disorder Press which she runs with her brother. Her work has appeared in Maudlin House, The Nervous Breakdown, and Fanzine. Her poetry collection HARDCORE will be published by SF/LD Books in early 2021. She lives in New Orleans.