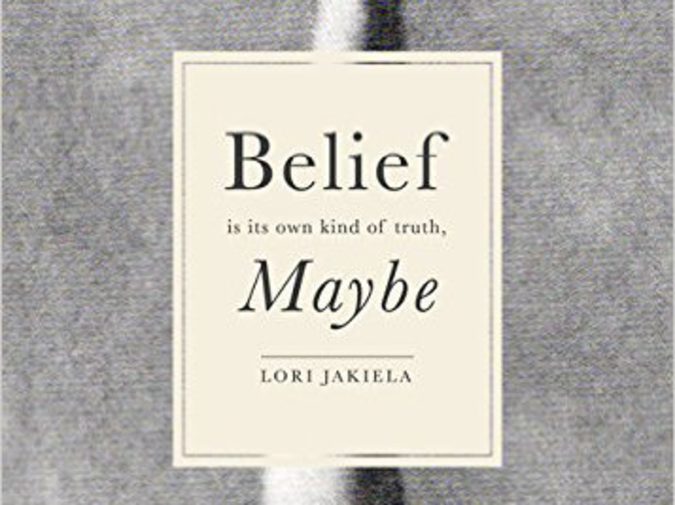 In her third memoir, Belief is its own kind of truth, Maybe, Lori Jakiela uses a collage-style structure to write about the collage-like process of assembling an identity, and the particular challenges in doing so for an adopted child. The book is drawn forward by the narrative of Jakiela's first contact with her biological family, but at every step, Jakiela pauses to include the experiences that happen in the background of any narrative; of being a daughter and wife, of parenting, of writing, of teaching, and just of freezing in mid-step to entertain an unresolvable doubt as to whether one is a good or bad person. The result is a work of jarring emotional power and bracing intelligence. Our conversation took place via email.

In writing memoir, it's always challenging to impose a form on real life, which doesn't tend to observe rules of dramatic structure, or to provide neat endings. Could you comment on how you found a structure for Belief…?

Because Belief is, in part, an adoption memoir, there were many pieces of the story that were missing or didn’t fit or didn’t add up to something I could plot. All lives are like that, of course, but maybe with adopted people a little more so. There were a lot of holes and back-alleys in my life story.

So I fumbled around a lot.

I was interested in vignettes because I thought maybe a fragmented style might be right for an adoption story, but I wanted to figure out how to write a fragmented story that might keep the reader reading, too. Every draft I wrote was coming out in strings. That surprised me and made me want to figure out what was happening. I tried to pull those strings together into something a person who’s not me might want to connect with and read. I don’t know if desire can create structure, but I hope it did.

How do you negotiate writing about people when you know they're likely to read what you've written, and possibly have a bad reaction (especially in the light of the previous bad reactions on the part of your biological sister and mother, as described in the book)?

Years ago, when I was working as a journalist, I interviewed this sweet old couple. They’d been married over 50 years. He was a World War II veteran. She stayed home and raised their kids, crocheted, and volunteered at the church bingo. These were Norman Rockwell’s people. They invited me to their house. They were sweet and funny, open and kind. Their house was full of family photos and antiques, afghans and doilies. The man swore a bit and his wife said “lord, this man.” They gave me tea and sugar cookies from a fancy tin. I went back and wrote the story. We ran a big picture of the two of them holding hands. I felt pretty good about it.

The day the story ran, I got a call in the newsroom. It was the wife. She was screaming and I had to pull the phone back. I tried to figure out what I’d done to make her so upset. I’d printed that her husband swore? I didn’t know. There was a line in the story where I described their living room. I’d written:  “In a room filled with family photos and dusty antiques.”

She said, “There is no dust in my house.”

I was 22 years old. I didn’t know dust meant anything. I tried to figure out how to run a correction, how to make the woman feel better. “There is no dust in Mrs. X’s house. The Times regrets the error.”

But there was dust.

In writing Belief, it was important to break silence. An adopted person is always someone else’s secret. It’s hard to live like that, especially for a writer.

The great writer Harry Crews said something like it’s the writer’s job to “write a book that will knock everybody’s dick in the dirt.”

When I’m writing, I take every risk I can to make the world line up and I try not to give two fucks about it. I give some fucks though, later, in revision. I try to negotiate that. I take out what I don’t need for the story. I leave in what I have to leave in. I try to make peace with that.

There are sections where you break into fiction and allow yourself to speculate about events you didn't witness. What effect were you hoping to create with this?

I based the fictional section on facts I knew and on some stories I’d heard. I had my adoption records – which are redacted, kind of like something delivered by the CIA—which have these moving narratives written by the social workers who worked with both my birth mother and my parents during my adoption.

My experiences with my birth mother were one-dimensional. She was angry and cruel and if I wrote the person I experienced, she’d come across as a monster and I know that’s not true. Even though I didn’t witness it firsthand, I believe there had to be more to her.

Traditional creative nonfiction would leave me room to speculate – maybe it went like this, maybe it went like that – but I wanted to get closer. It’s strange to think of fiction as more intimate and more real than nonfiction, but Hemingway talked about that a lot. Maybe I needed to forgive my birth mother, even though she wouldn’t want or need my forgiveness, and maybe I needed to forgive myself, too. The fictional sections allow me to come closer to doing that.

In a lot of ways, this book is not about finding a mother, but about losing your adoptive mother and father. Do you see memoir as a way of preserving people and memories for yourself, as well as a way of communicating with an audience?

I always want to communicate with readers. I wouldn’t publish if I didn’t. When I write about my mother and father, I feel them in a way that can be both comforting and painful. They’re not lost. They’re lost. They’re here and gone, all at once. I think maybe memory is like that for a lot of people. I hope so, anyway. I feel like time is a construct, to use bad literary terms. I feel like the past is never past, that everything we’ve lived is present, always. It’s philosophically convoluted, maybe. But mostly I don’t believe in time as a linear thing. I think we are our pasts and our presents and our futures all at once, and that the challenge for writers is to capture that, maybe.

A slightly off-the-wall question… a lot of this book is concerned with motherhood, and being a “good mother”. Do you think writing has any similarities to parenting?

Parenting and writing both demand patience and a no-bullshit approach to things. Writing is hard. Parenting is harder. There is no writing equivalent to diapers and juice boxes and night terrors. I’m pretty sure of that.

A non-literary question: Do you think all adopted children struggle with identity?

This is your third memoir. What keeps bringing you back to memoir as a genre?

Memoir, more than fiction, so far anyway (though I’m working on a novel now), has helped me make sense of things in my life. I like the way memoir lets me slow down experience and examine it. I like the way it gives at least the illusion that, if I push hard enough and look close enough, I can find some order there.

Is there a question you've always wanted to be asked?

What’s it like to wake up every morning and be a person and a wife and a mother and a writer and a teacher and be terrified and eat a bagel and drink five cups of coffee instead of thinking about all that?

I don’t have the answer. I wish someone did.

Lori Jakiela is the author of the memoirs Belief Is Its Own Kind of Truth, Maybe (Atticus Books 2015), The Bridge to Take When Things Get Serious (C&R Press 2013), and Miss New York Has Everything (Hatchette 2006), as well as a poetry collection -- Spot the Terrorist! (Turning Point 2012). She has been published in The New York Times, The Washington Post, The Chicago Tribune, The Pittsburgh Post-Gazette, Hobart, The Rumpus, Vol 1 Brooklyn and more. She lives in Pittsburgh with her husband, the writer Dave Newman, and their two children. Her author website is http://lorijakiela.net and she blogs a bit at http://ljwritesbooks.com.

Sandra Newman is the author of seven books, including The Country of Ice Cream Star and How Not to Write a Novel. She tweets at @sannewman.