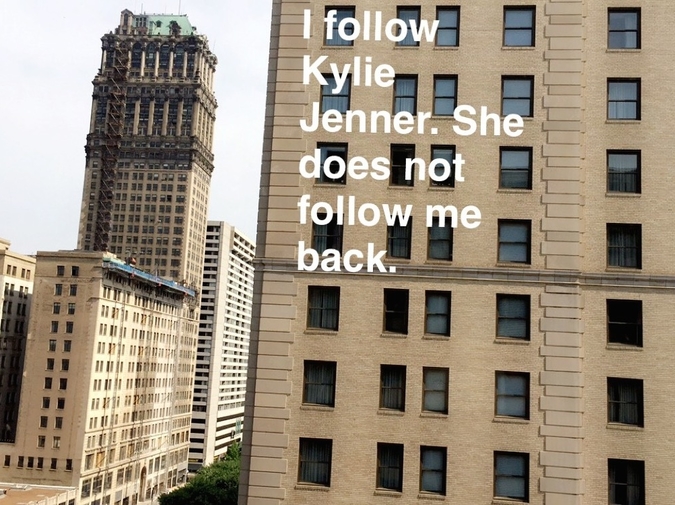 A girl on my train is watching Kylie Jenner’s snapchat. I lean in and watch over her shoulder. I can't hear, but it doesn't really matter. Kylie shakes out her shiny black hair and pouts her lips at the camera. She uses a filter that makes her eyes big and sparkly, like an anime girl turned flesh. I wonder what my eyes would look like with that filter, behind my round glasses. Kylie already moved on; her camera slides over a parking lot of luxury cars, landing on a matte black Range Rover. The caption reads "today's ride." I glance out the window and realize I've missed my train stop.

I’m shocked at how quickly Kylie Jenner integrates into my life—the way she slips so seamlessly into my G-Chats and dinner conversations. I watch her Snapchats in minute-long bursts in my bed in the morning, on the toilet at work, sprawled across my couch when I get home from my hour-long commute. It’s so easy to tune in and out. It hardly takes any effort at all. Kylie buys a new elevator for her mansion. Kylie tries new glam. Kylie goes to Coachella. Kylie orders matzo ball soup. I’m there for all of it.

I think that Kylie is my friend. I know, realistically, that this isn't true. But when I see her face on the internet or magazine covers or TV, I react like she is someone I know well, and I feel happy to see her.

My desk is contained within half an octagon so unless someone comes up behind me, I can take selfies in peace. A Snapchat filter gives me the snout and ears of a dog. I look pretty good. A Wendy's-sponsored filter makes it look like I'm taking a bite of a spicy chicken sandwich, and then my face gets bright red and my eyes fill with tears. I really ham that one up. Another filter makes my head look like a strawberry, and when I open my mouth it vomits out smaller strawberries. I send it to my roommate, Paige, without commentary. She doesn’t respond.

Kylie has 30 million followers on Snapchat, which makes her the number one most-watched person on the app. Her username is King Kylie, and a crown emoji appears next to her name.

Kylie Kristen Jenner was born on August 10, 1997. When the pilot of Keeping Up With the Kardashians aired in 2007, she was 10 years old. Wikipedia lists her occupation as reality television personality, socialite and model, but she does so much more. In 2013, she released two nail polish colors for OPI called “Wear Something Spar-kylie” and “Rainbow in the S-kylie.” In 2014, Kylie and her sister Kendall quote-unquote co-authored the dystopian science fiction book “Rebels: City of Indra, The Story of Lex and Livia.” The sisters also sell clothing lines with Pac Sun and Topshop. Both collections are called ‘Kendall and Kylie,” but one has an ampersand and one has a plus sign so you can tell them apart.

In 2015, Kylie admitted to using lip fillers, and then she launched her Kylie Cosmetics line. In February of that year, she bought a $2.7 million five-bedroom mansion in Calabasas. She was 18 years old.

I left Snapchat for almost a year. Then I saw a video of Kylie on Twitter. In it, her hair is blue and her eyes are dead. She's walking somewhere, filming herself with the camera angled from below. "I love to snap," she says, voice flat. "It's one of my hobbies, and it's definitely one of my talents." I watched it over and over. Something exciting was happening here.

Kylie’s hair changes day to day, from pink to black to teal. She’s always in flawless makeup, with thick eyebrows and unnaturally smooth skin, even if she’s just laying on her couch with her two mini greyhounds. She looks like bad CGI. She looks beautiful.

Kylie posts a video holding a cupcake. She brings the frosting up to her mouth. She parts her lips. She’s about to take a bite and the video ends.

“I call bullshit,” I say to Paige that evening. “She didn’t eat that cupcake.”

On March 31, 2016, Kylie releases a music video for her lip gloss. In the three-minute narrative, Kylie’s hot friends pick up bags and bags of cash from some dudes at an abandoned motel. Then they beat the dudes up. Kylie waits outside in the getaway convertible, listening to the radio and eating a red sucker. She wears a Louis Vuitton headscarf. Her new lip glosses are called Like, Literally and So Cute.

The next day, I go to my friend Mark’s so we can watch the video on his big screen TV. “My roommate says Kylie is New Media,” he says.

Kylie films shards of glass broken against her kitchen floor, set to a hip-hop song playing over her phone. She captions it, “VIBES.” The next day, I film two pigeons fighting over a French fry in the rain. I caption it “VIBES.”

I watch a teen girl Snapchatting on the Brown Line. She takes a blurry pic out the window, sends it, takes a pic, sends it, takes another. Her fingers move fast. She sends 20 identical Snapchats in 30 seconds. Snapchat has a point system only understood by teenagers. It has to do with how many Snaps you send, and how many you receive in return. She snaps, sends, snaps, sends. Watching her exhausts me.

Kylie has two best friends named Jordyn and Harry. They’re always flopped across her couches or lounging by her swimming pool. Jordyn is a plus-sized model, and Harry is a musician with finger tattoos, and it seems like they live with her but it’s never really clarified. They make her laugh a lot. I like them both.

There's a problem with Kylie's lip gloss. A famous makeup artist says the brushes are no  good. Kylie goes missing from Snapchat for a day. I miss her. The next day, she comes back.

Kylie shows up on her brother Rob's snap story. He films her as she takes selfies in a bathroom mirror. "Hey, hey," he says as she continues to snap pictures, unmoving. "Yo, hey, you!" he says, stepping closer, getting louder. She finally turns, eyes wide, looking like someone who was just startled awake.

It’s production week at the magazine where I work. I stay late and bite my bottom lip until it bruises. I ride the train home, climb three flights of stairs and collapse on my couch. I pull out my phone. It looks like Kylie had a good day.

Kylie breaks up with her boyfriend and then she posts videos from her childhood bedroom at her mom Kris Jenner’s mansion. She walks through the empty house and starts answering Twitter questions from inside the pantry. She eats BBQ Lays potato chips.

“Kylie Jenner is who you see on Instagram, but I am not Kylie Jenner,” she says. “I don’t know who Kylie Jenner is.” Then she posts a black screen with a hashtag floating in the middle: #whoiskyliejenner.

It’s unclear if this is a teenager having a breakup-induced existential crisis or a plot point for the next season of Keeping Up With the Kardashians. Maybe it can be both. Can you really begrudge a teenage girl for turning to her 30-million followers in a moment of strife? I wonder if, in 2016, we need to readjust our ideas about authenticity. #Whoisanyone, you know?

Later that night, friends come over to eat dinner on our back porch. The talk turns to Kylie. Did we all see #whoiskyliejenner? We did. We loved it. Paige stares over her wine glass to the tree in the courtyard. “I feel like I’ll always remember it,” she says.

On Thursday I go to Cat and Jane’s apartment and we drink $8 white wine.

"Have you guys watched Kylie's Snapchat?" I ask, and when they say no, I pull it up on my phone. I sit on the couch between them and we watch Kylie pout her lips at the camera angled above her, singing along to a Rihanna song in the passenger seat of a car. "It's kind of boring when she sings to the radio. Sometimes I skip those," I say.

"Don't skip them," Jane says in a hushed voice. We huddle over my phone. We watch them all.

Megan Kirby has written for Jezebel, Bitch Magazine, and The Chicago Tribune. She also publishes a few zines. You can find her on Twitter at @megankirb.