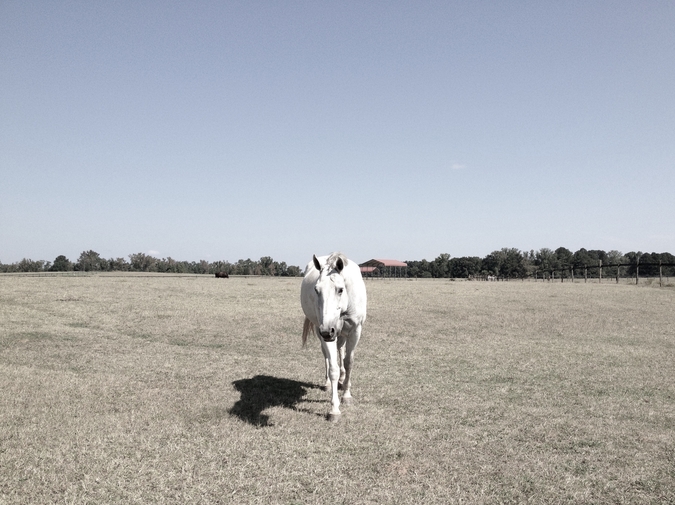 is what I should have said to the silent room that threatened to faint—
projector on, & the crystalline reader yelling to the back of the crowd

adulatory, incanting. Like any good knight I tell the necessary amount
& keep going. Or have you pitched into too & no way to know

who’s safe. I unlearn a family retelling. There’s the ritual—good—
& the nightmare, locked in. What thrives on repetition. The image

that came was of a single horse running, far afield of
any help or totem—not wounded, no pretty symbol,

just suddenly, in minor shadings, less there.
If this were paint it’d be asymptotic, red.

Then my legs, my hands went numb. I felt the familiar electric warning
of the near-unconscious, & shifted my weight, & pretended

into a shuttering off, a single long exposure, of one face, or none.
All eyes swiveled left & right along the walls. The fall lasted five,

ten minutes, imagined. The room, the rows of listeners, at attention.
The speaker: still intoning. Something’s wrong with me, I thought—

unsupported transit. A handicap reveals the gaps in locomotion.

& I pictured the lone shot from Muybridge’s gun, the bullet
arcing from 1860 to 1874, from the upturned stagecoach

to the mayor’s skull. By reason of insanity, sometimes forgiveness:
superimposition obscuring who’s safe to tell—how to move through

one point to another in trust of some unifying film. We stood, clapped.
We filed out. A not unsuccessful landing, considering the minutes

before, airborne at the trot, doubting the way back to ground.

E.G. Cunningham grew up in South Carolina, Italy, and Florida. Her work has recently appeared in or is forthcoming from RHINO, 111O, The Nation, La Vague, Quiddity, and other journals. She is a PhD candidate in English Literature and Creative Writing at the University of Georgia in Athens.