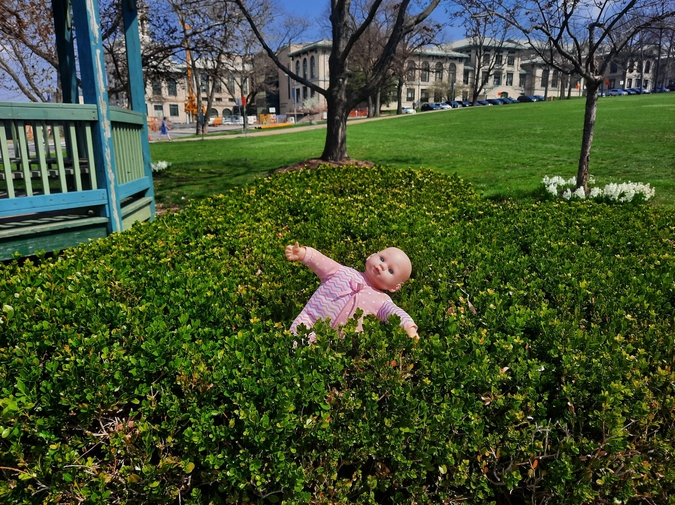 We learned that lightning is drawn to the homes of those who carry money too freely in their pockets, for example. A broken appliance is a sign that an important lie has been recently told. Spoiled food may indicate a promise that was never intended to be kept.

A power outage means a forgotten debt or promise. A tooth chipped on a spoon may coincide with fantasies of financial impropriety or fraud. There was no mystery to why we learned these things. Our parents told them to make the good times a little harder, or the hard times just a little bit worse. What is security but another opportunity to be creative in our fear.

My sister and I had trouble in school knowing that a child with double joints was conceived beyond the walls of the family home. A child whose rashes rise easily was conceived during business hours when work was left undone. The child who can hold their breath for unnaturally long will marry young and unhappily. A girl born with hair will only find her first love in a married man. A key whose owner has never thought darkly of a loved one will never break in a lock. Every smell a child gave off at a slumber party gave my mother some hint that misery was coming to their parents’ personal business.

Our school was shaped like a big letter H and so illnesses were frequent. A small tornado formed in the dust in front of us one winter as we drank deeply from our juice boxes. It threw holly branches into the faces of the young kids in prayer group. We knew some teachers must be having an affair. The building should have been shaped like an L or an A, my father said, should have faced north, where the wind would not ruin it. It was not where everything went truly wrong but we knew it was a start.

A videotape returned un-rewound will take with it forever a minor memory or routine joy. A videotape never returned will lead robbers to a loved one’s door, which is how Deborah ended up shot through the calf. Each new book never opened will keep the owner’s soul trapped an extra day below the earth before Christ turned his faucet and sent the souls where they would go.

My sister almost escaped but had to drop out of nursing school when her toenails grew inwards and got too infected to walk. My first wife loved another man before me. I drove to her boyfriend’s house when they were away seeing the leaves on semester break and I hid food to rot in the quiet space under his home. Under the fig tree I buried a set of plastic barbecue tongs, shining and toxic, the kind you can buy for less than a dollar.

I didn’t need to do much more. If you leave the  body of an animal unburied on a rival’s land it will lead to luck diseases appearing in their children -- poor nightsight, hollow teeth, the bad kind of dandruff, scoliosis, mirror fear, number problems, uncooperative bowels, sleep until midday. He never got sick but after school he moved to another country whose name I remembered for years.

Businesses facing east will be the first to close during global economic lag. Businesses who offer bathroom access to the public will have poor luck in their lifetime but will be blessed in endeavours undertaken after their collapse. My father never filled his gas tank all the way and so his clients fell to unpaid debts and other unscrupulous ways. He used to cut his hair and beard with scissors meant for heavy fabrics, dreaming darkly, sleepwalking.

The day my sister told our  mother that loving a man she didn’t marry was not the reason parking spots seemed to hide from them even on quiet grey days, my mother missed the brake pedal and put the car through a sunglasses stall. From then I was the only one my sister ever called, another escapee. Not long ago her son died in childbirth. See his ghost still tangled in the cell phone towers by the women’s hospital, the ones they built too close.

Jack Vening is a writer living and working in Naarm, Australia. He is currently completing his first book of stories and his fiction letter Small Town Grievances goes out to about a thousand mainly European strangers every few weeks.