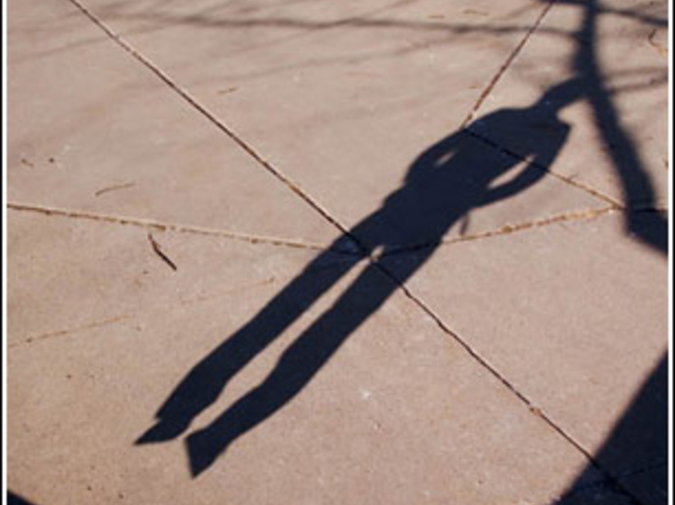 Sometimes the name they give you is all wrong. Sugar or Baby, something sweet, something helpless, something you are not and never will be. If they studied your face instead of grabbing your ass they'd know this. Other times it's Angelina or Britney, Yasmine or Pamela -- the names of neither wives nor girlfriends, just celebrities or chicks they want to fuck. Like the neighbor or a coworker or that girl in the ninth grade. Or maybe they can't figure out what they want and since they'll never get anything better, they pick you.

To you, they're all the same -- same name, same man: John. The same John who gets off in the time it takes to smoke a cigarette, usually less, and who sometimes pays and sometimes doesn't and instead gives you another black eye, cut cheek or bruised back, another memory to obliterate with a quick dose of death shot straight to the neck.

But this John gets it right. It happens between thrusts when he whispers your name like a prayer, like a wish he doesn't want to reveal but must as it's been trapped in his mind for too long. Michael. Your real name, or rather, the name of the boy your mother wanted so badly she named you first hoping her wish would come true. And it did come true, kind of; the way you grew like a boy and still, at eighteen, look a bit like one. Minus the tits and hips, there is boy in the masculine beauty of your jaw, boy in the severe cheekbones made deeper by the slow suicide of addiction, boy in the displaced rage you feel at the universe. And for this, you wanted to blame that name, Michael. You had to blame something for the evil that emerged in your father, the first in a long line of men who would ruin you. You had to blame something for the curse that forced you, at fifteen, to run to the cold embrace of a city you didn't know, away from the heat of your own father's desire.

Now you go by Mike -- a common name for a man, uncommon for a girl but suitable for you, an uncommon child. It's a word that describes your life now: quick and hard as a stiletto. An angry spike of a name.

But this man, when he says it like that, Michael, oh, Michael, it sounds breathy and fragile, almost feminine. You know he's in that place men go before the end, that heavenly limbo where the world could catch fire and they don't care because every cell in their body is fixated on their own, delicious burn. It nearly makes you cry to think of it, how he's uttered your name in his heaven. It's then you remember your namesake: the archangel Michael, a commander of seraphim, chief prince of heaven, God's finest. The one who cast out Satan. The one whose name meant Like Unto God.

Then you think of the painting you saw in a library so long ago, in a giant book full of saints and heavenly creatures. You remember the scimitar curve of Michael's form, the muscular wings spread out behind him, transforming his body into a powerful X-shape as he held aloft the sword of Heaven. Under his foot was the head of Satan, a balding man with enormous hands who even then you knew resembled your father. You remember marveling how beautiful Michael appeared with his angel wings upon a man's body with a woman's face and the soft, golden curls of a little girl.

Then the man on your back starts crying and you realize he's needed this for a long time, longer even than you -- to hear the name Michael, oh Michael spoken in his moment of heaven. You realize you've both needed this, a glimmer of bliss amid the squalor of addiction, amid weeks of not seeing the sun only the backs of alleys and the insides of cars and the ceilings of motels with water stains on the ceilings mapping the geography of your miserable life. And when you hear your name in his cry, the wetness in your eyes haloes the streetlight overhead, and suddenly you feel that you are that angel, that fearless soldier of God. You know it is not the name, but you who are holy.

Sharon McGill received her MFA in fiction from Penn State and has stories appearing most recently in Opium, Spork, and Redivider. She is a co-founder of the journal Monday Night, which she designs and illustrates. A gallery of her visual art is at sharonmcgill.net.