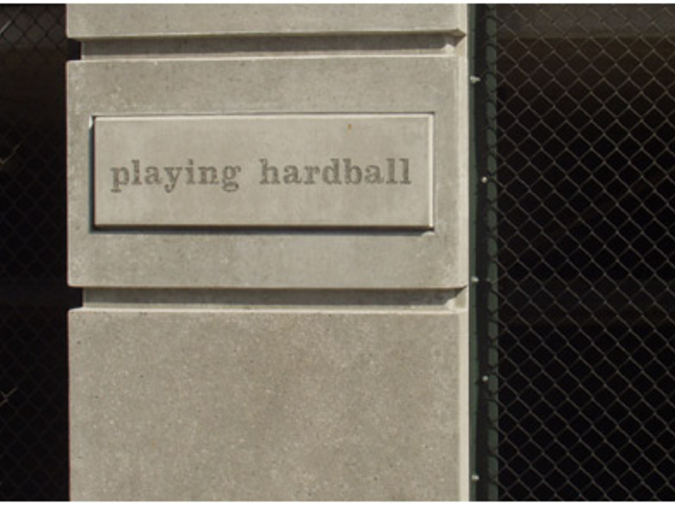 He doesn’t float to the plate, just walks. A smattering of applause, what you’d expect on a Wednesday afternoon. “Now pinch hitting,” the announcer calls.

We look to the scoreboard, see what the kid’s done so far this season. The hand-me-down Jumbotron from the bigs.

Got our minimum wages worth today: bottom of the ninth, two out, runner on third, tie ballgame.

The sun does the wave over the late afternoon and burns away, blazing our faces warm. Too hot for a beard, we think, even if it is well trimmed.

He stretches one leg outside the batter’s box and checks the sign from the third base coach. He bangs his cleats with a tarred-up Louisville Slugger. Number 33 on the back of his jersey, which Larry Bird is pretty pissed about, according to Sportscenter. He wears his stirrups high, old school, we say, kid respects the game. The pitcher toes the rubber, winds, cranks, fires. He’s taking the whole way, has always taken the first pitch, something Pops stressed in Little League.

Slider, low and away. Ball one.

Hit a homer, a boy screams, slapping an unbroken glove into his thigh.

He’s been in triple-A for most of the season, long enough for opposing scouts to have a book on him. Kid can crush a heater anywhere near the strike zone, they write, but has trouble with stuff that moves.

Swing and a whiff. Strike one. Looks like he’s golfing, guy says. You da man, yells another.

Past few weeks, paper says the batting coach been spending hours with him, both of them in the cage behind the stands, sweating through those orange t-shirts, sweet pop of wood on stitched cowhide echoing through empty seats. Everyone chews tobacco in the bigs, Coach probably tells him, offering a plug. He takes a pinch and works it between his teeth and cheek. Step in and take a few more cuts, Coach tells him. He does. Think you can get my wife to try some weird shit in bed, Coach asks. What kind of weird shit, he asks back. Little three-way action, Coach says, spits and winks.

The runner on third dances a few steps off the bag, leans toward the plate as the pitcher unfingers a fastball.

He gets around late and fouls it off. Strike two.

They take buses everywhere in the minors. The stadiums are Xerox copies of each other, all smell like warm beer splashed over a thin crust of squirted-out ketchup packs. Easy to picture him studying the sky while they drive to the next town, occasionally tossing over pages of the Bible or GQ. You think this suit would look good on me, he asks one morning to his seatmate, shortstop Gubby Jumisto. You know in the major league (pronounced “leak”), Gubby says, every hotel room has free porn, and not that soft shit either, mang, fully penetrado. He nods, looks away. Then he pretends he’s asleep for the rest of the trip.

He steps out and re-adjusts his cup, then de-helmets, swiping the wristband on his forearm across a scarred forehead. That from crashing into the wall and robbing that homer last week? some fat dude asks. Nobody answers.

He steps back into the box.

It’s true, sure as divorce papers: he can’t hit a curveball. But this kid on the mound, this tall goof, Larbman, he can’t throw one. Just a giddy-up fastballer, decent changeup and a slider he can’t yet control. Doesn’t have the stuff that will get him to the Show.

Larbman holds the runner from his stretch, gets the sign from the catcher. We guess fastball and hope he guesses the same.

A breeze, like the sky opened the fridge, sweeps across the stadium. We don’t want this day, this freaking moment, to ever end. Just the right kind of drunk and in love with everyone we’ve ever met, ready to dry hump the world, if only we could get it up.

We take a deep breath as Larbman rocks and delivers. The runner on third bolts, chugging down that line for home, like the base he jumped is fuse-lit. Anticipation burns in our stomachs along with soggy nachos and jumbo beers and crap we don’t want to go home to.

We—standing now—all wonder the same thing as the fastball hums right down Broadway. There’s something important here, something significant, but it’s happening too fast. All we can do is watch.

He transfers weight, starts his swing. And all of us wonder the same damn thing about him. Funny thing, he can probably read our minds.

The bat rockets around in an upward arc, coming through with enough to knock the cover off the ball. Mid-swing, he lifts a shy smile, as if to answer, Of course I do, dude, but goddamn does it all get old.

Patrick Walczy lives in Washington, DC where he is co-founder of the area's first GLEE club (Grandmothers Love Electrical Engineering). This summer they will construct a parallel circuit and talk about their grandkids.