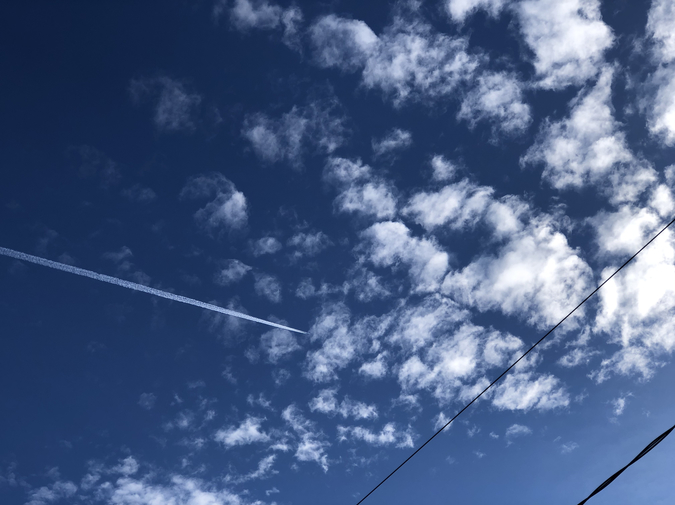 By late August, Mary-Beth was sweating on her front porch swing, a bottle of Budweiser resting on the table her daughter Madison gave her for Mother’s Day a decade earlier. Mary-Beth had been watching the crew inch slowly down Vincennes, a few feet every day. The project was way behind schedule and it was all her neighbors could talk about. For months they’d had to stay off the street and the no-parking signs had been on the trees so long that many had disappeared. Sometimes they ended up in the yard or else floating by in the summer flooding, little, dirty pink ships swirling around.

Her husband Harry was at work or maybe out at the golf course. He didn’t play, but he liked to haunt the clubhouse, lean over the glass cases and shoot the shit with his buddies. He’d watched the crew the night before, half a block down, hitched up his pants, and spit his wad of chew into Mary-Beth’s dying daisies. “They’re takin’ their sweet-ass time, ain’t they?”

Mary-Beth sipped her beer and watched the workers. They all wore neon yellow vests and were more concerned with smoking than going over their handiwork. The summer storms had come and gone and you couldn’t tell a difference. For three decades Mary-Beth had watched Vincennes Street flood. Sometimes it got so bad somebody would come bobbing down in their fishing boat. Even Harry and her got out there once in his beat-up Pelican like they were on a cruise.

They’d been talking about that the night before, her and Harry. Remembering that day and how strange it’d been. A pop-up storm in July that dumped an ungodly amount of rain. They’d been drinking their coffee when the local news came on with tornado warnings, the weatherman with the obvious toupee standing in front of radar lit up like the holidays. Forty minutes later and it’d just stopped, leaving a rushing river of dirty water running down Vincennes. Harry went out back, got his boat, and then they were floating down the street, waving at the people out on their porches, the air reeking of damp cardboard.

In the middle of remembering Harry had changed the subject out of nowhere. “My grandma told me something once and I never understood it ‘til now.”

“She told me when she was just about to die. She got awful nostalgic there for a while. She didn’t talk about much of nothing except the past. She’d sit there for hours, going over every page of old photo albums and tellin’ the same old stories about the same old people. She wouldn’t even turn on her TV.”

“She said, Harold, I want you to hear this, I want you to remember this. And maybe someday when you’re as old and used up as me you’ll remember what I said and you’ll get it. You’ll finally get it.”

Getting older, Mary-Beth understood that more and more. Out at the Wal-Mart they were always moving things around. Everything but the meat and the milk. You’d go in one day with a decent idea where to find your groceries, and the next you’d be as lost as an out-of-towner. Just yesterday she’d been out there in the makeup aisle and she couldn’t recognize any of the brands or the names. It used to be that lipstick came in a few shades. Red. Cherry Red. Deep Red. Now there was Crimson Mystery. Flame Out.

She’d settled for something nameless and cheap, along with some eye shadow she’d worn years ago and was surprised they still made. For a minute she’d even wandered over to the underwear section and considered picking up something special. There were teddys over there, the kind of thing a girl might buy before her wedding night. But Mary-Beth had never worn anything like it before, and the idea of starting now just felt perverse.

The crew moved a few feet down, their trucks getting into gear with an exhausted sigh. The men checked their work, stubbed out their cigarettes, lit some more, and then chatted by the trucks. Mary-Beth watched from the porch, trying to catch a glimpse of someone.

Over the past few years she’d only seen Davey a handful of times. A glimpse at the supermarket. Once at the Terre Haute Honey Creek Mall around Christmas, near the pop-up kiosk where they burnt initials into tree rings. There’d been that day where she’d been in the right-turn lane on Main Street and he’d pulled in beside her in his black pick-up truck. She’d looked over and there he was, his wife Mallory in the passenger seat. Mary-Beth and Davey met eyes and he looked like maybe he might reach up to wave when the light changed and a Bronco behind Mary-Beth laid on the horn. She’d panicked and jumped the curb.

Back in the day, Davey and Harry had been as tight as thieves. They bowled together on the same team out at the Starlight Lanes. Every Wednesday night for fifteen years. They had the trophies and everything. One time, the couples had even driven the two hours together up to Muncie for a state tournament. The boys hadn’t done much in the standings, but afterwards the four of them had gone out for a steak dinner and drank too much wine. “Why don’t we do this more often?” Mallory asked over dessert, and no one had an answer.

Those had been anxious times for Mary-Beth. Thinking back on them from the porch swing, she remembered a ceaseless need, a hunger that never let go. After Madison moved out, she ran herself ragged from changing things. Moving knickknacks here and there, shifting furniture and then just returning it to where it’d been. While Harry was at work she’d exhaust herself for never stopping with her pacing and puttering.

That’s when she’d gotten working outside. She’d moved everything in the house she could move. Painted one room after another. Replaced all the dishes and cutlery. She remodeled Madison’s bedroom. Wallpapered and laid new carpet. Inside she’d done everything she could. So she moved to the yard. Dug up the flowerbeds, replaced the soil, cut out a small garden by the shed out back where Harry kept his tools, his boat, and a rusted-out ’74 Chevy Caprice. She raised carrots, potatoes, lettuce, green beans. She wore herself out canning.

That’s how she’d paid Davey to take out the tree a decade ago. She didn’t know why but that tree had been nagging her for years. Just looking at it, with its dead branches and ashy bark, made her feel like she was dying from the inside out. She’d hassled Harry to take it down until he’d asked Davey for a favor. Mary-Beth met him out front, in the street, with a box of tomatoes and cucumbers.

Davey brought along city equipment for the job. City chainsaw. City chains. City truck. And he made short work of that dead tree, bringing it down within the hour. The afternoon was still young by the time he cut up and lugged the chunks out to the truck. When he came into the house, he had sweated through his dirty shirt and the smell of damp denim and the sourness of last night’s beers drifted through the rooms ahead of him. Mary-Beth had never smelled anything like it before.

When she looked back on that day and how they ended up on the new carpet in Madison’s room, their clothes in heaps by the door, Mary-Beth blamed the smell. She reasoned there was something about it. She’d read about hormones before, or pheromones, whatever it was, something like it in the paper, and she figured that’s what it had to have been. A big strong man and his sweat. She couldn’t be held accountable. It was nature. Like weather fronts. The way things were.

Of course, he came back. Did a few things around the house. Unclogged a drain. Put up drywall. Even gave her a new set of cabinets for the kitchen. Always when Harry was at work. And the city truck was parked on the street more days than it wasn’t. They always ended up back in Madison’s room. On that floor. On that carpet. And sometimes, when it was over, they’d sit in the kitchen, nurse a beer or two, smoke a little, and talk about the weather and whatever was in the paper. Every now and then Davey would ask Mary-Beth if she wanted him to leave Mallory. And every now and then Mary-Beth would ask Davey if he wanted her to leave Harry. Most of the time neither would answer and the question would just linger until it was time for Davey to leave.

Five years later he just hadn’t shown up on a Wednesday. Then he missed that Thursday. It wasn’t like him. Mary-Beth had to hear the news from Harry, who heard it out at the golf course. Davey had been tearing down an old metal shed on his property and collapsed. “Quadruple bypass,” Harry had said and then whistled, like he couldn’t even imagine. Mary-Beth slipped away and locked herself in the bathroom. She cried hard then, sobbing as she bit into her fist lest she make a sound. She gathered herself, washed her face, fixed a pan of Hamburger Helper, and never brought the subject up again.

With another sigh, the crew came rolling down the street and parked in front of the house. The boys got out of the truck and nodded her way. One tipped his hardhat. Another lit up a Marlboro as he examined a storm drain. She craned her neck to check the second truck and there was Davey nestled behind the steering wheel. He waited a minute and then hopped out, carrying a clipboard. As he came around the truck she could see his hands were shaking. He’d lost a ton of weight. The hairy potbelly she loved so much, that she used to run her hands over and stroke as they laid in the floor, was gone. He looked old. Fragile.

“Afternoon,” he called to her.

“You know,” she answered.

He tucked the clipboard under his arm and then lifted off his hard hat. He’d done it the same way the day he’d taken down the tree. Stood right there in her kitchen and wiped the sweat from under his filthy Stihl Chainsaw cap before he said, “That just about does it.”

He thumped his chest. “Still tickin’.”

Mary-Beth nodded. “Mine, too.”

There was a second of awkwardness as he shifted his feet and glanced over at his workers unloading the truck. They were running hoses, prepping the jackhammer. A young kid stumbled with a big cooler and dumped a load of water in the street. Davey watched, shook his head. He called up to the porch, “Good seeing you.”

“Good seeing you,” Mary-Beth said and then got up. She stopped on her way to the door. Turned and found he was still standing there, eyes on the porch. Not quite sure why she was saying it, she called out, “It never stops.”

“I said it never stops.”

She went inside. Rinsed her bottle out, dropped it in the trash. The house made her feel itchy. There were so many things. So much stuff they’d gotten over the years. It was all in its place but it could all be moved. A few inches here, a few inches there. It occurred to her she could move everything. It could all change. She paced the rooms until the light faded and she could barely see. The forecast called for rain.

Jared Yates Sexton is the author of three collections of fiction, a novel, and most recently American Rule: How A Nation Conquered The World But Failed Its People from Dutton/Penguin-Random House. Currently he is an associate professor of creative writing at Georgia Southern University.