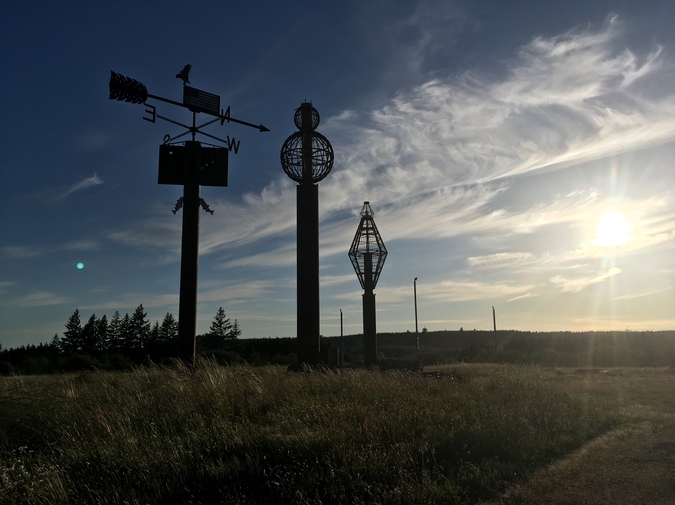 By the time he’d arrived at the Atwell Park Summer Solstice Festival, Bill Hannan was so high he mistook one of the paper lanterns hanging from the red-lit oak tree at the center of the park for the moon. Bill was 48 years old and had in his bloodstream oxycontin, weed, Adderall, beer and rye whiskey. The moon shouldn’t move, he thought and then realized his mistake and began taking long, deep breaths. He was sitting cross-legged in the grass, drinking a beer, trying to find a way to orient his spine so that he did not feel constantly like he was falling backward. In front of him, a woman sat holding a small dog in a duffel bag. Behind him, two people kissed loudly in a way meant to show other people that they were kissing. The dog shrieked and the woman fed it something that looked, in the dark, like hamburger meat. Behind the oak tree, the sun faded, and the sky turned emerald green.

Bill had left his apartment to come to this park to see his daughter, Haley, preform acrobatic maneuvers on a metal fixture hung from ropes on the oak tree. Her performance was one in a series. The outfit was called Aerius and it was made up of twenty or so former gymnasts, dancers, and rock climbers. When forced to describe the show to people he knew, Bill said it was like the Circus only sort of psychedelic. For this reason, he didn’t mind watching one performance a year. He enjoyed the colored lights and the music. He liked too that the show was all done hanging from a big tree and that it did not cost any money to attend.

There was a bigger crowd gathered tonight than Bill had ever seen. He would have been nervous for his daughter if those feelings could have breached the membrane inside of him created by the drugs and liquor. Two women sat to his left and looked at pictures on a phone. Their faces turned blue, ghastly, and Bill wasn’t sure if they had bodies. He looked around and saw more blue faces, like floating masks, hovering in the darkness. The night smelled like grilled meats and stale beer. A man on his other side huffed a vaporizer and breathed out a wall of smoke. Bill wondered how there was so much space inside the vaporizing man. How could he possibly hold that much of anything inside himself?

The sky turned from green to black and the lanterns wavered as the wind picked up. Then the music started and three women on stilts—none of them Haley— walked across the grass like robots in tall, kaleidoscopic pants, smiling huge white smiles and dancing with the top halves of their bodies. Bill was impressed enough with the stilt walking but then the three women approached three metal rings hung from different branches and began to swing around them in rhythm with the music and he lost track of his thoughts and just sat there, awe-struck and stoned. Their long stilt legs left hazy trails in his vision and he thought he might know the words to the song on the speakers even though he’d never heard it before. Then the stilt women dismounted from the rings and stilt danced back the tent they had come from.

The music turned slower and the lights faded into red and two figures descended slowly from the shadows near the top of the tree. The red light made the cracks in the tree bark seem deeper. The figures were both females, but Bill could not tell if one was Haley. He hadn’t seen her in half a year, and he knew, from the pictures she posted online, that she’d changed her hair, dyed it purple on the side. As the figures descended, they spread out their arms and he saw that they were wearing capes made to look like butterfly wings. The butterfly figures danced in unison with their heads aimed at the earth. The song on the speakers was Landslide by Fleetwood Mac and Bill couldn’t help but hum along. The novelty wore thin pretty quickly and he was forced to sit uncomfortably and think thoughts.

The butterfly women flapped their cloth wings and he thought of all the people he had failed and the ways in which he had failed them. He thought of when Becca was still alive and how one night they had been so far gone they left the front door wide open and when they woke up the next afternoon he searched and found that the cat was just a smear of muddy colors on a two-lane highway a few hundred yards from their house. He lied and told Becca that he hadn’t found anything. He thought of slipping old gift cards out of purses in the breakroom at work and then giving them to Haley for her birthday and then not having a good answer when she asked why he’d give her a gift card to Starbucks with only two dollars on it. He thought of when he’d asked Haley to fake having ADD so he could get a prescription for Adderall. He took some of the pills for himself and sold the rest to his nephew.

These thoughts started to swirl together. He worried that they might combine and become one thought. Become the thought—the one that existed at the center of the cyclone. But then the butterflies receded into the trees. The music shifted and Haley appeared, wearing gold, eyes shining, and she danced her way toward a metal fixture shaped in what Bill thought was a hexagon. The crowd cheered and Bill swelled with a feeling he could not name. It was almost like being cheered for himself. He put his beer down to clap but by the time he’d done so the cheering had stopped, so he said, “Haley, yeah!” after everything was quiet and his voice seemed to hang in the black air. She did not react. People looked at him and he wondered about the distance between thought and action. Why could he not stop himself from doing or saying the things that popped into his head? Who knew where those thoughts even came from?

Haley gripped the metal fixture and lifted her feet off the ground. The muscles in her arms tightened and she smiled rigidly. A bald man at the base of the tree pulled on a rope and the fixture—and Haley—rose up toward the highest branches. Bill had to tilt his head back to see her. She spun around the metal bars to some song that she loved and had sent him in an email, but he had never listened to. When she moved the red light caught the little gold squares sewn into her outfit and it looked to him like a hundred eyes blinking across her skin. He half-remembered the smell of gymnasiums, chalk-covered hands, lifting her up to the uneven bars when she was too small to reach them. He would stand behind her as she swung back and forth, his hands out, knees bent, ready to catch her if she fell.

Now she came back once a summer for the festival and depending on her schedule, maybe they got dinner. He read her emails over and over. He’d come back days after they arrived and read them again.

Bill stared up at her and considered how strange it was that there were so many things in the world for people to do. Acrobatics hanging from trees. Why hadn’t he thought harder about what he would become?

He was thinking about himself when he saw her hand slip. She was upside-down, doing a pull-up in reverse, pushing her legs toward the night sky, when, first her right hand faltered and then the left, and then she fell, unceremoniously, and landed neck first on the exposed root of the oak tree. She had no time to flail. The sound was like a carton of eggs dropped on the sidewalk. The screams started before she hit the ground. Men in red jackets rushed out of the tents and surrounded her.

Bill didn’t know what to do.

The loudspeaker crackled and a voice said, “Um—”

Bill stood with the others but walked in the opposite direction. He walked into the colored lights and the grass turned purple. He glimpsed his daughter’s body between the crowd of EMTs. He saw her fingers flinch and spasm—the hand was covered in something that looked to Bill like golden oil. No one tried to stop Bill from approaching. The other members of Aerius stood in a half-circle and covered their mouths of faces or put their heads together and prayed audibly. The gold fluid Bill had seen on his daughter’s hand was pooling out from her body, draining down along the tree root, causing the grass to glow like fire.

“Oh my God, oh dear Jesus,” one of the EMTs kept saying. They weren’t doing anything. They were just looking at her.

And Bill saw why they were only looking. Why there was nothing they could do. Haley’s head was mostly separate from her body. The force of the fall, combined with the angle at which she struck the ground, had caused the skin of her neck to sheer. She was face up now, and her eyes were still moving. She tried to speak but gold liquid bubbled out of her mouth and slid down her cheek.

In the neck wound, Bill saw more gold pumping out of thick transparent veins. Between the veins were clear, coin-sized mechanisms fitted together in interlocking patterns. The mechanisms were like gears made of some hard jelly and as Bill watched, the rate at which they turned began to slow. The muscles in the neck were a foggy color and beneath the muscle were black wires that hissed and sparkled. Deeper inside, he saw the spine, bulbous and made of chrome. An organ, or something like an organ, had spilled out into the grass. Bill did not know that the neck contained organs. It was a brilliant lump of fatty tissue and beneath the pale exterior, he could see iridescent colors moving around and shimmering like minnows in shallow water.

More gold came out of her mouth.

“What is she?” someone said.

He pushed his way past the EMTs and dropped down beside her. He cradled her head in his hands. He saw tiny machines moving inside of her eyes. Her body gave off light—waves of violet pulsed out of her skin and into the air. The organ in the grass started to buzz—the sound was almost music. He held her in his arms and the gold liquid seeped across his clothes and hands. It was cold and warm at the same time. The wound smelled like turpentine. He thought at first her body was shaking but it was only him heaving as he cried.

As the light inside the body began to fade, the gold liquid on the grass drifted upward into the air and floated in trails of bright, metallic droplets. The liquid on his skin burrowed and seeped into his pores. It moved inside his body. The feeling was like a thousand needles searching for a thousand veins. The drops of gold hanging in the air shifted and began to float in Bill’s direction. The machines in Haley’s eyes had stopped moving. He wiped the gold from her cheeks, felt something new move inside his blood, and he wondered who had made this creature, and for what purpose.

Dan Stintzi received his MFA from Johns Hopkins University and was a member of the 2019 Clarion Writers' Workshop. He lives in Wisconsin with his wife and dogs. Find more of his fiction at danstintzi.com.