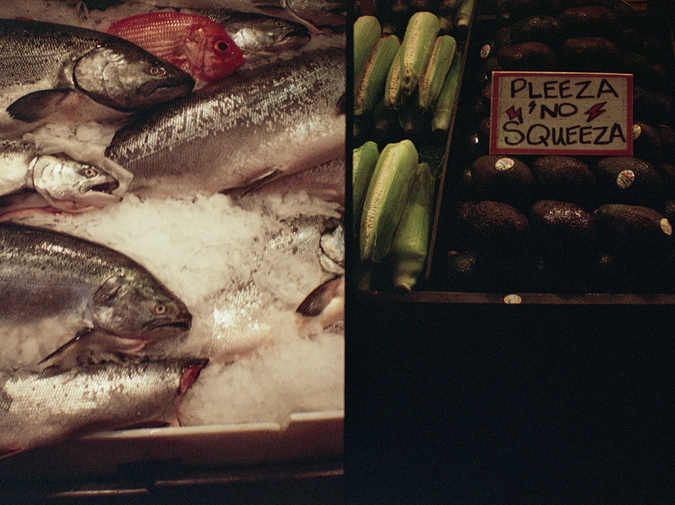 I got the news about my father yesterday. I was preparing for the profile I was supposed to write, on a local political figure who’d recently been accused of a number of indiscretions. Before I interview someone I like to make sure there’s very little I don’t already know about them, and so when the call came in I had what amounted to this man’s life piled up around me in clippings, notes, and post-its. I had to clear some of it away to find my phone.

I asked the woman on the phone about arrangements and she said not to worry ma’am; they’d already been made. “How?” I asked. “Who by?”

“Tobias Burrell,” she said. “A friend of your father’s. Are the two of you acquainted?”

And so it is that I end up spending the two rainy hours of the drive back to my hometown thinking less about my father, who I last spoke to mere days ago, than Toby, who I haven’t seen since before he enlisted and who I haven’t really known since we were kids, when my father and his mother would leave us together for play dates while they went to their Tuesday night meetings. I bite my lip, remembering how we used to tie each other up.

We’d do it with whatever was laying around: a jump rope, an extension cord, stray fistfuls of fishing line. Down in the basement, while the babysitter watched Spanish-language television in the living room, we pulled these things taut, secured wrists, ankles, and torsos to my father’s old recliner. Toby was a boy scout, so his knots were better than mine, but I was by far the more skillful interrogator. I yanked the shade off the lamp, pushed the bare bulb just an inch from his cheek, watched his pupils shrink to specks and his irises go the pale blue of good china--the sort that’s too delicate to ever really eat off of.

“Where were you the night of the twenty-second?”

Toby’s methods were clumsy, inferior. He fidgeted with the ends of the fishing line, dropped eye contact, tripped over his questions. Finally, always, he’d resort to the empty bluff, to threats you could look straight through and see tomorrow. “I’ll just leave you here all night,” he’d say. Then he’d turn and take a couple steps toward the stairs. I let my head sink back a little farther into the recliner, saw his hand land on the bannister, hoped he wasn’t going to do the thing he always did, which was stop, and turn around.

I am surprised at how amply attended the funeral is. My father was well-liked, but the packed church, the near parade-level procession of cars heading for the cemetery, is exceptional by any standard. I study the men and women huddled on the damp grass around the grave and see some who are only vaguely familiar, others I can’t place at all. I find myself wondering if someone at The Chronicle did a write-up and, if so, what it said.

Amongst the sea of black hats and coats, I glimpse a flash of gold: Toby, I’m sure of it. He always did have outrageously pretty hair for a boy. But I've given him enough of my father's time. I turn away, force myself to look instead at the ground, at the hole where they are about to put the man who raised me.

My father was always trying to teach me things--some more successfully than others. I learned how to shuck oysters like a pro, levering even the most resistant of them open at the sink, expertly separating the briny flesh from the half moon of the shell. I didn’t take as well to fishing, preferring to sit on the shore with the bait bucket while the light left the sky, watching my father cast into the waves. As we drove home through the velvet summer night, my father sometimes attempted to explain to me about alcoholism, about how it was a disease. By the time we pulled into the driveway, bait bucket sloshing at my feet, his voice had gone teary. “I got better and your mom didn’t. That doesn’t mean she doesn’t love you. You know that, right?” His words poked and prodded, searching for an opening, but I never cracked. By then, I’d had far too much practice.

Afterwards, people come over to tell me what a wonderful man my father was. I shake hand after hand, listen to the stories: how he brought double-stuffed Oreos to every Sunday noon meeting and single-handedly supplied and manned the clambake each spring. How, if you ever found yourself in a rough place, he’d be there as soon as he could possibly manage, to tell you that it was going to be ok, that you were going to make it. I take a step backward, let the heel of my shoe sink into the damp earth, and pretend I need a minute to fix it. I bend down and fiddle with the strap, breathing hard: what I know about my father wouldn’t cover a fraction of my desk.

Toby stands in front of me. He puts out a hand and I let him help me up. He’s taller than I remember, but that isn’t the half of it. He’s a completely different person than the teenager I saw last, just before he left home for basic training. The solidity of him, the set of his shoulders and firm line of his jaw, are erasing everything about the hesitant, vulnerable boy I used to play with. I stare into his blue eyes and swallow. How do you apologize to someone who no longer exists?

I held a fishhook up, turned it so it glinted under the light.

“What are you going to do with that?” Toby asked, his voice catching.

I had heard from my father that Toby got injured in Afghanistan. An IED flipped his Humvee clean over, killed the driver and another soldier, friends of his. I study him now, surrounded by the luridly green grass and the dewy headstones, scanning his body for the traces of it.

My gaze settles on the only mark I can see: a white dimpled scar that runs up from just above the start of Toby’s chin to the base of his lip. It stands out against his tan skin. I think of all the girls who must have run a finger along it, just before or just after kissing him. “What happened?” they’ll all have wanted to know, thinking about the desert, thinking about the war.

I wonder what he says.

Gretchen Schrafft is a fiction writer and freelance journalist based in Corvallis, OR. Her work has appeared in San Francisco magazine, The Rumpus, and Midway Journal, among other publications. She is currently at work on a short story collection.