In the 70s Everyone, Including Mannequins, Had Nipples 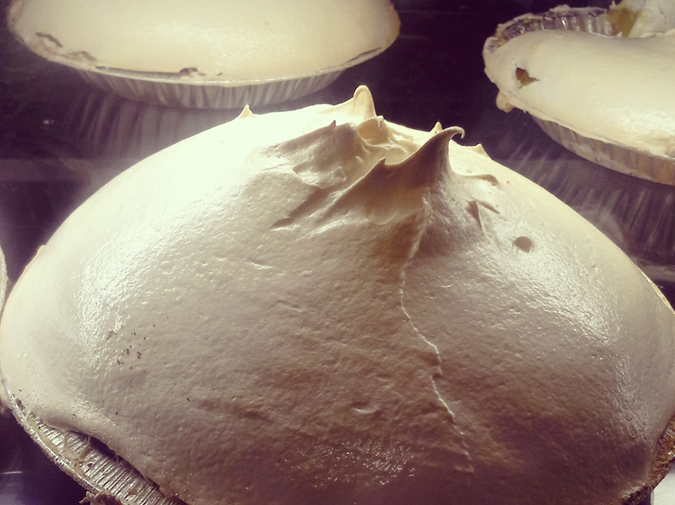 Once upon a time there was no sex, but sex was everywhere: in Laura's 6th grade locker with her roll-on deodorant, in Dr. Davidson's walk—slow and tight-calved, in Mr. Robinson's guitar—Cat Steven's "Wild World" each afternoon before the bell, in Mrs. Rogers' wavy, knee- length red hair—smelling of Wella Balsam and cigarettes. Sex was in the heat that gathered under the ceiling of the gym—when you climbed the rope to the very top you came down smelling of it. Sex was baked into the raviolis Mrs. Castro pinched shut around spoons of meat while Maria snuck thick slices of last night's chocolate cake for you to share upstairs as you admired her confirmation dress, all white eyelet and pearls. Sex was in John O'Connor's towheaded curls, damp on his humid scalp as he leaned in to marvel at the hugeness of your thighs.

There were strong urges in contradictory directions: Maria's older half-brothers, so shaggy and side-burned, you asked to take your plate up to Maria's room so you wouldn't have to face them over dinner. Then you spied on them from the top of the stairs, blood pounding in your throat with every swallow. And Paul in your class, who you wanted to press against the wall and kiss and whom you kicked instead, so hard he turned on you and screamed what's wrong with you?

It was a land where everything was safe until it wasn't. Ted Bundy, arm in a sling, waiting for you by every car. It was a land where you walked two blocks from school to the Luncheonette for a dollar twenty-five Hot Dog Special followed by a school-wide assembly introducing the Safe House program—look for the orange Safe House card in the front window if you need to ring the bell. A world where little Kathryn Of The Transparent Skin returned to school with bruised cheeks and bloody veins in the whites of her eyes. And Mr. McKean was suddenly no longer the boys' swim team coach, because he was a "bachelor." And Maggie told her mother something that made her mother fire the babysitter and made Maggie talk every week to a doctor named Leda while her mother waited in the car outside. (Somewhere you hear that Leda was raped by a swan.)

Once upon a time there was no sex, but sex was everywhere, and there was creepiness. There was Rabbi Schiffer on the receiving line after services cupping your cheeks in his hands and holding your face straight, so his lips had to land on your mouth, as he told your parents what a sweetness you were. There was Cantor Baar behind you at the pulpit as you practiced your Hebrew, pressing his tallis-draped front against your rear.

Once upon a time there was no sex, but sex was everywhere, and there were body parts. Maria leaned in the window of a lost driver's car to answer his question, and his purple penis was propped against the steering wheel. Laura's father slept naked and when you slept over you saw his long white buttocks as he left the bathroom in the middle of the night (like fresh, moving loaves of bread). One day Teo, a distant cousin from Israel appeared to tell your little brother (who told you) he liked to lick salt off girls' breasts. The gardener's son, rumored to be a rapist, worked shirtless in the back yard doing things to the flowers. His back rolled and glistening like a buttered croissant.

There was food. There was a seven-ounce smoked gouda devoured during General Hospital followed by graham cracker sandwiches filled with Betty Crocker cream cheese frosting during Edge of Night. There were stomach aches, and there were fantasies with Baryshnikov and David Cassidy.

Insert here a feminist history of gorging and female sexual repression from the primordial to the postmodern.

Once upon a time there was no sex, but sex was everywhere, and there was fever. It was the year of the chickenpox and then the extended family cruise on the Statendam: mothers in halter tops and Bermuda shorts sitting outside in the sun, silver reflectors under their chins; when you fell asleep on your stomach by the pool and your back crisped so that nothing—not Noxzema, not vinegar, not leaning forward for a week—nothing brought relief and you glowed heat and untouchability. And your cousin sleep-walked onto the ship's deck (he could have walked right off the boat into the moony ocean), and then went back to the bunk across from yours and snored with his mouth wide open beneath the ledge with the pennies he must have swallowed since they were gone the next morning. The rest of the week, hey Danny, got change for a nickel?

It was a land of intimations. There were Annie and Esme who cleaned the house on Tuesdays and Thursdays (lived together). There was the piano tuner who was a man one time and a woman the next (Philip to Phillipa). There was Harold and Maude.

Once upon a time there was no sex, but sex was everywhere, and there were rumors. There was Mrs. Donoghue (divorced) and Mr. O'Hara (single) team-teaching, smiling over your head. There was Laura at the end-of-school dance, arms around Timmy's neck. Why had you never seen him before tonight? And how had he gotten so tall without your noticing? And the spider that laid eggs in some girl's cheek so when she scratched what she thought was a mosquito bite, hundreds of baby spiders crawled over her face. Banisters were for straddling. Unicorns were for rubbing between legs and then throwing in the trash when their horns smelled.

Once upon a time there was no sex, but sex was everywhere, and there was fear. There was the drainage hole in the stone wall that opened into nothing but air over the quicksand inlet at the end of the dead-end block. The hole towards which you chased balls that rolled down the street so they wouldn't disappear, as you feared you too could—if you folded your arms and bent your knees and ducked your head—plunging like a playground ball to the fishy water that barely covered the silty bottom at low tide where a grown man could sink to his neck in muck. And there was Jimmy, another kind of fear combined with longing, square-chinned and squint-eyed and broody. Fear and longing and despair as when Jimmy tripped on his stairs with his fishing rod in hand and the end of the rod went through his eye and into his brain and you stayed up all night praying he would live, that if God let him live, you'd be better to your little brother and less fresh to your parents and he did live, but he was never the same—and it wasn't just the cane and the stiff leg he had to grab by the thigh and swing around the side when he walked. His face was crooked and he moved to the special ed classes, and when your parents invited him for dinner and your father asked him what piece of chicken he preferred (I'm a leg man because the leg never gets old, are you a breast man, Jimmy? Come on, you're a breast man, right?) he sat there with a weird grin on his face, half laughing half snorting, and you wondered if your prayers for him to live were not specific enough.

Once upon a time there was no sex, but sex was everywhere, and there was a whole rich life of love. There were afternoons on the front lawn loving back walkovers and back handsprings, and there was running barefoot to meet the Good Humor truck at the end of the street (pretending it was for your little brother) and cutting your foot on glass and Nancy from up the street with her rope choker, smelling like bubble gum and sixteen year-old-girl sweat lovingly carrying you home. There were swans' nests in the reeds across the inlet at the end of the street. Potato bugs and daddy long legs. Black-eyed Susans at the garden wall and, after two weeks in Maine, a gigantic sunflower—man-tall, plate wide and nodding its weird love.

Not everybody's father was as handsome as yours. Laura and Maria liked to come over and watch him play the piano, admiring how his hands could span so many keys.

It was a land of tube tops and velour and somewhere in the future were your children waiting to be slung over your shoulder like most adorable purse straps. Once upon a time there was no sex, but sex was everywhere and there was competition. There was Robby on his bike on your way home from school who you were supposed to ask to the square dance on Maria's behalf, but who you managed to get to ask you first. There were tie- dyed shirts cut into strips at the bottom onto which you threaded wooden beads that clacked and clapped as you walked so Timmy would turn away from Laura when you entered the room. There were dances you danced at the talent show so the boys could see your hips, and poems you wrote for class so the boys could hear your voice. There were boys too skinny and boys too dull, boys not smart enough and boys not mean enough. Boys whose chairs you pulled out when they were about to sit down and boys you made sure you were cast opposite in plays.

Once upon a time there was no sex, but sex was everywhere and there were placebos—hooker costumes on Halloween, sleeping bags in the station wagon wayback. Cat Woman and hot pants and Dr. Scholls. Chest hair and wrap skirts. Feathered hair and leotards and The Bionic Woman hearing everything.

Once upon a time there was no sex, but sex was everywhere and there were dreams—hiding that you could fly until you couldn't take it any more, then flapping your arms hard and taking off over roofs, naked and slick; dropped overboard from a boat and sinking to the bottom before realizing if you sucked hard you could breathe underwater, slowly, thickly.

You were movie stars and murderers in-the-making. Some of you had big plans. Others went along. Two of you designed a restaurant that served only breakfast and dessert. Afterwards, you made and sold painted dough pins in the shape of meaningful and repeatable objects— hearts, moons, roller skates. You were entrepreneurs and chauvinists and other French-sounding things.

Once upon a time there was no sex, but sex was everywhere, and there was death. There was the boy on the bike on his way to school caught under the 18-wheeler who you sat at your desk and offered a minute of silence to, though the principal wouldn't say his name over the loud speaker and you couldn't picture how it had happened and you couldn't stop picturing how you almost could picture the truck on your bike, on your leg, on your chest. There was the Billig boy diving into the shallow end of the pool. There was the kid who walked onto the neighbor's frozen pool and fell in and couldn't get out and no one heard him or saw him as he died. There was Death Be Not Proud all summer long on the boat in swells with your parents saying, when are you going to get your head out of your book and live a little?

Lynn Schmeidler's prose has appeared in The Georgia Review, The Southern Review, Mid-American Review, Brevity and other literary magazines. Her poetry has appeared or is forthcoming in Fence, The Boston Review, The Awl and other venues. Her poetry book History of Gone is forthcoming from Veliz Books. Her chapbooks Curiouser & Curiouser  and Wrack Lines are published by Grayson Books.