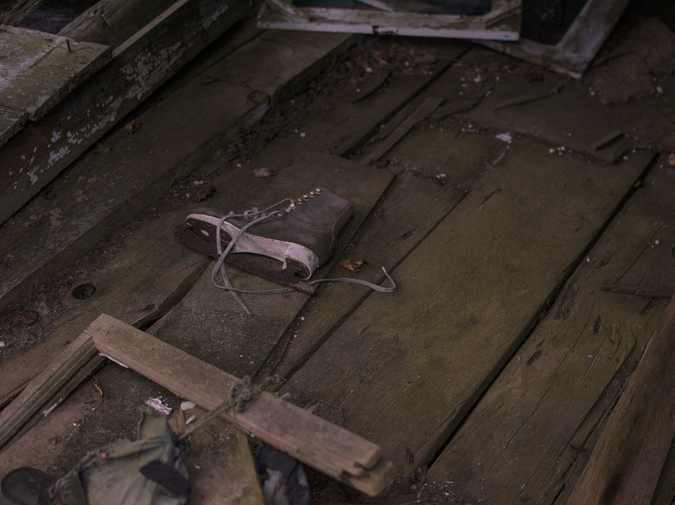 It was pretty good. Dinner was good. I had fun, making dinner, talking, all of that. She didn't invite me to her room, we didn't make out. We watched a Bill Murray movie, pre-Groundhog Day. There was a goodnight kiss on the lips after I had tied my shoes. I think we each had two glasses of wine over three hours, so it was nothing. It was easy to leave. The next time we have plans, it will happen that I'll cancel. Not at the last minute, but the morning of. And then the next day I will make it up to her, surprise her with coffee and a book that I think she'd really like. She can keep it, even. But then I will be out of town for a week and when I come back she won't be as excited to see me. We'll go to a punk show at Lucky Bar but watch our friends play pool in the back. Someone will ask us if we're dating and we'll just look at each other, and later I will sneak away into the night when she's in the bathroom, leaving a note in her jacket pocket: 'sorry, this place is just killing me, I'll call you tomorrow.' Eventually, she'll stop evaluating me. She'll stop wondering who I am, or what my intentions are, but she will decide I'm a good person, a good but broken person. She'll decide that I like her, but something is keeping me from sleeping over. She'll invent a reason that our relationship hasn't progressed beyond a couple of nights of passion and 6-7 almost awkward sexless interactions. But the reason she invents will be exterior to herself, and it will not affect her self esteem in a negative way. She will learn to appreciate parts of me other than my body, and simultaneously become slightly annoyed by other parts of me. My constant twitches, scratching. The way I talk about myself, how often I make reference to my insomnia. My taste in music. My aloof parts. My lack of telephone. There are annoying parts of everyone, but we forgive them for having those parts when we really like them, but my annoying parts will float around and remain unarticulated and unforgiven. The opportunity to talk about those other nights will have elapsed. Eventually she will no longer think of me as a potential lover, but simply a dorky unavailable person, a mystery. Eventually she won't think of me unless she hears mention of my name, or sees my friends, or a boxy japanese sedan from the 80s, or, perhaps, a Paul Simon poster, or an object that I have given her, like a book, or a bottle of nice vinegar. She will think of me fondly, maybe when she is with other lovers. She likes her new lover better than me, at least the lover parts of him. She likes the way he seems lost in bed, or rather, that he loses himself, that he becomes an animal, that he needs her. Sure I was good, attentive, but I never made her feel needed, which is what she really wants. What she really wants, is only for those eighteen pounding seconds near the end, when she feels like she is the only thing in the world that matters to him. And she needs that feeling at least once every few days but she can go longer. She's patient. When they go a couple extra days it only makes him need her more. Not that lover, or the next one, but the one after that, who she meets on the day she defends her doctoral thesis (he was in the library that afternoon when she was returning her books), will get her jokes the same way I did. He will get them and she will know he's got them because her voice has a direct line to his brain, like a vein returning blood to the heart, and by the way his pupils contract at the right moment. He doesn't have to laugh (though he does, sometimes, bellow an incredible one at the right moment), and he can twist her joke, often back on her, effortlessly, and they will banter this way back and forth, the object of their humour being her Ottawa roommates, her mother, and eventually their overly-precocious four-year-old son, Ira. And when Rich (that's his name), walks into the bathroom to find her stepping into the shower one cold January morning, he tells her that he is about to make her fourteen minutes late for work, silently undressing (faster than anyone she's ever met before) and stepping in after her, whispering, 'I'm not joking' she will think of me one last time, but only as a flash, a glimpse of my forehead or my underarms, but the rest of the image is muddled. She thinks, between blinking her eyes in the hot steam, of the evening I told her that I'd had a crush on her since the second time I met her, when she was eating out for breakfast, all by herself with a book, because she was eating out for breakfast all by herself with a book. I'm not joking, I told her. Come on, she said. I'm not joking, I told her. And then her husband's hand on her shoulder, and I'm gone.

Jeremy Whiston lives in Portland and doesn't own a cell phone. I think. (Actually, he just confirmed he lives in Nova Scotia.)