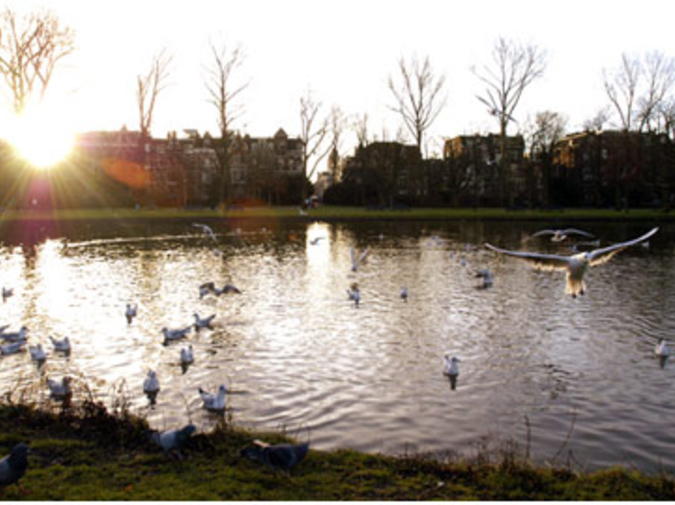 The cobble gloss contained inchoate images underfoot. Miram broke his stride and knelt to inspect the watery sheen but could not catch the specter. Drunken houseboat dwellers under an open awning mocked him across the sullied waters. He cursed them quietly and went on. At the arc of a bridge he stopped to watch the blue veins of diesel crawling atop the surface of the canal. The crows in the elms bantered within a vast murder. His associates awaited him in a warm smoky room, but he closed his eyes decisively, and then he returned.

It was not far to his flat, two avenues and another bridge. He did not delay as he followed his new intention through the shifting shades of evening. His hand shuddered in the doorway before putting in the key, but then nodding bodily, till his entire frame shook with assent, he went up to his attic room.

He stood naked before the vanity with mismatched candles casting a holiday light on his wiry frailty. The loaded pistol swung terminally at the end of his arm. His eyes receded into the mirror, dim and tired, and he glowered against his own stern glare. He put the gun to his head, opened his mouth. Wait a minute, he whispered, coming out of his senses, I don't want to shoot myself. No. Not at all.

His eyes widened awake as he caught himself in the mirror, and he looked at the gun in his hand, at the cocked hammer, horrified. He went to the window and braced himself, looked away, and fired the shot into the empty boulevard.

At that very moment a reasonable man not unknown in the city, Antoine, was hurrying to meet his fiance and her parents. His staccato steps muted in the gingko branches as he crossed Oosterpark and turned into the path of Miram's bullet.

Aargh, Antoine stumbled against the facade of the rowhouse, as if some power of the airs had shoved him bodily, yet his thoughts were intact. Becalmed by the cool mist, he realized, I've been shot, but I cannot endure this just now, no, I cannot be shot. He stepped away from himself, backpedaling into the moon's quivering beam, and then left himself slouched and short of breath on the cold cobbles. The canal waters stirred as the restless gar swam among the sunken bicycles. He looked back once but the fog had furled a veil about the past.

Antoine maundered along quiet rows and turned down unventured boulevards where lamplights flickered and failed. He had never been with a woman, never lied atop and writhed against the firm fleshiness of a woman's hips or been surprised by the naked strength of a woman's shoulders. He had never been flesh inside flesh since coming out of flesh. My god, he thought, as he went dizzily past narrow alleys and saw the red light shadow spilling out of doorways.

Well, she said, you've come to the right place, haven't you, and she tried to smile. The wine-colored light of the nightstand lamp made her frail hazel eyes seem darker than they actually were.

I've never been with a woman, Antoine repeated, a pleading tone in his voice.

And now you want to be with a woman like me?

Yes, I do. I don't care if it's wrong or right. What difference would it make?

Yes, she said, what difference... do you have a cigarette?

Of course, of course. She lay down on the bed and slid her hand across the crimson coverlet, turning her pouting lips to kiss her upward listing fingers. I do not want to be here, she thought to herself, anywhere but here. She stood and gathered her boa about her shoulders, struggled with a moment of self-contempt as she watched herself writhing on the restless bed, and finally she fixed a distant stare and went down the dark hallway into the midnight street.

She wished she had remembered her walking jacket. She wished she had changed into her street clothes. A drunken man hoisted a bicycle over the sagging chain of the canal barriers. Her stiletto heels tapped a hesitant tempo as she huddled within her arms and walked into the falling fog. Another john walked by and she asked him for a cigarette, and he apologized, he did not smoke. The splash of the bicycle slipping into the canal came through the deadening fog. The cafe was still open.

What do you want, Roxanne?

Do you have a cigarette?

The waiter reached under his waist apron and retrieved his packet of cigarettes. She bent forward over the table candle and struggled to reach the flame within the smoke-tarred cylinder.

Wait, the waiter said, reaching into his pockets for matches, thinking to himself, I should not be here. What is wrong with me? I should be with my mother. What sort of son am I? The struck match flashed and clean smoke rose heavenward in a dissembling blue ribbon.

He looked back only once to see himself lighting the cigarette of the half-dressed woman with the sad painted face. Damned, damned, damned, he thought. It was the twilight of the dawn. The lamplights switched off all at once, and the unlit air hovered in a charcoal mist. He passed a wary cat sitting in a dirt island among the cobblestones where a poplar trunk sent up its naked branches.

He pushed the bar of the revolving doors and went in and wrote his name in the book. The nurse stood from behind the desk and watched him shuffle down the hall. His little mother lied in the bed in her coma, as she had for so long, and the bible on the nightstand was open as always to Tobit. He began reading in a plaintive whisper, his vacant voice rising and falling within the commas. A nurse paused at the door, forced a grim smile, and stepped away.

I am tired, the comatose woman thought to herself, I am tired of the same old story, and of my son, yes, my son. I am ashamed of my shame. I cannot bear this room, this story, this child, any longer. She left herself there within the veil of jaded words and hurried down the hall. Outside the morning fog was thickening, wisping in curls around the passing cyclists. I never liked these dreary mornings, she thought, never at all.

She left herself leaning against the brick pillars of the portico. She went walking into another day where the crushed stone paths of the city park crunched under her slippers. The morning sun straddled the roofs of the canal houses, and the angelus was ringing in the neighborhood chapel. This is my favorite time of day, she whispered to herself, the early light, the low moon fading like a gas lamp, the chill in the air, and the angelus. Yes.

The dew rested in a thin layer on a park bench, and she used the hem of her hospital gown to mop a spot dry. She sat with her hands in her lap, her thumb and forefingers fretting as if she held her beads. Her colorless lips murmured as if in prayer, but she was thinking, I don't know, I don't know now where I will go.

A philosopher approached the bench with his heavy satchel laden with books and something else in the middle morning and sat beside the woman. He remained there throughout the day, till long after the woman in the hospital gown had wandered out of sight. He twirled a few long threads of his moustache, and made furtive notes in his books. He could see the evil genius striding confidently within the air, moving through the minds of men, the minds of women, ever bemused by sentient things. Evil genius, he said aloud, you have met your match. And he sat in the park till the dinner hour, when the park had emptied into a vespertine stillness. He took his pistol from his satchel and pressed it to his abdomen, put his thumb on the trigger, looked away into the field where the snipes coated the November branches like a flecked skin. The shot sent them up.

M. T. Fallon is an office worker currently living and working in Colorado.