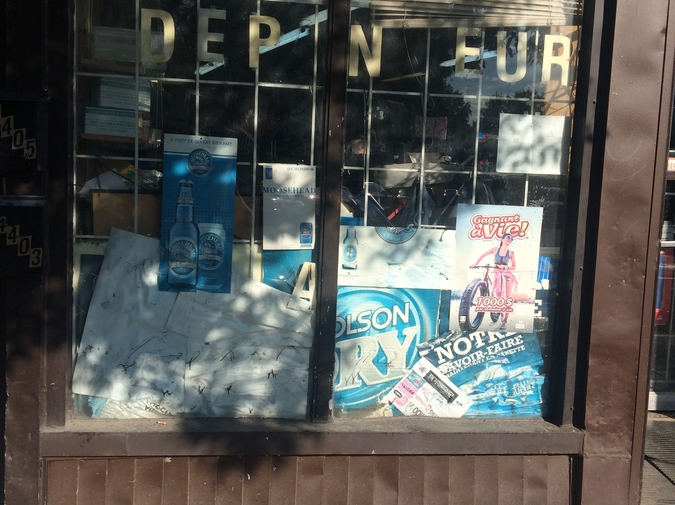 When I come up out of the metro I text my buddy. I tell him I'll be in the small park on the corner of Saint Laurent and Jean-Talon. But instead of heading right over I want to find a depanneur. And after a quick look around. I realize I'm lost in this quarter of the city.

I walk a few blocks in one direction. But quickly give in to hopelessness. Open my phone. I've gone too far. Of course. I turn around. Make a left. Out front of an Italian restaurant the sidewalk is crowded. I meet eyes with a pretty young woman in a short black dress while her date isn't looking.

Then as I break our gaze. There it is. The depanneur. An ornamental sign hanging above the door gives it away. A plastic facsimile of a cheap beer's trademark. This is an omen. My good luck coming through. I finally found a place. And it looks like they have my brand.

With my hand on the door I'm sweating through my clothes. This is the last night of a weeklong heat wave. And christ it's gonna be hot inside the tiny bar where SUMAC is playing tonight. I should've stayed home. Like I always do. An old man on his couch.

But it's too late for giving up now. So I pull open the door. Step into the small corner store. And the air conditioning hits me. Maximum output. All the perspiration on my body instantly freezes. I think about lying down on the ground. Curled up under the shadow of the chip display. Quoting squatters rights.

Despite this urge, though, I carry on. Walking over to the beer fridges. Notice the large, brightly-coloured decal affixed to the door. The brand I drink. Two for four dollars. With tax and deposit, it's five even. Same deal all over town. A no-brainer. I slide the door open. And grab two cans.

At the counter some college-age brat is paying. The clerk and him are joking. Smiling and laughing. When he pays, the old man tells him to have a good night. I can hear the sincerity in his voice. The young man waves over his shoulder, muttering his own good bye as he leaves.

I place my cans down as the bells over the door are jingling. The old man says bon soir. I nod and tell him the same. He grabs my beer. Pulls them towards them. The scanner beeps. I drop a five dollar bill from my hand. And the aging clerk says six et vingt-cinq.

And he tells me with tax and deposit that's the price. I say that he's wrong. He's made a mistake. That it's five and nothing more. Two for four. I know the deal. I've been availing myself of them all over town for years now.

But he says I'm off the target. The price is two for 4,99$. I call bullshit. Step back. Walk towards to the cooler. Bend over. Strain my eyes. And there, pasted over the two zeros, a tiny orange price sticker with 99¢ printed on it. The cunning old fucker. He's betting no one says a thing.

But I have a great big mouth. And very little control over it.

Oh ho ho ho, I say while taking the two steps back towards the counter. Wagging my finger at him. Laughing. The anger of being taken for a sucker rolling up from somewhere deep inside me. That’s pretty sneaky of ya pal. And I toss another five on the counter in front of him.

He grabs at it with his hairy hands. I pull the beers toward me. And he asks me to repeat myself. You're sneaky I drawl out. Well that does it. He starts shaking with old man rage. Like a pressure-cooker rattling. About to blow at the seams.

Gimme these! he starts yelling. I'm not sneaky! Get out of store! I admire his rich baritone while he gets a hand over mine. His thick knuckles make to crush me. I let go of the beer. Demand my money back while snatching it from the counter in front of him. I'm not sneaky! He yells again for good measure.

Which gets me laughing. This old man shuddering in front of me. Trying to prove his honesty. A hell of a joke. So I lean over the counter. Pointer finger pointed directly in his face. If you weren't sneaky…you wouldn't be so fucking mad!

Casually, I lean back. Stuff the two fives down into the pocket of my jeans. He yells at me again to get out of his store. That he's no sneak. As I turn to leave I tell him to go fuck himself. And to shove those two cans up his ass.

The last I see of him. Before the door shuts behind me. Is his hard-stubbled face, now red. Filled with fury. Hands balled up in fists. Ready to smash my skull. But willing to break whatever's close at hand.

Outside, the heat is more oppressive than I remember. And my need of drink is stronger than when I went in. But I'm beginning to get my bearings. And if I'm not mistaken, there's a liquor store close. A feather in my cap.

So I head off in that direction. Towards a drink and the park and my friend. My mood considerably better. And now instead of fearing the sweaty multitudes of a heavy metal show. With my blood riled up like this. I'm beginning to look forward to them.

Steve Anwyll is a Canadian bitch whose novel Welfare is out with Tyrant on Xmas, 2018.