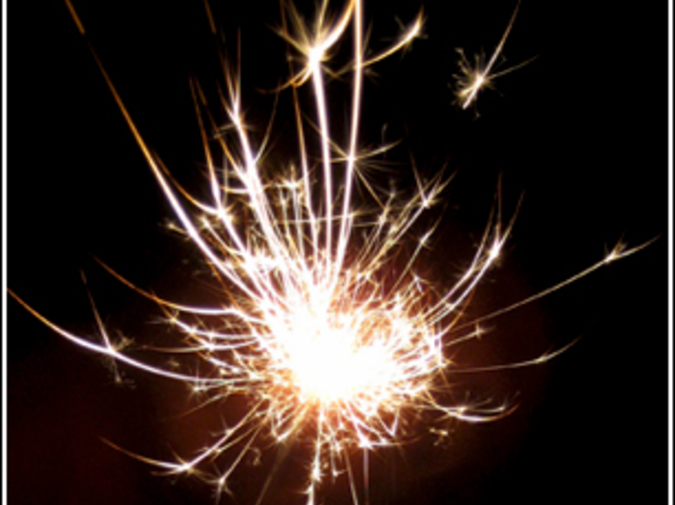 She is thinking of her father at the breakfast table, reading the paper. Can almost hear him humming softly to himself. Can hear the slow crunch of cereal and the metallic zing of his teeth on the spoon.

The boy is sliding his rough hands up her thighs, tugging at the tight button of her jeans. He is squeezing her breasts too hard, pinching her nipples. He is pulling her head back, licking her neck, biting her lip.

They are facing each other, straddling the red vinyl weight-bench in the corner of his parent's basement — the fake-plastic-pre-fab-hardwood floors creaking beneath their feet. The walls are the rich blue of the sky at dusk.

She can feel the warmth of her own body against his cold fingers as they slide along the elastic band of her panties, can feel him pulling her hand to his crotch. He is nibbling at her shoulder, her v-neck sweater pulled hard to one side to expose the sharp length of her collarbone.

She can't stop staring at her reflection in the mirror on the wall behind him — the pink ribbons in her long, brown hair; the pink tip of her tongue on her white teeth; the shining, silver hoop in her eyebrow. She stretches out her neck and notes the pattern of freckles in the hollow of her throat like a constellation — the jagged "M" of throne-bound Cassiopeia.

Antares, her father had read in the paper: the name of that soft red star to the left of the moon. Visible all this month and next, he'd said. Soon it will collapse in on itself — doomed by the force of its own gravitation pull — and then it will explode, its vela twelve times more massive than our sun. For weeks and weeks it will outshine the moon; for years to come, the brightest distant object in the sky.

If your throat tickles, scratch your ear. Blow on your thumb if you're getting too nervous.

Angie Aden, the freshman attendant, is wearing a plaid wool skirt with brown leather boots. Rusty orange sweater. Boys do not like girls with hair on their arms. She's biting her nails before the parade begins. To keep your mouth busy, eat carrot sticks or celery. Chew gum. Did you know? The fastest growing nail is on the middle finger. Hawkgirl, the queen, is tempted to show all of them hers.

Did you know? On any given day, sexual intercourse takes places 120 million times on earth. The three things pregnant women dream of most during their first trimester: frogs, worms, potted plants. The tear-shaped indentation between Hawkgirl's lips and nose? The philtrum. It's the last place angels touch unborn babies.

When Hawkgirl was a freshman, she had favorite bridges: the Millau in France, the Ponte Vecchio in Florence, the San Diego-Coronado in San Diego.

The parade begins. She's aware of sirens far ahead.

Hawkgirl is classifying the other members of the court according to varieties of canaries: 1. colorbred (bred for color mutation); 2. type (bred for shape); 3. song (bred for singing).

She feels a lurch in her stomach. The homecoming court float begins to roll forward.

She folds her hands in her lap. Smoothes her skirt. Crosses her ankles. Closes her eyes and takes a deep breath. She's thinking of black and white photographs she saw in a magazine. A remote Japanese fishing village. Unchanged since medieval times. Naked girls diving for shellfish. Women pushing against the spokes of a large wooden windlass, bare feet in the sand, the windlass pulling an empty boat closer with every turn.

They're out all night, one party then the next. She's never danced this much before. Not like this — as if it were the end of something.

Then they drive on out of town in his yellow Barracuda, up the Blue Ridge Parkway, where they pull off at an overlook to watch the sun come up — hard light breaking over the horizon like men on horseback.

They race back down the mountain with the top down, cool dawn air in their lungs. They have the radio off. They're not talking. The western slope a long slow curve of darkness. They are pushing sixty, seventy, as if on the wings of Eos herself.

In the valley they slow to a halt on a low stone bridge, the river below as dull and flat as hammered tin.

And then it happens, another dawn. Another sun coming up, a new beginning. Young light mousing its way through the green trees, through a heavy mist from the river.

Later, in her mother's kitchen, she is still wearing the dress she made herself. The house is quiet with strange anticipation, waiting for a curse. They eat an entire strawberry-rhubarb pie without speaking. They eat and eat and eat — gorge themselves until there's nothing left but crumbs, their lips puckered from the sour rhubarb, glistening with sugar.

4. First encounter with the Devil — Hawkgirl waits for the bus in Cambridge, Ohio:

Memphis bound. Graceland. Beale Street. All that. All alone. The devil on a bus-stop bench with a Jew's harp and an pork pie hat.

"You looking for a place to go?" he asks.

She's been here before, passing through with her father and brothers on a trip to visit the only two Civil War battlefields in Ohio.

"I say, you looking for a place to go?" he says, louder now, leaning over.

There were things he knew about her too. He knew she never stripped to her shorts to tan on her mother's roof. He knew she wasn't the first girl to talk dirty to a guy. He knew he wasn't the only one who couldn't keep his liquor down.

It was on account of how much he knew about her that he spent that summer grounded, lying around the well-exposed patio like a lizard, changing positions only as the sun changed, listlessly doing homework for a math class he'd flunked, thinking of her and sometimes of God, saving up energy for one or the other. Mathematical equations were full of stories for him then. The thermal energy generated by lying in the sun for three hours and the mechanical energy generated in crashing a car at the bottom of a 20-foot gorge are equal, for example, but the two operations are very different.

Let's say that was his way of knowing she had gone off the deep end.

And let's say he remembers school starting that fall and the rumors about where she'd transferred and why and that sometimes when the school bus he was made to ride went past her house out on North 12th Street, he looked down at her from up there. Let's say she was running on the shoulder of the road. Let's say her legs were pale and that her dark socks sagged around her army boots, that her flushed face was mottled with red stains as big as birthmarks, that her mouth stayed open and her head never turned as she gave ground to his passing bus.Â

Let's say he noticed she still wore his hooded sweatshirt.

Let's say she had on that green canvas knapsack everyone was saying she'd filled with bricks.

The headline reads: A string of planetary pearls shines at dusk this week and next, and she is forced to think of these five Greek and Roman gods as watery gems on a necklace. Gracing what? The neck of heaven?

But she's out there. It's dusk. Warm enough finally to sit out on the steps to the back of the house after the cracked-egg-milky-yellow sun's gone down behind the trees, behind the neighbor's fence.

And she wants to believe it.

Wants to believe that she can see them on the horizon with the naked eye like they said she could.

Wants to believe that Jupiter and Saturn dangle fat and heavy in the hollow of some celestial throat, that Love and War swirl ever closer along the golden chain of their ecliptic arc, that elusive Mercury — messenger of the gods, patron of thieves — is really there after all, lost among the others.

7. Lunch and the origins of Hawkgirl's self-awareness:

The summer after graduation she works a job removing insulation from the old, leafy buildings around the campus of the local community college. She gets used to the heights and the heat, and she comes to like the good, strong smell the leather gloves leave on her hands when she takes them off. She is a deer among bears. She knows what she knows about working with men.

Sometimes asbestos dust drifts into her thermos cup when she reads Dante during lunch break. On the surface of her coffee, the dust motes glitter like distant metal planets.

"Bottoms up, kid," the men say when they catch her staring at her drink or her book.

"Here's to the bull that roams in the woods, you know? Hair on your chest. Go on. Ain't like nothing's gonna kill you or something."

The old man who leads the group mostly shares stories: a homily about this year's tomatoes, the tennis tip his father taught him when he was eight years old and learning the game in South Africa, the last seven words of the dying Christ. Tonight the group meets in a cedar tree house many feet above the forest floor. Vegetarian friendly dinner is done. The air has a chill. The men wear knit hats pulled tight on their heads and thick necklaces woven like ropes. They write in spiral notebooks when the old man speaks. The women hold their knees to their chests. Some sit on the couch, leaning into each other, stroking one another while they listen to the old man.

Name someplace she does.

The old man begins. Three swimmers jumped in, but only two came out. Of the two who came out, one will learn to forget the third. The other will spend his life trying to never remember.

What are the things we want to do while we're alive? Alive.

The old man still wants to meet a Beatle. Wants to learn the Napoleon Dynamite dance. The old woman rolls her eyes. She wants to stop arguing with a husband who won't grow up. Warm laughs. None from Hawkgirl.

Hawkgirl looks at a boy in faded jeans, Birks, a hempy sweater. His black hair is pulled back smooth as a samurai's.

Get shit together for once in your life

"Hawkgirl in High School" comes from a larger collection,Hawkgirl A to Z, a collaboration between R.L. Futrell and P. Kevin Heath. Both have published fiction, poetry and creative nonfiction in various literary magazines and journals, and have had work anthologized in such publications as Flash Fiction Forward (Norton) and Short Prose for Critical Readers. In 2008, R.L. Futrell was awarded an "Individual Excellence Award" by the Ohio Arts Council. They both reside with their families in southern Ohio and teach creative writing courses at Cedarville University, where Dr. Heath is the chair of the Department of Language and Literature.