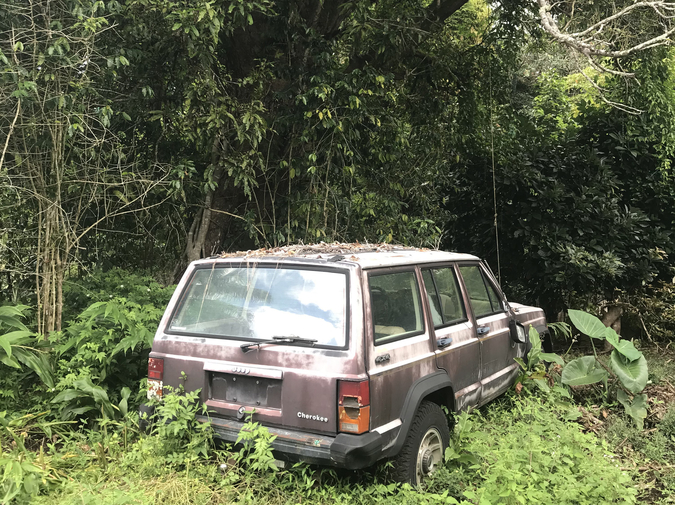 Mama realized she was on the wrong land when her neighbor said, “You’re shitting on my grandmothers grave.”

Mama was constantly licking her fingers and washing her toes while cooking. Sampling, kneading. She learned it from her Mama.

At 22, Mama was pregnant and living under a tarp.

At 23, Mama was running around with a baby in a backpack hiding from helicopters. Her boyfriend Bruno was wanted for growing.

At 24, Mama parked her baby in the bushes to machete weeds.

Mama does not celebrate birthdays.

Mama was hellbent on fixing a road to nowhere. Nowhere was a volcano we’d never see.

When Mama’s first truck broke down and she was more broke than her truck, she trained a fleet of pigs to mush up and down the mountain. With floss as reins, she rode a dozen pink piglets named after her siblings (Theodore I II III IV, William I II III IV, and Magdalene I II III IV) with each foot firmly planted on the backs of two big black mama hogs.

Mama lived on a road nobody bothered except to burn stolen vehicles and poach pigs.

Mama was a truck. A Ford Bronco, to be exact.

Mama had a boyfriend named Wave who she suspected was responsible for the missing tools.

Everyday, Mama reburied the pig. And every night, the mongoose dug it up.

Mama walked through the banana grove with a Bic lighter and torched dry leaves. Once it got out of hand and she burned half the neighbor’s property.

Mama lectured us nightly about dental care. “Don’t be like me,” she said while flossing. Except she wasn’t really flossing but darting around the kitchen, knife in hand, floss hanging from her teeth like wet noodles.

Mama thinks marijuana is overrated. She likes all plants. “I grow plants with all kinds of effects,” Mama said. “What kind of effects Mama?” She grins, “Like ayahuasca.” Then her tone darkens, “Don’t do it without a guide. It’s a death drug. Nobody in our pow wow went there but me.” The next morning, everybody was making scrambled eggs but Mama was nowhere to be seen. Mama was driving 10mph on a highway before she pulled over, tumbled out her truck, and crumpled between two fishing canoes. She gripped the earth, thankful it was there, waiting for it to go away.

Mama used to be neighbors with Terrence McKenna.

“I hear Mama.” It’s the sound of black tarp being peeled back and slugs squealing from salt and vinegar—my favorite potato chip. They bleed white and thick. We put the hula hoop away and get back to work.

Mama had a thing for bath tubs. They were scattered everywhere across her property. Plastic and white and molden. But mama never bathed. Mirrors, too. But Mama never looked at herself long. She preferred the sun.

Mama loved sunsets. The light poured in like peach syrup, then blueberry, then blackberry.

At night, we gather in the kitchen where a single bulb offers an island of light. There, Mama is the star. We use tea candles and saintly candles and white candles. Wax everywhere. What a museum.

Connor Goodwin is a writer and critic from Lincoln, Nebraska. His work has appeared in the The Atlantic, Washington Post, Seattle Times, BOMB, Los Angeles Review of Books, X-R-A-Y, Back Patio Press, Cleaver, and elsewhere. Follow @condorgoodwing.