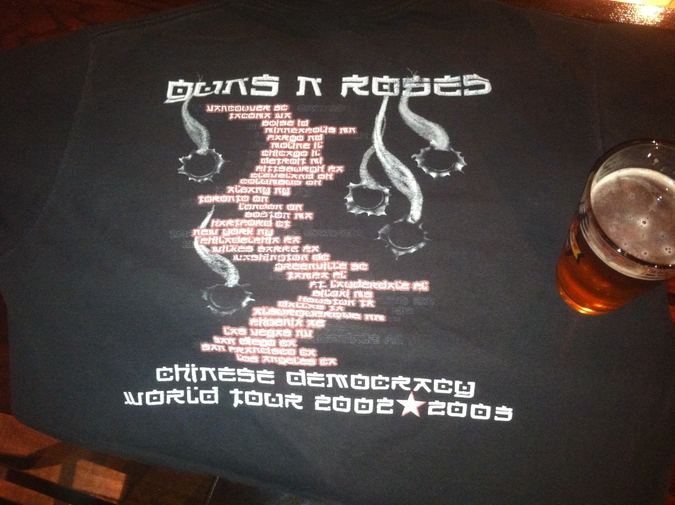 Or rather, it’s meant to look like it’s been peppered with buckshot. The front of my Guns N Roses Chinese Democracy World Tour 2002 ★ 2003 black t-shirt features a simple metallic star with Chinese-ified script spelling G N R across the center, and the full band name beneath. The back, like my favorite concert shirts, features the tour schedule—North America only—listed vertically between several smoking exit wounds, wispy plumes of gunsmoke meandering through the cities and dates.

GNR originally scheduled thirty-two dates for that tour; less than half were played, and the rest were cancelled. The North American leg of Chinese Democracy was meant to start in Vancouver, but that show was cancelled (rioting), and it wouldn’t be the last. Slash and his top hat had left the band in 1996 along with Steven Adler and Izzy Stradlin before him, and by 2002, the Guns N Roses we had bought tickets for was the same band in name only, short of William Bruce “Axl” Rose, Jr., wailing away on vocals. After Vancouver’s cancellation, the Buckethead-era of GNR played Tacoma and Boise, then made its way to Minnesota, to the Target Center in Minneapolis.

November 14, 2002. There were eight of us—me, Kyle, Strokin’, Hinzman, Minck, Mike, Nelson, and Will. And Mike’s mom, Mrs. Rowe, so that’s nine, I guess. I can’t remember if she wouldn’t consent to let him go, or if she felt more comfortable driving than if any of us drove, or really why she was there in the first place, but we piled into Mrs. Rowe's green Dodge Grand Caravan and headed south to Minneapolis from Duluth. As we crested Thompson Hill out of Duluth to hit I-35S proper, I handed her a white Verbatim-brand CD that I had burnt—a GNR mix of Appetite for Destruction, and Use Your Illusion I and II—and she slid it into the dashboard CD player without complaint. It’s so easy to make these albums now before a concert, to queue up the appropriate band or playlist. Not then, though—this was 2002, the heyday of Kazaa and Napster, of really having to earn your pixelated porn and illegal music.

So we rocked out as we barreled toward Minneapolis. At this point, not many of us drank or smoked, and we certainly weren’t going to in Mrs. Rowe’s green Dodge Grand Caravan. We had no way of scoring anything at the concert anyway, but it would have helped, because by the time we parked in the ramp, walked to the venue, and found our seats—row XX, all the way at the top, with a vertical cement wall at our backs—the concert wouldn’t start for another four hours, long after the opening bands had left, damn near midnight. This was how the Vancouver riots had started.

To pass the time, the venue cameras swept the audience, trolling for girls to take off their shirts, flash some chest to the crowd. Some did; most didn’t. I tried not to look Mike’s mom in the eye, as she sat a few seats away from me. I tried not to look in her direction at all. We had no idea how long this would go on for, or whether GNR would even show. Still, it wasn’t a bad time, sitting there at the top, watching the screens and the crowd, talking with each other, wondering if this constituted an adventure or not, a dudes’ road trip, a post-pubescent event. Hard to tell with Mrs. Rowe over there.

Then we met Plasma Guy. Plasma Guy was strung-out skinny, with long, greasy hair under a frayed ball cap. Plasma Guy wore a ragged, black denim jacket that jangled as he moved, and a spiked-and-studded rhinestone belt circled his waist. I can see him still: some sort of 80s rocker vision of the past in dirty dark jeans and combat boots, here to accompany GNR into the future. Plasma Guy walked up, up, up to row XX, double-fisting a pair of plastic concert cups as he climbed toward us, dribbling foamy concert beer (Bud Lite, Miller Lite, Coors Lite, whatever) with each step. “Hey DUDES!” he barked, “fuckin’ Guns and Roses!”

We took up one end of row XX, and Plasma Guy leaned against the wall from the top step, standing parallel with Kyle and me in the aisle between the next row of seats. He cocked one leg up, boot flat against the wall, knee rocking back and forth like a wrecking ball out in front. Plasma Guy was full of questions, and he kept a steady string of conversation going as the minutes turned to hours after GNR was scheduled to appear. “Where’re you guys from? Duluth? Fuckin’ A, man. Fuckin’ A. You seen these guys before? No? Me’neither, man. Me’neither. I was donating plasma, and some guy was like, ‘hey, fuckin’ Guns N Roses is in town,’ and I said, ‘Guns N Roses? I didn’t know that, man! Fuckin’ love Guns N Roses!’ So I bought a ticket, man. I bought a ticket.”

Plasma Guy was harmless. At least, we hoped he was harmless. Safety in numbers, we figured, and Mike’s mom. As he spoke, Plasma Guy kept pounding his points home, slapping one boot against the cement wall as he leaned back, punching the air with his beers. “Guns!” (thwack) “And!” (thwack) “Ro-ses!” (thwack). He kept making trips for more beers, disappearing for 20, 30, 40 minutes at a time, but always he’d return, always raising his cups to us as he passed, always yelling “HEY DUDES!”, always taking up his post to the left of our row at the top of the stairs. Wow, I thought, maybe I should donate plasma. Seems pretty lucrative.

At some point, word got round that Will was doing…something…with some girl at the opposite end of the row. “I think his hand is down her pants,” Kyle said. It was hard to know, because the guys had shuffled Mike’s mom down to our end of the row near Plasma Guy’s vacated post (gone for more beers!), and it was our job to run visual interference for Will until the concert started. Too much staring might attract Mrs. Rowe’s attention, although looking back, maybe she knew anyway—maybe she understood we were seventeen years old, eighteen years old, and at a Guns N Roses concert, and it was inevitable something would happen.

Finally, inevitably, thankfully, righteously, the arena went dark. The crowd roared. Green laserlights began sweeping the audience, and shadowy figures took the stage, backlit by that digital St. Elmo’s Fire, licking at the crowd in neon waves. Looped reverb of the opening to “Welcome to the Jungle” crescendoed for a few minutes, then the lights came up, and there they were—there was Guns N Roses. “Hello, Minneapolis!” Axl howled from underneath a Wolves jersey. Buckethead had a pair of nunchuks lashed to his belt, and the ubiquitous KFC bucket on his head reflected the spotlights as he nodded up and down with the guitars, the drums, the lights, everything. 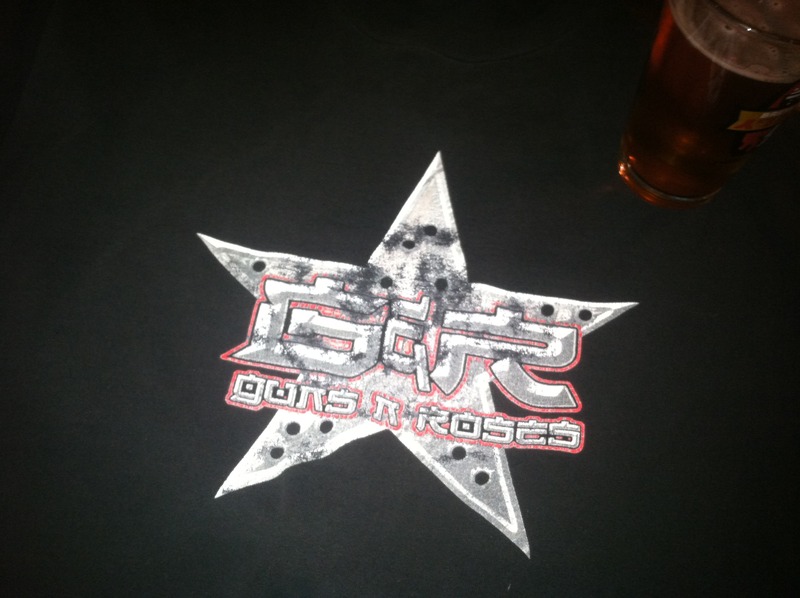 If you closed your eyes, it could have been 1987, Appetite for Destruction tour. Fifteen years later, Guns N Roses—at least this permutation of them—sounded incredible. We wouldn’t have known the difference live anyway—most of us were three years old in ‘87. But we recognized the opening riffs of “Welcome to the Jungle,” stomped our feet to the chorus of “Paradise City” along with Plasma Guy and the nameless girl at the end of the row who may or may not have Will’s hands down her pants, maybe even clapped our hands with Mrs. Rowe. We played air guitar to “Sweet Child O’ Mine,” rocked back and forth to the bitter verses of “Mr. Brownstone.” At some point, some drunken idiot on the floor hurled a water bottle up at Axl, and he picked it up and hurled it back, spewing obscenities. Buckethead put his guitar down and did some nunchuk shit. There was fire and sparks, lasers and smoke.

Later, Plasma Guy started slipping us a few beers. I can’t imagine Mrs. Rowe actually missed this, and I really can’t imagine she condoned it, but I understand, or think I understand, why she let it go, if she let it go at all. If I were the person then that I am now, I would have taken one and been happier for it, but I passed them down to Nelson, to Hinzman, to Will, to that nameless girl at the end of the row, a willing accessory to whatever was going to happen.

What happened was the concert ended, school was almost out, we got older, and most of the people I knew from that concert are no longer in my life. I saw the Rowe family at my wedding, and Kyle and I get together when we can. But most of my friends and most of those people from that time are gone, and in a way, so am I, but I don’t think we’re so different from that GNR lineup, or that anybody is, really. After the heyday, the good times, out of metal and into grunge, the open road of the future, Indiana to LA to Minneapolis, from superstars to has-beens, now holding forth on a much-maligned and never-ending tour, after endlessly reinventing your name, your music, your credo, the past you continually edit to make way for the present, the dwindling future hung heavy on the horizon, empty bottles and trash at your feet, one thing—after who you were and who you are and who you can even maybe still become—one thing is still true. The will to be heard remains. That doesn’t change.

I wonder where some of my old friends are, what became of their lives. Did Strokin’ ever get his nursing degree? Is Nelson still in Duluth? I wonder about Axl, about Slash, about that strange guitarist with the bucket on his head. What I remember most, though—what I have—are those smoking holes. The ones on the back of the shirt. They’re my favorite part. To be shot through with memory—to accessorize memory, to wear it, to recognize and be changed by it—that is the point of this t-shirt, I think. That is what the Guns N Roses Chinese Democracy World Tour 2002 ★ 2003 black t-shirt offers.

Jordan Wiklund is a student in the MFA program at Hamline University. His essays have appeared in Pank, Fourth Genre, Brevity, and elsewhere. He is a contributing editor to Paper Darts, and assistant nonfiction editor to the 2014 edition of Water~Stone Review. He works in Minneapolis as an editor for Quarto Publishing. He is also co-author of Craft Beer for the Home Brewer. He and his wife live in St. Paul, Minnesota. He Tumblrs and Twitters at Jwiklund.tumblr.com and @JordanWiklund, respectively, and can also be found most Sundays at the St. Paul Curling Club, working on his takeouts and draws.